The finger pointing among consultants, pollsters and the media ignores a fundamental truth, writes Jonathon Gatehouse: the Labour leader was a stiff 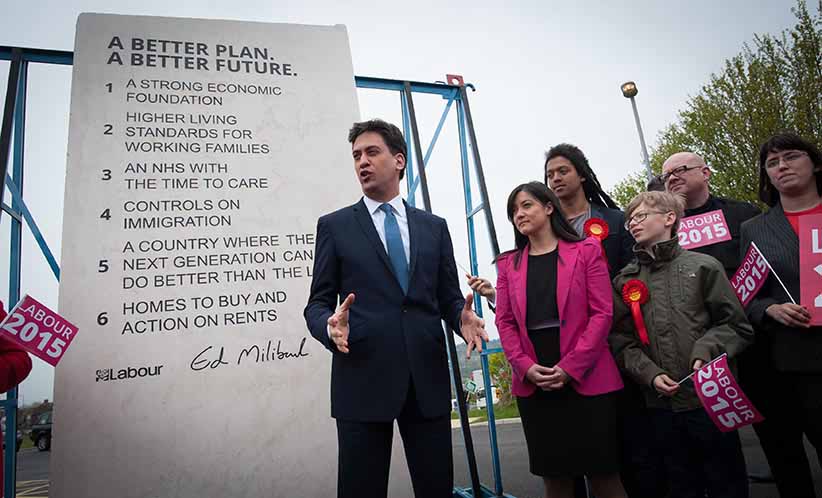 The moment that British voters started fleeing from Ed Miliband may well have come on the final Sunday of the election campaign, when he unveiled a giant stone tablet carved with Labour’s six commandments, like some sort of discount Moses. It’s fun to imagine the strategy meeting where the leader and his backroom gurus hatched the idea. “I’ve got it,” someone must have shouted, “let’s put Ed beside an eight-foot-six-inch limestone slab that will make him look like a hobbit at Stonehenge!” (High fives are exchanged around the table.) Then there must have been a debate about the font. “Let’s make it friendly and easy-to-read, like Comic Sans,” someone probably said. And surely, they then moved on to brainstorming about the pledges themselves. “They’ve got to sound promise-y, but not be the kind of thing anyone could actually hold us to, or even measure,” said a bald man with glasses, stroking his goatee. “How about: A Country Where The Next Generation Can Do Better Than The Last?” (Excited murmuring.) “Eureka!” shouts a woman wearing a beige pashmina. “A National Health Service With Time To Care!” (A frenzy of backslaps and rough hugs. Dissolve.)

Miliband not only went ahead with the stunt, he vowed to erect the monolith in the garden of 10 Downing Street, in a spot he could see from his office window, should the people make him their prime minister. Little matter that such an addition would probably be illegal. (Downing Street, as the Telegraph was quick to point out, is a Grade 1-listed Heritage Building, subject to strict rules when it comes to any and all modifications.) The British public—and most certainly its media— know stupid when they see it. By day’s end, Labour’s slab was being referred to as “Ed’s Tombstone.”

The results of Thursday’s vote certainly point to an exodus, if not the hand of a wrathful, Old Testament-style God. Opinion surveys conducted throughout the campaign had placed Labour neck-and-neck with David Cameron’s Tories. It was a trend that continued right to the finish, with 11 different polls showing the two parties in lockstep, each poised to capture 33 per cent of the vote. Every available seat projection suggested a hung parliament, with the Conservatives winning the most seats, but facing a much harder to path to forming a viable coalition than Labour—a scenario in which Miliband might well have ended up winning, even if he came second.

In reality, it wasn’t even close, with the Tories capturing 37 per cent of the popular vote to Labour’s 31, and taking 331 of the House of Commons’ 650 seats to form a majority government. Labour, battered by the Scottish National Party’s almost-sweep of the far north, sank to 232 seats, 26 fewer than in the last parliament. And Miliband was gone from his job before most people had even finished their morning coffee.

“I take absolute and total responsibility for the results and our defeat,” the 45-year-old said in a televised address from Labour Party headquarters, visibly struggling to contain his emotions. “It’s time for someone else to take charge … The party needs to have an open and honest debate about the right way forward.”

It is, of course, entirely possible that the “science” of polling is now as reliable as the “science” of Tarot cards or reading goat entrails. But the finger-pointing among consultants and pollsters—and the media who bought into their predictions—ignores a fundamental truth: Miliband was a stiff. Even compared to the barely animate David Cameron. (A long profile of his ambitions in The Guardian contained a telling recollection from a friend of Miliband on holiday, sitting on the beach reading a biography of a long dead Conservative cabinet minister.)

His victory over his higher-profile—and frankly, better-liked—older brother, David Miliband, in Labour’s 2010 leadership ran counter to the wishes of the party’s MPs and rank and file. (Ed triumphed on the fourth ballot with 50.65 per cent of the vote, thanks to the support of Labour’s “affiliated” union members.)

In his five years at Labour’s helm, Miliband-the-younger never seemed to settle on the direction he wished to take the party, starting off with a pledge to remake British capitalism, then tacking hard for the centre under the tutelage of American advisers like David Axelrod, the architect of Obama’s presidential campaigns. By the time the writ dropped for the general election, Labour was in many ways indistinguishable from the Conservatives, with a manifesto that promised to crack down on immigration and tame the deficit. Its core “vision” boiled down to dental-soft nuggets like “A Strong Economic Foundation,” entirely forgettable yet suitable for engraving.

Miliband was capable of passion, but rarely demonstrated it in front of voters. Throughout the campaign, his fondness for speaking from behind a lectern—even when standing in a farmer’s field—became something of a running joke. Ballot Monkeys, one of the many satirical election shows aired on British TV over the past month, depicted Labour advisers constantly grappling with their leader’s charisma deficit, and so desperate to make him look decisive that they debate putting out an animated .gif of him stabbing his brother in the back.

In his final big television appearance of the campaign, a special edition of the BBC’s Question Time where a studio audience grilled each of the three main party leaders, Miliband must have started to comprehend what lay in store. After defenestrating Cameron for more than a half-hour, the assembled voters seemed even angrier with Miliband. Especially when it came to Labour’s past record as government. “How can you stand there and say you didn’t overspend?” asked one man. “You ended up bankrupting this country.” By the end of the night, there was a visible sheen of sweat on Miliband’s face. Then, to top it off, he stumbled as he walked off the stage.

Miliband wasn’t the only party leader to fall on his sword. Nick Clegg, who led the Liberal Democrats from coalition partner to eight-seat oblivion, also resigned. So too did UKIP’s Nigel Farage, after his party managed just one seat and he was decisively thumped in his seventh attempt to win entry into parliament.

But the story of the 2015 election will always be about Ed Miliband. The guy who turned a toss-up into a humiliating rout. It’s already written in stone.