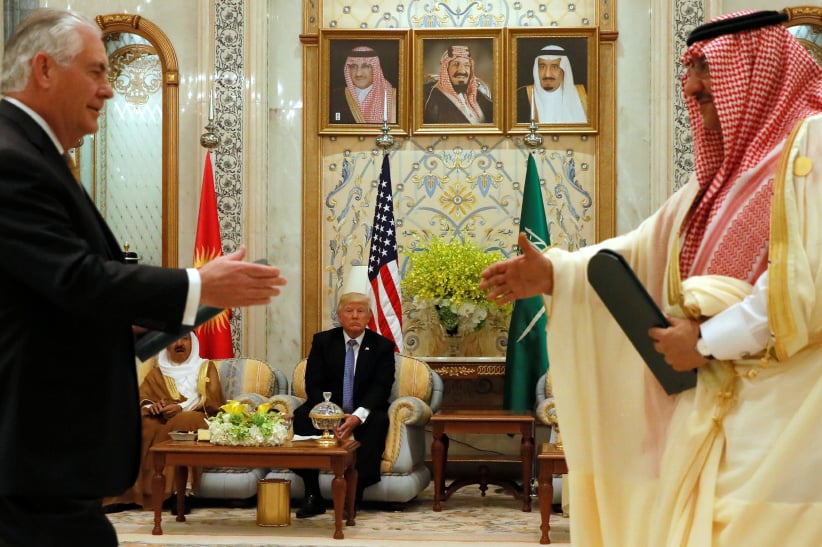 President Donald Trump’s visit to the Riyadh summit in Saudi Arabia has been labelled “historic” and a “turning point.” Much ink has already been spilled about Trump’s first overseas visit being to a Middle East country—the heart of Islam, no less. After all, it was Trump who famously demonized this faith of more than a billion followers—and yet here he was, talking to 50 state leaders of Muslim-majority countries about the faith itself. It was filled with hype and buzz about building tolerance and understanding.

But in fact, it is none of that, nor is it even particularly historic. The meeting is a continuation of a decades-long relationship built on global economics and regime security—and the fact that it can endure even in the face of a massive, inflammatory contradiction like President Trump, it only proves that the relationship is bigger than any one figure.

The U.S.-Saudi relationship is a longstanding one built of mutual interdependence, withstanding continued geopolitical gyrations and successive presidents and kings. Despite being typically different in their cultural mores, the United States and Saudi Arabia since the early 1970s have strengthened their symbiotic relationship built on petrodollars and security guarantees. We need not be surprised that Trump’s Muslim ban and his continued offensive Islamophobic comments fail to shake the U.S.-Saudi relationship.

The particular relationship dates back to the 1970s. Saudi Arabia was the largest oil producer in the world; the United States was the largest consumer of oil in the world and the leading economic and military superpower. The Saudis made a deal to ensure that oil is invoiced in U.S. dollars, known as petrodollars. Invoicing all oil in dollars is upheld, in part, by Saudi Arabia’s position as the world’s largest oil producer and exporter and the chief swing producer in the Organization of the Petroleum Exporting Countries (OPEC).

Giving the U.S. dollar further global economic supremacy supported America’s once-global position as the leading manufacturer of goods and services. Despite shifts in global production to emerging market economies, the United States still benefits significantly from the world needing to have U.S. dollars to buy oil, the most-traded commodity in the world—not to mention the fact that the United States can finance its burgeoning capital account deficit with little international recourse on the value of the dollar. Thanks in part to Saudis upholding the system of petrodollars, the United States prints dollars to increase money supply with little inflationary consequences, which other countries in times of economic stagnation would normally experience.

Accumulating nearly all of its income and wealth in U.S. dollars, Saudis have for decades spent their petrodollars on buying American investments, goods, and services. For the Saudis, petrodollars reinvested into U.S. government bonds allow them to avoid risks of currency conversion. They can also take advantage of preferential access to U.S. government bond markets, given to them in an agreement with the Americans, in appreciation of their continued large T-bill purchases. To recycle or spend their petrodollars to the tune of $700 billion accumulated today, Saudis have a great deal of investments in the U.S., and they also buy an enormous amount of goods and services from the United States.

Among the U.S. goods most favoured by Saudis: high-tech weapons, naval ships, warplanes, helicopters, defence systems, and other expensive military hardware. The American military-industrial complex undoubtedly benefits from Saudi Arabia, and has for some time: Throughout the Obama presidency, for example, U.S. arms sales to Saudi Arabia totalled US $115 billion, and while Trump’s announcement of a deal to sell $350 billion worth of arms to the Saudis over the next ten years—$110 billion of that immediate—seems significant, it is in fact in line with, and not a turning point in, the Saudi-U.S. military relationship. Before this deal in Riyadh, the United States was already the largest exporter of arms in the world, accounting for a third of all world arms; Saudi Arabia is the largest client of all U.S. arms, taking nearly 10 per cent of all U.S. arms exports.

The United States and Saudi Arabia have their economic interests intertwined, but clearly there’s a security angle here, too. For decades, the United States has provided Arab Gulf oil exporters a security guarantee. In essence, the U.S. has promised to come to the assistance of any Arab Gulf country under internal or external attack. Known as the Carter Doctrine, this U.S. policy was in direct reaction to the loss of a once-key U.S. ally, the Shah of Iran, who was overthrown in the 1979 revolution. The American liberation of Kuwait from the grip of Iraq’s Saddam Hussein in 1991 was perhaps the most memorable use of the Carter Doctrine.

For decades, U.S. naval power in the Persian Gulf has both ensured the regime security of Arab Gulf allies and the free passage of oil tankers through the narrow Strait of Hormuz and into the Arabian Sea. Today, the U.S. Navy’s Fifth Fleet naval base in Bahrain is home to 30 U.S. warships and aircraft carriers monitoring nearly 2.5 million square miles of seas to protect its Arab Gulf allies. An abundance of oil on world markets is good for the global economy, and invariably good, too, for the U.S. economy—further reinforcing this economic-security nexus.

Trump’s visit, too, is hardly the first time a U.S. president has troubled the relationship. Today, the Arab Gulf countries claim it is Iran and its proxies in the region that are trying to destabilize their Kingdoms. This is why Obama’s deal with Iran to limit this Middle East country’s nuclear capability to civilian use upset many Saudi and Gulf leaders who believe that Iran is up to nefarious ends in the region. Gulf Arab allies see Iranian-backed movements behind their local uprisings and calls for revolution, rather than recognizing this as disenchantment of religious minorities treated as a fifth column in their own societies. With Saudi assistance, Bahrain crushed its own Arab Spring movement despite the disconcertment of Obama. The Saudi displeasure with Obama’s support of Arab Spring movements and dithering in Syria were abundantly clear—but this could not waiver the U.S.-Saudi relationship, and Obama visited Saudi Arabia four times over his two terms.

And the same has been proven true, in reverse. A few years after the 9/11 terror attacks primarily carried out by Saudi citizens, then-President George W. Bush held the hand of King Abdullah to stroll the gardens of Bush’s Texas ranch. Despite repeated Congressional calls to investigate the Saudi link to 9/11, successive administrations have tried to close this chapter and move on. And again, many U.S. officials and pundits have blamed Saudi Arabia’s extreme Wahabi interpretation of Islam for the rise of radicalization throughout the Middle East, from al-Qaeda to ISIS. And yet, this bilateral relationship of unlikely bedfellows continues.

In the U.S.-Saudi relationship, economics and security trumps values, social mores, human rights, gender rights, and a host of other reasons; it withstands geopolitical gyrations and individual personalities because of its core foundation. So do not believe the hype: Trump’s sword dance this weekend and the adulation bestowed upon him by his Saudi hosts should come as no surprise. Both countries benefit from a symbiotic relationship that sustains America’s global economic position and Saudi Arabia’s regime security that even Trump can’t seem to shake.

Bessma Momani is a professor at the University of Waterloo and senior fellow at the Centre for International Governance and Innovation and at the Brookings Institution.