This means (more) war in Syria

Russia and NATO member Turkey are fighting a proxy battle in Syria, and it’s about to get worse 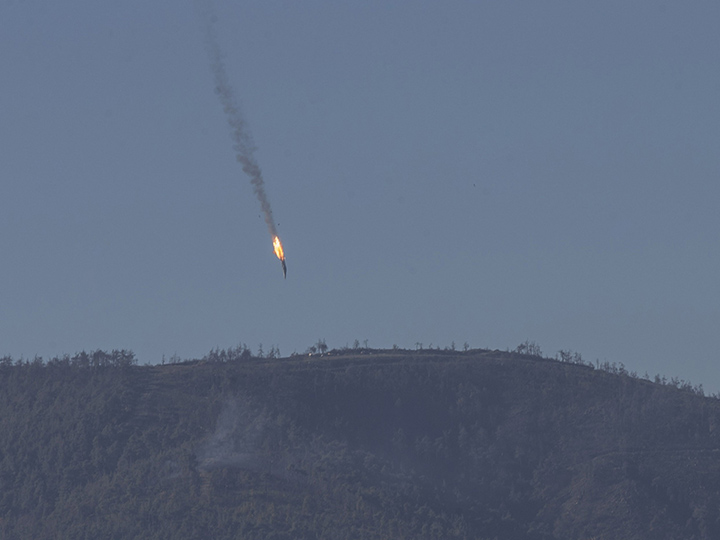 After Turkey downed a Russian bomber in November, saying it had violated Turkish airspace near the Syrian border, a charitable bakery that once fed thousands of internally displaced Syrians may have fallen victim to Moscow’s desire for revenge. The bakery, run by the Turkish humanitarian organization IHH, was destroyed in what the group claims was a Russian airstrike days after Turkish jets shot down the Russian plane.

IHH released video it says shows the destruction of the bakery in the town of Saraqeb in northwestern Syria. Staff had a chance to flee to safety after warning strikes reportedly hit nearby. Russia has not responded to accusations that it launched those strikes. But it has regularly bombed Turkey-backed rebels, including ethnic Turkmen militias in the northwest of the country, trying to topple Syrian dictator Bashar al-Assad, a Russian ally.

Russia intervened in Syria ostensibly to fight the so-called Islamic State, a jihadist group that has taken over large chunks of the country and of next-door Iraq, and that claimed responsibility for the bombing of a Russian passenger jet over Egypt in November, killing 224. A U.S.-led coalition that, for now, includes Canada has been bombing Islamic State for more than a year. But Russia operates outside that coalition and has focused much of its military efforts on other rebel groups that threaten Assad’s rule.

“The fundamental backstory is that the Turks and Russians have found themselves engaged in a proxy war in Syria,” says Asli Aydintasbas, a visiting fellow at the European Council on Foreign Relations. “They are supporting rival sides in a very bitter conflict. The Turks are digging in their heels to try to topple the Assad regime. And similarly, the Russians are digging in their heels to protect the Assad regime. I think this was unavoidable,” she adds, referring to Turkey shooting down the Russian plane.

Turkey and Russia have extensive economic ties, which meant both countries had an interest in avoiding this sort of direct confrontation. Previously, says Aydintasbas, Moscow and Ankara were able to “compartmentalize” their differences. They were at odds over Syria and—because Turkey is a member of NATO—over Russia’s barely disguised invasion of Ukraine, but maintained a functioning trade and tourism relationship.

The downing of the Russian plane—the first time a NATO member state has done so since the Korean War—upends this carefully managed arrangement. It may also have repercussions not only for the Syrian civil war, but also for the already fragile relations between NATO and Russia.

Turkish President Recep Tayyip Erdogan says he is “saddened” by the downing of the Russian plane but has refused to apologize. The plane was targeted after several Turkish warnings to Russia about its planes encroaching on Turkey’s airspace, says Sinan Ülgen, a visiting scholar at Carnegie Europe and a former Turkish diplomat. “That’s the reason why it happened. It was not the first violation,” he says.

Meanwhile, Russian planes flying over Syria will now be armed with air-to-air missiles. Moscow has also announced sanctions against Turkey that will affect imports from Turkey, charter flights between the two countries and Turkish companies working in Russia. Russian soccer clubs have also reportedly been banned from hiring Turkish players during the upcoming winter break.

But Aydintasbas says Russia will likely focus its retaliation in Syria. Russia has deployed sophisticated S-400 anti-air missiles there. This effectively nullifies any prospect of establishing a no-fly zone free of Syrian planes—something for which Turkey has long advocated. Aydintasbas suspects Russia will also intensify its air campaign against Turkey-backed rebels—and, it would appear, bakeries.

Another military response Russia may pursue would be to increase its support to the Syrian Kurdish PYD political party and its military wing, the YPG. The militia, which dominates much of northeastern Syria, is affiliated with the Kurdish PKK in Turkey, which the Turkish government (and, officially, many Western governments, including Canada) considers a terrorist group.

The PYD and YPG have taken large swaths of territory from Islamic State but have stopped their expansion westward at least in part because of Turkey’s opposition to it doing so. “Now part of the equation may be incentivizing the PYD to cross Turkey’s red lines, which have been made clear to them. That’s certainly a threat,” says Ülgen, referring to potential Russian means of punishing Turkey.

Ülgen says Russia’s alleged violation of Turkish airspace—which it denies—must be considered as part of a larger Russian strategy to probe and test NATO’s defences. “It’s very typical of Russian behaviour. It’s not unique. It’s exactly the type of behaviour we saw in the wake of the Ukraine crisis with their violation of Baltic airspace,” he says.

NATO responded to Russian provocations in the Baltics and elsewhere in Europe by increasing its military assets in the region. Member states look set to do the same for Turkey. At a NATO meeting in Brussels this month, Canadian Foreign Affairs Minister Stéphane Dion said member states need to support their Turkish ally. Prime Minister Justin Trudeau, while also affirming Canada’s obligation to stand with Turkey, had previously said of the Russian jet downing that it would not be “helpful” of him to point fingers at one side or the other.

“The fear is that Russia will continue testing Turkish resolve and contesting the airspace near the Syrian border,” says Ülgen. While no one expects all-out war, the potential for clashes involving Russian and Turkish planes, as well as anti-aircraft missile batteries from NATO and its member states, persists. Already confronting an increasingly assertive Russia in Europe, NATO may soon find itself facing off against its former foe in the Middle East as well.