Right-wing National Center for Constitutional Studies has a controversial past 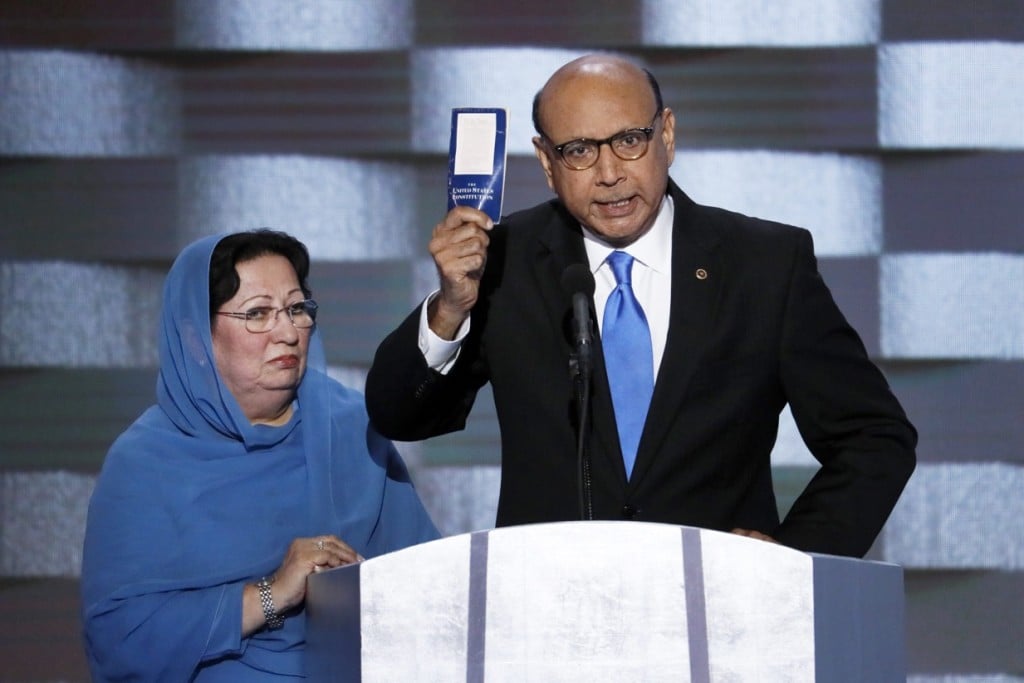 Khizr Khan, father of fallen US Army Capt. Humayun S. M. Khan holds up a copy of the Constitution of the United States as his wife listens during the final day of the Democratic National Convention in Philadelphia , Thursday, July 28, 2016. (AP Photo/J. Scott Applewhite)

NEW YORK – Since Khizr Khan held up a copy of the U.S. Constitution last week at the Democratic National Convention and offered to lend it to Republican nominee Donald Trump, sales for the government’s founding document have soared, with two editions in the top 10 on Amazon.com.

But the most popular text comes from a publisher as far from the Democratic Party as can be imagined.

“The Constitution of the United States,” trailing only the new Harry Potter book on Amazon as of Tuesday evening, was first released a decade ago by the right-wing National Center for constitutional Studies. Founded as The Freeman Institute in 1971, the NCCS was originally led by W. Cleon Skousen, a bestselling historian endorsed by Glenn Beck and others of the right and widely discredited in the scholarly community. Skousen, who died in 2006, was an extreme anti-Communist who had close ties with the far-right John Birch Society.

The NCCS website includes blog posts with such conservative themes as limited government and the importance of religion. The NCCS also has released several controversial books, including “The Making of America,” a history book published in the 1980s that featured an essay on slavery widely condemned as racist and inaccurate. Beck’s support helped revive interest in Skousen’s “The 5,000 Year Leap.”

The centre’s current bestseller, which includes the Constitution and the Declaration of Independence, has a list price of $1.00 and includes no additional political commentary. According to NCCS spokesman Dan Sheridan, 45,000 copies sold between Saturday and Monday.

“I watched the Democratic and Republican conventions, and when (Kahn) pulled out the Constitution I didn’t care which party it came from,” Sheridan said. “What matters is that it promotes the idea of going back to our founding documents and finding out what they’re all about.”

The Constitution is in the public domain and can be published by anyone. Amazon’s No. 5 seller as of late Tuesday was an edition released through CreateSpace, the online retailer’s self-publishing platform. The American Civil Liberties Union has been offering free copies.

Khizr Khizr and Ghazala Khan are the parents of U.S. Army Capt. Humayun Khan, posthumously awarded a Bronze Star and Purple Heart after his death in 2004. From the podium of the Democratic National Convention, Khizr Khan criticized Trump’s position on Muslims and asked whether the real estate mogul had read the Constitution. The edition in his hand had a plain blue cover and did not resemble the NCCS text, which features a drawing of George Washington.