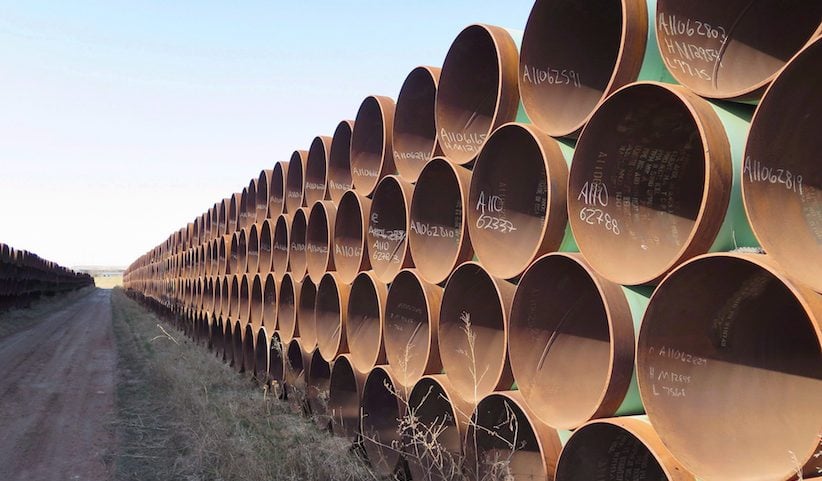 CALGARY – TransCanada launched a double-barrelled legal salvo Wednesday against the U.S. government over its rejection of the company’s proposed Keystone XL pipeline.

The company said it intends to file a claim under Chapter 11 of the North American Free Trade Agreement in response to the decision, which it called arbitrary and unjustified.

The Calgary-based firm said it will be looking to recover US$15 billion in costs and damages as a result of what it says is a breach of NAFTA obligations.

TransCanada alleges that, as a signatory to NAFTA, the U.S. government failed in its commitment to protect Canadian investors and ensure the company was treated in accordance with international law.

Related: What we learned from Keystone XL

In its notice of intent to initiate the NAFTA claim, TransCanada said that the U.S. government concluded five times that the pipeline would not have a significant impact on greenhouse gas production, but still rejected the pipeline to appear strong on climate change.

“Stated simply, the delay and the ultimate decision to deny the permit were politically-driven, directly contrary to the findings of the administration’s own studies, and not based on the merits of Keystone’s application,” TransCanada says in its notice of intent.

“The politically-driven denial of Keystone’s application was contrary to all precedent; inconsistent with any reasonable and expected application of the relevant rules and regulations; and arbitrary, discriminatory, and expropriatory.

“In short, the decision elevated perceptions over reality, which is the hallmark of a decision tainted by politics.”

TransCanada said it has also filed a lawsuit in the U.S. Federal Court in Texas asserting that President Barack Obama’s decision in November to deny construction of Keystone XL exceeded his power under the U.S. Constitution.

In its legal filing for that case, TransCanada said the presidential power Obama used to deny the pipeline is “unauthorized by statute, encroaches upon the power of the Congress to regulate domestic and foreign commerce, has been foreclosed by affirmative Congressional action, and unlawfully exceeds the powers granted to the president.”

The White House and the State Department both declined to comment on the lawsuit or the NAFTA challenge.

When he announced his decision, Obama said Keystone XL was not in the U.S. national interest and took on an over-inflated role in the political discourse between the U.S. and Canada. Still, the 1,900-kilometre pipeline, which has been in limbo for more than seven years, has at times been an irritant in relations between both countries, with former prime minister Stephen Harper at one point calling the project’s approval a “no-brainer.”

The development, which also became a focal point of environmental protests, would have shipped bitumen from Alberta’s oilsands through a pipeline hub in the Hardisty area to U.S. Gulf Coast refineries.

TransCanada said it had every reason to expect the pipeline would be approved since it met the same criteria as previous pipelines that were sanctioned.

Adam Barratt, a spokesman for Foreign Affairs Minister Stephane Dion, had little to say on the matter Wednesday, although he noted the lawsuit is “not entirely unexpected” and falls within TransCanada’s purview.

“We’re aware of recent developments with this file and TransCanada,” he said. “As this is a matter which is expected to go before arbitration, or before a court, we don’t have a comment at this time.”

Environmental groups were quick to criticize TransCanada’s move, saying the legal actions won’t get the pipeline built. They also accused the company of exploiting provisions in NAFTA.

“This is about a foreign company trying to undercut safeguards that protect the American people,” said Anthony Swift, director of Natural Resources Defense Council’s Canada project.

TransCanada has to wait until six months after the date of the rejection before filing a request for arbitration under NAFTA. After the request is filed, arbitrators are selected and further timelines are established.