Trump claims that Obama is directly supporting a terrorist organization 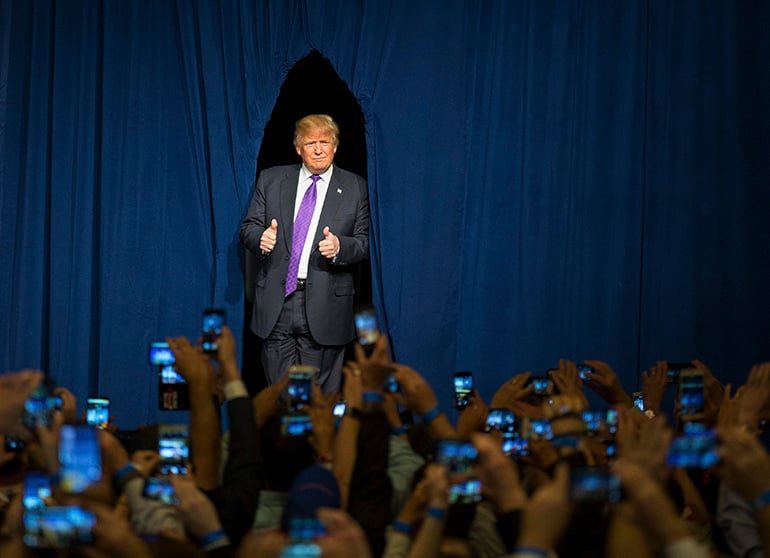 WASHINGTON — Donald Trump’s latest accusation against President Barack Obama — that he’s putting U.S. enemies ahead of America’s own people — is thrusting him into uncharted territory for the presidential candidate of any major political party.

Trump spent the first days following the Orlando nightclub massacre hinting Obama was sympathizing with or even supporting terrorists. Some of those times he said he was repeating what “many people” believe — one of the presumptive Republican nominee’s favourite ways to sprinkle conspiracy theories into the presidential campaign.

By Wednesday, Trump abandoned the innuendo and embraced a more pointed accusation against Obama.

“Media fell all over themselves criticizing what Donald Trump ‘may have insinuated about ?POTUS.’ But he’s right,” Trump posted on Twitter. The message included a link to a story by Breitbart News, a Trump-friendly website, that claimed to have proof the Obama administration backed a terror group in Iraq.

It was unclear whether Trump wrote the message himself or was retweeting someone else’s words. But in either case, it was an effort by the GOP’s White House pick to explicitly link the sitting Democratic president with those seeking to harm Americans, just days after 49 people were killed and dozens more wounded in Florida.

For years, Trump has been the most high-profile proponent of the “birther” movement that falsely claims Obama is a Muslim who was born outside the United States, when in fact he is a Christian born in Hawaii. The businessman has also floated debunked conspiracy theories about former rival Ted Cruz’s father being involved in the assassination of President John F. Kennedy and Hillary Clinton playing a role in the death of former White House aide Vince Foster.

For Republican officials already struggling with whether to fully embrace him, Trump’s willingness to engage in stories usually limited to supermarket tabloids is only making their options more complicated.

In a statement to The Associated Press on Tuesday, Trump said Obama “continues to prioritize our enemy over our allies, and for that matter, the American people.”

Clinton, who will face Trump in the November election, quickly challenged Republicans to either “stand up to their presumptive nominee” or “stand by his accusation about our president.”

Trump’s suggestions about Obama come as the president takes a more active role in the White House race. In a blistering speech Tuesday, Obama said Trump was a “dangerous” threat to national security and was putting America’s religious freedoms at risk by calling for a temporary ban on foreign-born Muslims entering the U.S.

But the White House has avoided commenting on Trump’s attempts to link Obama to terrorism, calling the matter “small.”

Trump has offered no verifiable information to back up his assertions. His theory was not supported by the document cited in the report he linked to Wednesday — a secret 2012 Defence Intelligence Agency analysis. The Breitbart story, citing that document, suggested that the United States was in league with al-Qaida in Iraq, the precursor to the Islamic State.

Instead, the document states generally what was widely known at the time — that “the West, Gulf countries, and Turkey support the opposition” to the government of Syrian leader Bashar Assad.

The U.S. backs several anti-Assad rebel groups but does not include al-Qaida in any negotiations or material or financial support, even as it fights Assad’s government. Whether the U.S. co-operated with figures from that group is not addressed in the document.

Trump did not mention the report or his broader accusations during a rally Wednesday in Atlanta. But some of those in the crowd said they were on board with the candidate’s assertions.

“I think he’s dead on the money,” said Brad Butler, a 45-year-old Trump supporter from Dallas, Georgia. “So this is Islamic terror and this is his religion. Why would he (Obama) be mad at it?”

Diane Gurganus, 70, from Jefferson, Georgia, said she, too, believed Obama was a Muslim whose religious beliefs were affecting the way he has responded to Islamic State militants and the Orlando attacks.

“It’s like his agenda is to destroy America in everything he’s done,” she said.