'We need help from every country that will give it,' government minister says 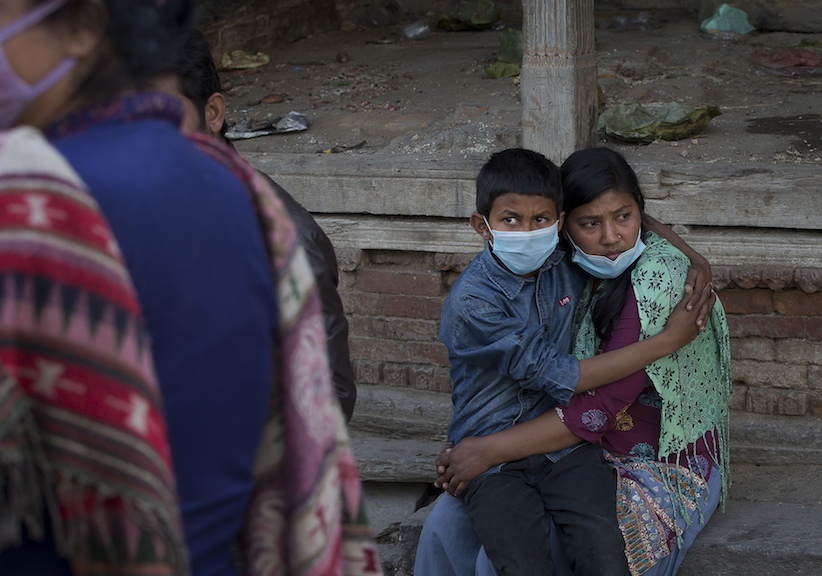 Monika Basnet, 15, right, holds her brother Munal Basnet, 10, during the cremation of their father killed in Saturday’s earthquake, at the Pashupatinath temple, on the banks of Bagmati river, in Kathmandu, Nepal. (Manish Swarup, AP)

KATHMANDU, Nepal — For hours after Nepal was shaken by one of the most intense earthquakes here in nearly a century, 12-year-old Neha Chumda screamed for help.

She had been inside her family’s four-story villa in Kathmandu when the tremor struck unexpectedly Saturday. And in the life-or-death seconds that followed — when her home swayed at its walls began cracking apart—she and 11 members of her family rushed to get outside.

They all made it—except Neha, who was pinned in a room between the second and third floors, which had collapsed onto of each other.

“She was crying for so long, we tried to help her,” Transport Minister Tek Bahadur Garung said of the girl, who is the daughter of one of his cousins.

The cries turned faint, then ceased by the time Nepalese army troops and security forces began trying to break through the front of the house to pry Neha out at 4 p.m. Saturday. Then for a day and a half the soldiers used hammers, crowbars, shovels and a generator-powered saw and small jack-hammer to tear open the front of the house, then bust through the ceiling into the second floor.

By Monday morning, they could see Neha’s lifeless body curled up, covered in dust, a single elbow poking out above them. Then, at 10 a.m. — 42 hours after the rescue operation began — they finally pulled her out. They lowered her gently into a rainbow-colored blanket that served as a makeshift stretcher, then placed her on the grassy ground outside, where four members of her family wept, their red-eyes filled with tears.

“We have manpower. But we don’t have nearly enough equipment to do the job,” Garung said of his government’s rescue efforts. “We need help from every country that will give it. We need bulldozers, cranes, scaffolding, machinery.”

Speaking outside the girl’s home in a black tracksuit, with dozens of distraught residents looking on, Garung said: “There are a lot of dead bodies here and it’s very difficult to get them out. We can’t do it with crowbars” alone. 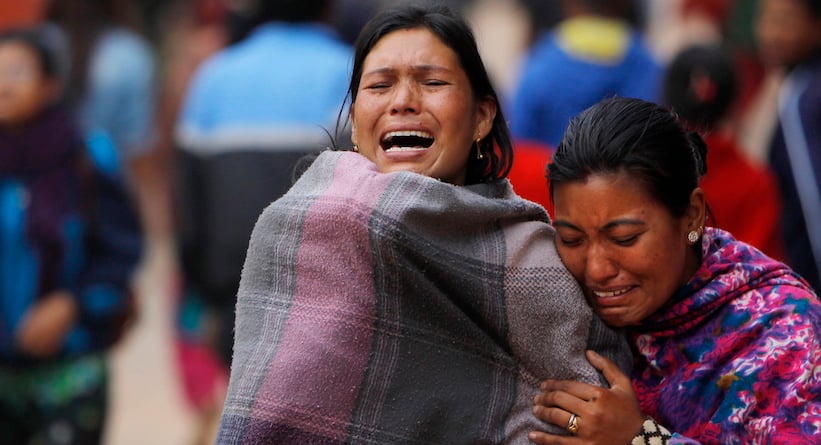 Family members break down during the cremation of an earthquake victim in Bhaktapur near Kathmandu, Nepal. (Niranjan Shrestha, AP)

The estimated death toll from Nepal’s earthquake soared past 4,000, and could go much higher if it turns out that vulnerable mountain villages— where information is still scarce and rescue workers are still struggling to reach—were hit hard.

The catastrophe has overwhelmed Nepal’s government. Garung said the Cabinet was meeting daily, but “we don’t know what to do in such a situation … this is very hard. It’s a big problem. It’s a mess.”

Although the vast majority of Kathmandu’s five and 10-storey buildings actually withstood the quake and still stand, many have been damaged and it’s unclear whether they are still safe. On the four-lane road that runs up a hill near Neha’s home, most buildings looked undamaged. But half a dozen were in ruins and several multi-story apartment blocks were tilting precariously, one at a 60-degree angle.

Many people have camped outdoors in the chilly night cold since the quake, some in tent cities in grass parks where thousands have congregated. Tens of thousands more squat on sidewalks and roads—anywhere but their own houses —fearing aftershocks that have shaken Nepal repeatedly. At one of the city’s international hotels, foreign guests have done the same, dragging bed-sheets and pillows into gardens outside and sleeping on lounge chairs by the pool.

For many, uncertainty reigns. It is unclear what is happening and when help might be on the way. Power lines are down, cellphone connections are sporadic at best, and most shops and banks are closed. Long lines have also formed at gas stations as critical fuel supplies run low.

Just behind Neha’s villa, another much larger operation to recover bodies was underway. Nepalese troops and Indian emergency rescue crews were scaling part of a green, three-story building with orange columns that had been destroyed.

Authorities estimated a couple dozen people died inside the structure, most of them were Christians attending a church meeting. P.B. Bista, a police officer in the area, said 13 bodies had been recovered since the previous day, and six had been pulled from the rubble.

On the ground outside, the emergency workers brought a shattered wooden donation box filled with Nepalese rupees. The words “Youth Gospel” and “Luke 6:38” were written across its top. Beside it sat a black-bound Hindi language bible covered in dirt and a plastic bag of yellow biscuits. 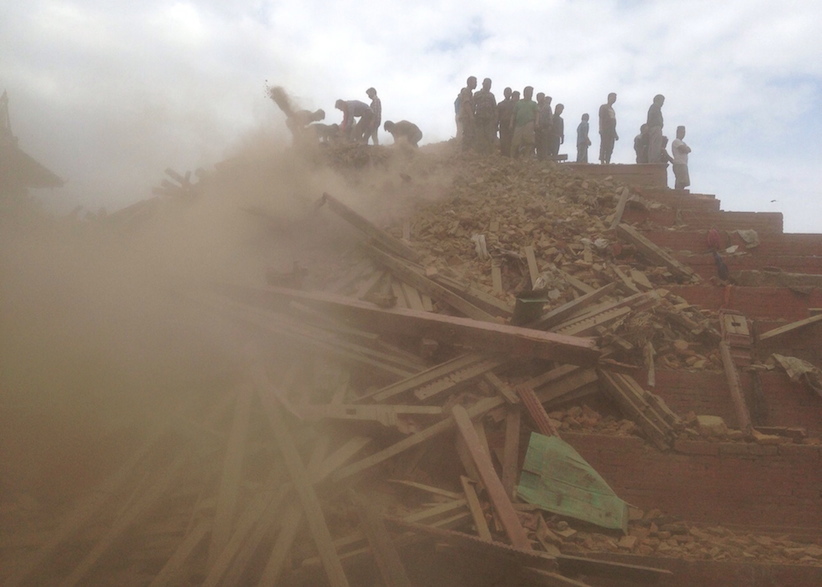 Volunteers help with rescue work at the site of a building that collapsed after an earthquake in Kathmandu, Nepal.

Nepal is an overwhelmingly Hindu nation and has a small Christian population who comprise 1.4 per cent of the country’s 27 million people.

Amir Amang, who worked at the church, which was on the second floor, said one of those rescued had been saved after midnight. But he said four of his family members had been found and taken to a morgue. He said they were a niece, a sister, and two aunts. His father was still missing.

“I am shattered. I’m getting very emotional,” he said, before waving his hand to indicate he could no longer speak, and walking away.

As he spoke, rescue workers brought down body after body—seven in the space of one hour.

When the first man came on a yellow plastic stretcher, wrapped in a curtain with yellow and blue flowers, his brother began sobbing, putting his palms across his eyes. The dead man was face down, one of his fists still tightly clenched. He was placed, like the rest, on a plastic Pepsi advertisement torn from the building’s wreckage.

Navraj Bhatta said the victim was a 25-year-old relative, a high-school science teacher named Rajendra Bhatta. He said the man had just eaten at a second-floor restaurant called Daniel’s Cafe with one of Bhatta’s relatives when the quake hit. The two were on the way out, but the teacher stopped to go to the bathroom.

Navraj said the family would take Rajendra’s body to Hindu temple where he would be burned on a pyre by the Bagmati River. But he said there were long lines there and he was unable to say when it could happen.

Navraj said Rajendra might have survived if the city’s notoriously lax building codes were enforced.

“There are many rules, but no one enforces them, nobody checks,” he said. “There is a lack of education, a weakness of government. But I can’t blame anyone—this was a natural disaster, nobody ever wanted to see it happen.”