Walter Scott is dead. The cause? American exceptionalism. 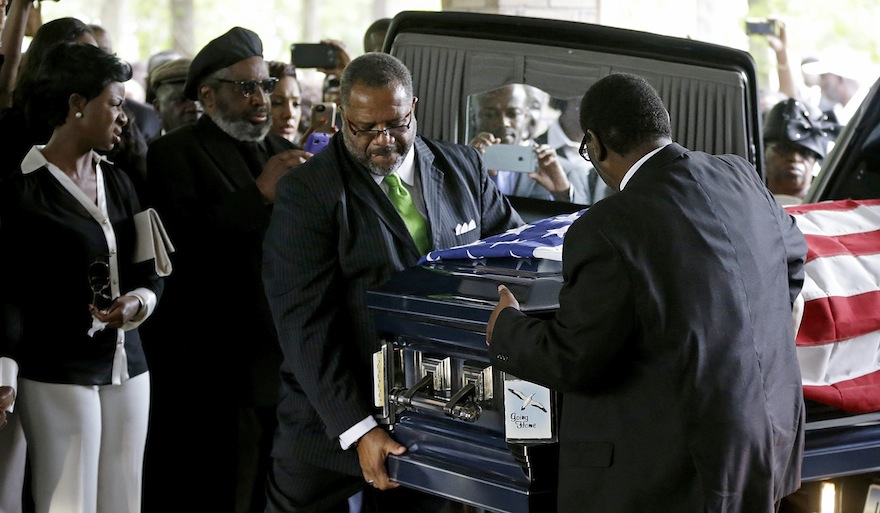 The casket of Walter Scott is removed from a hearse for his funeral at W.O.R.D. Ministries Christian Center, Saturday, April 11, 2015, in Summerville, S.C. (AP Photo/David Goldman, Pool)

Walter Scott, a retired Coast Guard sailor, was stopped by the North Charleston police for a broken taillight, and was dead moments later. He was shot in the back. One more name, one more civilian killed by American exceptionalism.

No one is sure exactly how many people die at the hands of the police in the United States every year. Last month, a White House task force created by President Barack Obama in the wake of the riots in Ferguson, Mo., recommended that the federal government should try to count, by collecting these data from local police forces. Notionally, the FBI already has this responsibility and it reports that the number hovers around 400 deaths per year. But an online effort to collect media accounts of fatal police encounters, and to crowd-source the fact-checking, has arrived at a much more grim and more widely accepted figure: more than 1,100 killed in 2014.

There are many factors that help to explain why American police kill civilians at a dramatically higher rate than in any other developed country, but three deserve special attention as being unique to the United States. 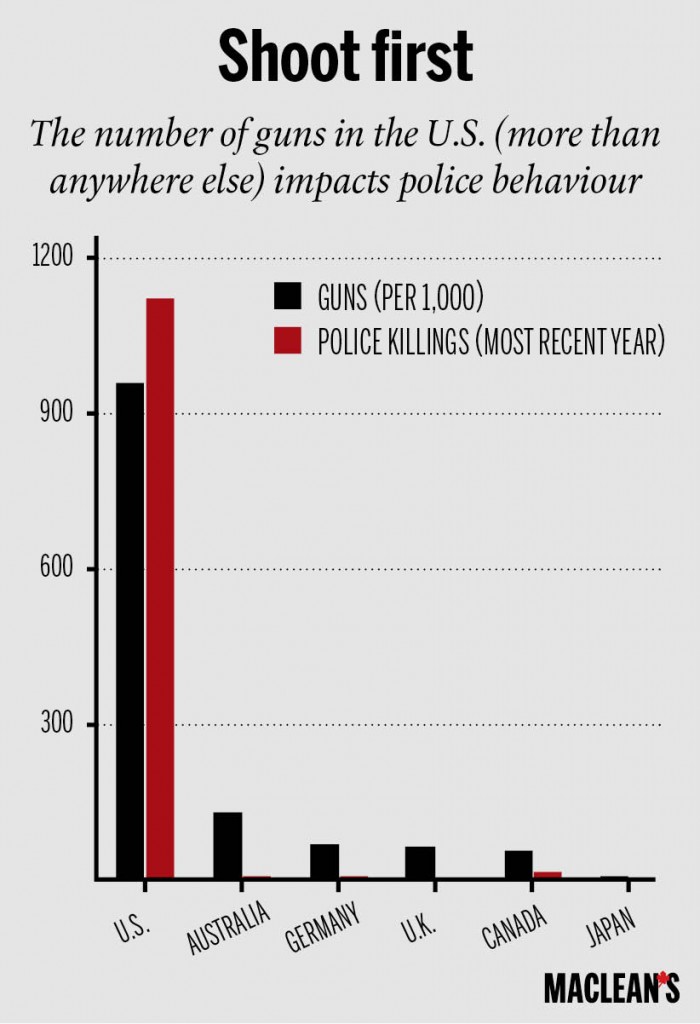 First, there are more guns per capita in the United States than in any other country in the world. Estimates vary from 270 million to 310 million legal and illegal guns in circulation. This provides almost one gun for every man, woman and child. A recent study in the American Journal of Public Health reported that one in three households contains a gun. This is down from one in two in the 1970s, but gun ownership is still 35 per cent higher than the next-highest country: Serbia.

This directly changes the way that American police forces operate. With so many civilians carrying guns, is it surprising that the police shoot first and ask questions later? In fact, American police are at relatively more peril than their counterparts elsewhere. According to the FBI (so perhaps take this with a grain of salt), approximately 50 officers are “feloniously killed” in the line of duty each year.

This has, understandably, created a police culture that is both defensive and aggressive. One small example that illustrates this involves car chases. In the United Kingdom, police cars box in fleeing vehicles and use “rolling roadblocks” to force them to stop. But American police, assuming all suspects are armed, use the more violent and potentially lethal “PIT manoeuvre” to swerve into the rear bumper of the car being chased, sending it crashing off the road.

The second factor is that America remains one of the most racially divided countries in the world. Last year, the Public Religion Research Institute released a study showing that the average white American has 91 times more white friends than black ones. In fact, three-quarters of whites don’t even have one black friend. This racial divide has real consequences. For most white cops, their references for understanding black Americans must come from second-hand sources or popular media; in other words, from rumour and rap songs. This is something that needs to be considered when trying to understand why young, black males are 21 times more likely to be shot by the police than their white counterparts, as revealed by the analysis of independent news organization ProPublica.

The third uniquely American factor is the embattled-hero mythology that surrounds the police. In no country are the cops as lionized as they are in the United States. Not even Canadians, who place the “Mounties” at the centre of their national identity, elevate the police to such heights. From The Lone Ranger to Hill Street Blues and CSI: Miami, American culture has constructed a pervasive narrative of the imperilled but noble police officer, courageously risking his life every day on the thin blue line between civilization and murderous chaos.

But this portrayal is very misleading. In reality, America is not being threatened by criminal anarchy. While the number of civilians being shot by police has never been higher, incidents of violent crime have dropped more than 50 per cent since the 1990s. Yet local police increasingly arm themselves with preposterously lethal equipment. Consider the small town of Sweetwater, Fla. It has a population of only 13,000, slightly smaller than that of Kenora, Ont. Yet the local police force has its own SWAT team, a mine-resistant armoured vehicle, a “commando” armoured car, four light attack helicopters, 20 M16 machine guns and a grenade launcher. These weapons were never designed to “serve and protect”; they are only suited for killing and conquering.

And the myth of heroism? In spite of all the guns, being a policeman in America is actually a relatively safe profession. Loggers, roofers, carpenters, farmers, construction labourers, even garbagemen, are far more likely to be killed on the job. But when they die in the service of the community, there are no televised funerals, no flag-draped coffins.

Alexis de Tocqueville was right when he wrote about American exceptionalism in 1835. It is a remarkable nation with countless unique qualities that other countries struggle to emulate. But it has uniquely dangerous problems, too, which can combine into toxic moments, such as the one we watched last week, as Walter Scott ran away, stumbled, then fell, six bullets in his back.