What China hopes to get by detaining Canadians

China doesn't expect Canada to suddenly cave. The detentions are theatre for a domestic audience—and they will not be the last. 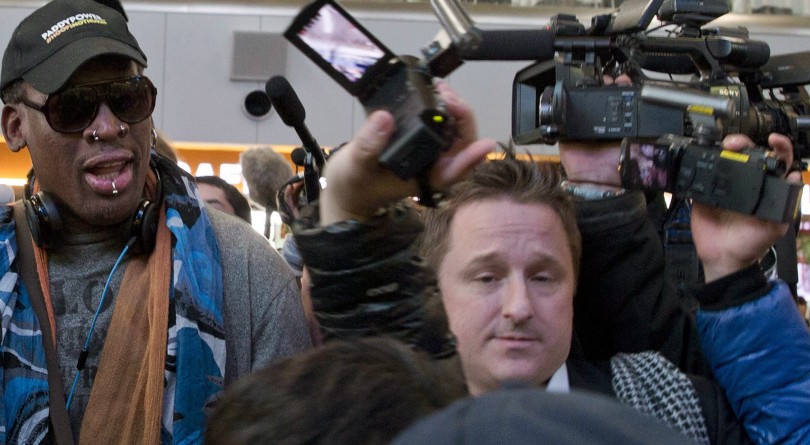 Canadian Michael Spavor is seen with former NBA star Dennis Rodman on arrival at the capital airport in Beijing, China, for a flight to North Korea on Dec. 19, 2013 (AP Photo/Ng Han Guan, File)

When China issued threats and then detained a former Canadian diplomat Monday night, followed by a second Canadian on Wednesday, it seemed like a pretty clear case of tit for tat—Canada arrested one of ours, Huawei CFO Meng Wanzhou; we will take a few of theirs, and that’s how this will get resolved. Except it wasn’t.

China knows how the Canadian judiciary works. Yes, the observers are correct when they say the detention of the Canadians was retaliation for the arrest of a top Huawei executive in Vancouver on Dec. 1. But it was not a pressure tactic.

China does not expect the Canadian government to perform any political intervention into an independent judiciary. It is not expecting some perverted swap of detainees. Even as China threatened “serious consequences” if the telecommunications giant Huawei’s Meng is not released following her arrest for possible extradition to the U.S., it understands full well how the rule of law works in Canada.

The detention of Michael Kovrig, an ex diplomat who now works for the International Crisis Group, and Michael Spavor, a Canadian best known for becoming an emissary to North Korea, is theatre for a domestic audience—and such theatre is important in China.

Consider an incident in 2001, when China took a different tact. A U.S.-Chinese military plane collision ended up with a dead Chinese pilot and China’s detention of the American air crew. Compared to today, China then took a relatively moderate approach, releasing the crew after the United States issued an intentionally ambiguous statement that both sides could interpret differently to save face.

READ MORE: For once, Canada didn’t cave in to Huawei

But the United States took a harsher tone soon afterward, and that “made Chinese leaders’ restrained response look weak in the eyes of the Chinese people,” according to the Journal of Chinese Political Science. “Many Chinese were disappointed, and privately criticized the Chinese leadership. There were rumors that the military was dissatisfied too.”

Perhaps that had been a lesson that showing restraint instead of aggression would not be well received by the people. The goodwill of the people, after all, is more important when there is no democracy.

In Netflix’s House of Cards, the Russian president tells his American counterpart: “If people don’t like the job you’re doing, they vote you out of office. If they don’t like the job I’m doing, they topple statues. Blood is spilled. Chaos takes over.” Similarly, China watchers have been warning chaos is not an impossible prospect.

A rise in outward migration of the elite and political repression under President Xi Jinping are among factors that indicate the current government is increasingly vulnerable, Prof. David Shambaugh of George Washington University wrote in 2015 in the Wall Street Journal. “The endgame of Chinese communist rule has now begun, I believe.”

Since then, Xi has increasingly intensified propaganda and consolidated power in the face of a sluggish economy and public-health and financial scandals. The Asia Times dubbed the middle of this year “China’s summer of discontent.”

The people that China needs to keep happy can understand the concept of rule of law on an intellectual level, but emotionally, it is likely a more alien concept. For thousands of years, China’s judges and prosecutors were the same person: the county magistrate, an arm of the government. Sometimes the emperor even directly participated in the process by approving or denying executions. “The rule of man, rather than the rule of law, is very deeply rooted in the Chinese legal culture,” according to the Global Media in China journal.

It would not be too much of a stretch to conclude the average Chinese person will assume the arrest of Huawei’s Meng was at least in part politically motivated and could thus be resolved though political means.

After all, the waters were greatly muddied on Tuesday. Meng was arrested in Canada after a request from the United States, where she faces charges related to violating international sanctions against Iran, which she denies. U.S. President Donald Trump said he may be willing to intervene if it could help with his Chinese trade talks or “national security.”

Such theatre is essentially propaganda, a move made purely for the effect it will have on the minds of the people. And propaganda has been a cornerstone of the Communist Party of China.

The detention of two Canadians so quickly in succession suggests these cases may not be the last.