Why is Canada making arms deals with the Saudis? 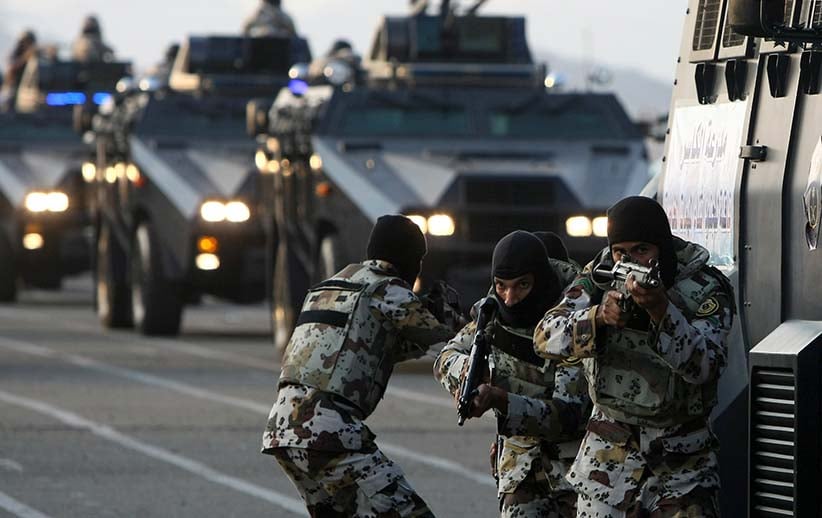 Saudi special security forces show their skills during a military parade at a base near Mount Arafat, southeast of the holy city of Mecca, on November 22, 2009.  (Mahmud Hams/AFP/Getty Images)

Canada’s new Liberal government is learning that righteous indignation regarding foreign policy is easier out of office than in.

A federal Crown corporation under Canada’s previous Conservative government brokered a $15-billion deal to sell weaponized armoured vehicles that will be manufactured by General Dynamics Land Systems in London, Ont., to Saudi Arabia’s National Guard. After the deal was announced in 2014, Gerald Butts, principal adviser to Liberal leader Justin Trudeau, took to Twitter to pour scorn on the Conservatives. “Principled foreign policy indeed,” he wrote while retweeting a post that compared Saudi Arabia to the so-called Islamic State terrorist group. Butts remained Trudeau’s chief adviser after the election.

Roland Paris, then a professor at the University of Ottawa and now a senior adviser to Trudeau on foreign policy, told the CBC last fall that because we didn’t know whether Canada had obtained assurances from the Saudis that they wouldn’t use arms against civilians, “we’ve allowed an arms sale to trump human rights.”

The Liberals are now letting the arms deal go ahead, with explanations that have shifted from Trudeau’s claim that the cannon-mounted machines are just “jeeps” to Foreign Affairs Minister Stéphane Dion’s statement that Canada’s allies are selling weapons to Saudi Arabia, too.

Dion has reportedly said the Saudis have committed not to use the vehicles against civilians, but the department of Global Affairs Canada could not, by the time this article went to press, provide Maclean’s with details about those alleged assurances—which in any case would be next to meaningless. What government has ever said it plans to kill innocent civilians? The fact remains that the vehicles are going to a country with a horrendous human rights record and will be used by its National Guard, which is tasked with protecting against internal threats.

The Conservatives now say the government should publicize its assessment, if it has conducted one, of what the arms deal will mean for human rights in Saudi Arabia—something the Tories refused to do while in office.

Lost in all this posturing is the question of exactly what sort of relationship Canada has with the Saudi kingdom, and why it is seeking to deepen its commercial aspects. Speaking to the CBC, Canada’s former foreign minister John Baird said Saudi Arabia and Canada don’t share many values but have common interests. A list of these would include: opposition to Iran; support—muted in Saudi Arabia’s case—for Israel; a stable global oil market; and, ostensibly, opposition to terrorist outfits such as al-Qaeda and Islamic State. Saudi Arabia’s ruling House of Saud also presents itself as a force for stability in the region, warning that what might follow its overthrow would be infinitely worse even than a regime that beheads people for “sorcery.”

Britain is also an ally of Saudi Arabia. Pressed by a journalist recently about why Britain supported Saudi Arabia’s should-have-been-farcical bid to sit on the United Nations Human Rights Council, Prime Minister David Cameron was more forthright than Western politicians typically are on the matter. “We have a relationship with Saudi Arabia, and if you want to know why, I’ll tell you why,” he replied testily. “It is because we receive from them important intelligence and security information that keeps us safe.”

But according to Wesley Wark, a visiting professor at the University of Ottawa’s graduate school of public and international affairs: “The Saudi regime is notoriously difficult even for much closer allies than ourselves to exchange intelligence with. This has been a problem that the Americans have had for a very long time.” Canada enjoys a close intelligence-sharing relationship with America, and presumably is privy to at least part of what Saudi Arabia is willing to share with Washington as a result. But as for bilateral co-operation, “every indication is that our intelligence relationship is almost non-existent,” says Wark.

Complicating matters is Saudi Arabia’s habit of funding religious schools and mosques around the world that adhere to its extreme and intolerant Wahhabi version of Islam. Saudi Arabia has backed jihadist groups, too, notes Thomas Juneau, formerly a strategic analyst at the Department of National Defence and now an assistant professor at the University of Ottawa’s graduate school of public and international affairs. “That being said, Saudi Arabia is target No. 1, or close to target No. 1, for al-Qaeda or Islamic State,” he adds. “Saudi Arabia is actively fighting against these groups, like we are.”

Did these factors influence the former Conservative government’s decision to push for the arms deal, or the current Liberal decision to let it go ahead? Probably not. The deal may open doors in Saudi Arabia for Canadian diplomats and businesses. Juneau calls it “a nice business card.” But it’s not going to fundamentally change Canada’s security relationship with Saudi Arabia.

The deal is about money, jobs and bolstering Canada’s defence industry. Call it pragmatism or cynicism. Turns out those reasons are just as persuasive to Liberal governments as to Conservative ones.