Why don't Jews speak openly and critically about Israeli policy, as the Gaza conflict rages on? Thinly veiled anti-Semitism. 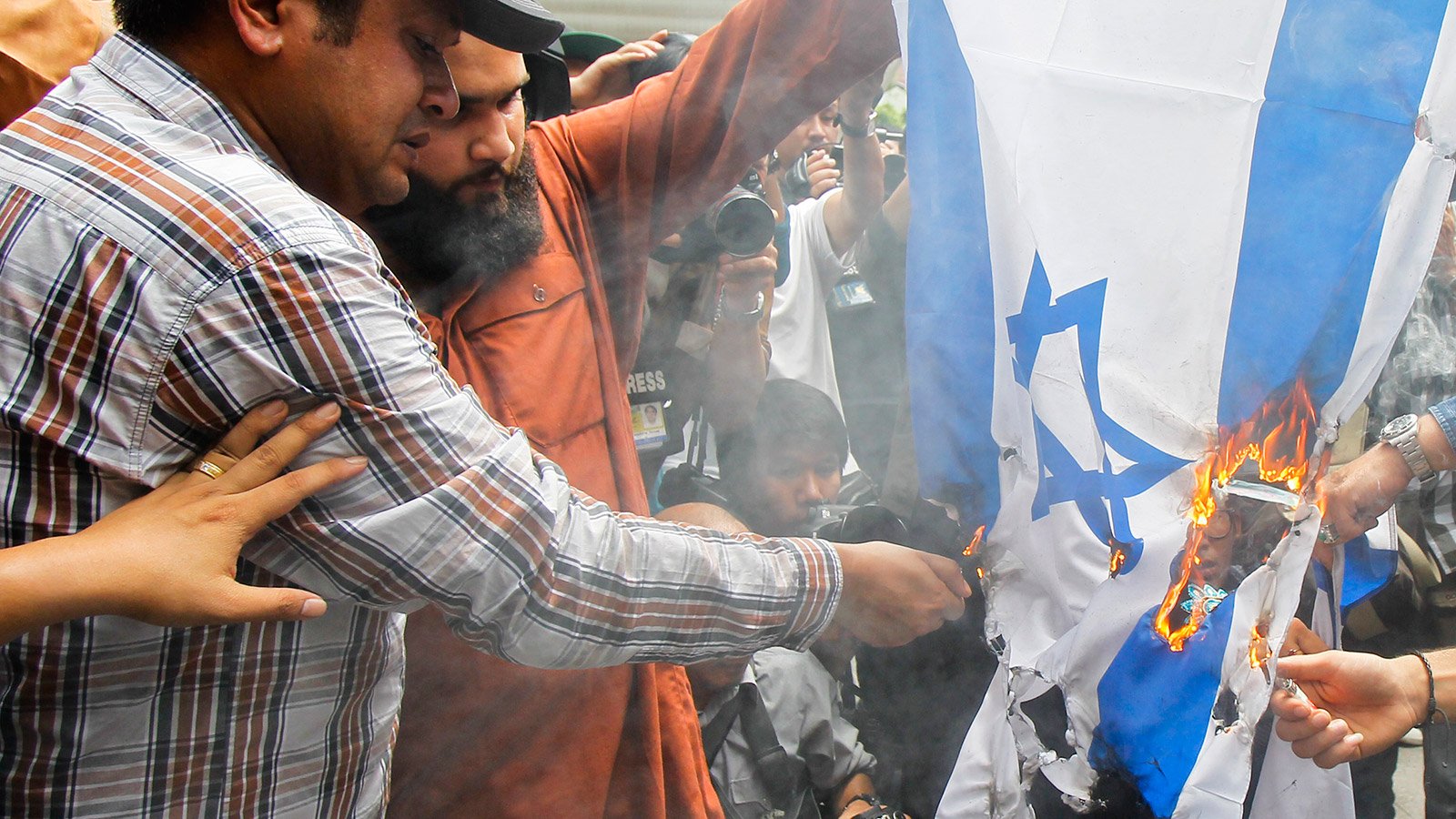 A few weeks ago, before Hamas began launching rockets indiscriminately at Israel’s major cities and Israel bombed the Gaza Strip, killing 182 people, I saw something in a north Toronto camping store that made my stomach turn. This particular store caters predominantly to the Jewish neighbourhood nearby, where many residents send their kids to Jewish sleepover camps in the summer that have (like the one I used to attend) a Zionist history or bent. I was browsing the centre aisle in the store—packed with wooly socks, Crocs, etc.—when I came across a table piled high with T-shirts and I saw, sitting neatly right beside stacks of Batman and Superman shirts, a pile of forest-green tees bearing the bright yellow logo of the Israel Defense Forces. I don’t know if the arrangement was intentional, but its message was clear: What’s the difference between Clark Kent, Bruce Wayne and the IDF? Nothing. This was not my first brush with IDF “fashion”; the T-shirts are actually a staple in many diaspora Jewish kids’ closets. When I was in the ninth grade in the early 2000s, and Israel and Lebanon were in the midst of a gruesome war, I arrived at school one morning to see my best friend wearing a child-sized T-shirt with the IDF logo on it, short enough to reveal her midriff and belly-button piercing. “You probably shouldn’t be wearing that when there’s a war going on,” I said. “Whatever,” she responded. “It’s a cute T-shirt.”

It was a cute T-shirt. But militaries are not fashion fodder, nor are they the stuff of superhero movies. They are necessary evils. I am pro-Zionist, but this kind of Zionist triumphalism on the part of some diaspora Jews, and general ambivalence to suffering overseas, has long troubled me. When I saw the IDF-superhero arrangement in the camping store, I contemplated tweeting a photo of the display, with an irreverent, disapproving caption (#Jewishdiasporafail, maybe.) I took a picture of the T-shirts and was about to hit “share” when a nagging voice entered my head: “Are you sure you want to do this?” it asked. “You may not like what you see.”

This is the voice I suspect many Jews hear when they feel conflicted about the way in which their people or state behaves and would like to say so publicly, but also suspect that their criticism will backfire and provoke not change or understanding, but anti-Semitism. And, generally, I hate to admit it, the voice is right. I didn’t tweet the photo.

Since the violence began in Israel and Gaza this month, my Facebook page has been littered with both pro- and anti-Israel sentiments. The loudest voices are undoubtedly the ugliest: militant Zionists removed from the reality of Palestinian suffering who wear IDF T-shirts as if they are Toronto Maple Leafs jerseys. And militant Palestinians who decry the civilian death toll in Gaza but refuse to denounce Hamas’s rocket attacks, which, were it not for Israel’s Iron Dome technology—let’s face it, something out of a Harry Potter movie—would kill countless civilians.

This past Saturday, I saw the hashtag #HitlerWasRight begin to trend on Twitter. Some notable contributions: “HitlerWasRight Jews ARE scum”; “Hitler was such a good man to kill the Jews #Hitlerdidnothingwrong”; “This is not a war, this is genocide #FreeGaza #HitlerWasRight.” I also saw some of my most progressive friends and acquaintances—the kind of people who use “check your privilege” regularly in casual conversation—tweet and post inspirational quotes and petitions from activist forums whose discussion groups include comments about “greedy, manipulative Zionists” and “Zionist Nazis.” In Paris recently, pro-Hamas rioters stormed two synagogues after a pro-Palestinian rally. Think about that for a second: Their target was not the Israeli embassy; it was not the American embassy; it was a forum where Jews happened to be worshipping. (And people wonder why so many Jews conflate anti-Israel sentiment with bigotry).

Jews may hesitate to speak openly and critically about Israeli policy, not because of pressure from lobby groups and stern-faced, Holocaust-survivor grandparents, but because of anti-Semitism. I am not some tin-foil-hat Zionist who sees prejudice everywhere she looks. Nor do I believe that all criticism of Israel is anti-Semitic, or “delegitimizing”—a term used so frequently by university-campus Zionists, it has become meaningless. But, since the violence began this month, I have tried, in good conscience, to find pro-Palestinian voices and groups who do not ignore anti-Semitism when it rears its head around them, and I have failed. It says a great deal about the mainstream, anti-Israel movement known as BDS (Boycott, Divestment and Sanctions) that one of its highest-profile left-wing Jews, American academic Norman Finkelstein, defected because organizers refused to acknowledge that Israel has a right to exist. (If you’re too radical for Norman Finkelstein, you’ve got a problem.)

The only way progressive Jews like me will begin to speak critically about Israel beyond our Friday-night dinner tables is if we can count on non-Jews to back us up when someone links Zionism to Nazism, or starts talking ever so casually about “those greedy capitalist puppet masters.” Point me toward an activist group as equally committed to dispelling anti-Semitism as it is to the rights of Palestinians and I’m on board. So far, however, all I have seen is thinly veiled prejudice, and otherwise progressive liberals ignoring it.