Image of the week: APEC leaders gathered in Papua New Guinea against the backdrop of a U.S.-China trade war. It did not go well. 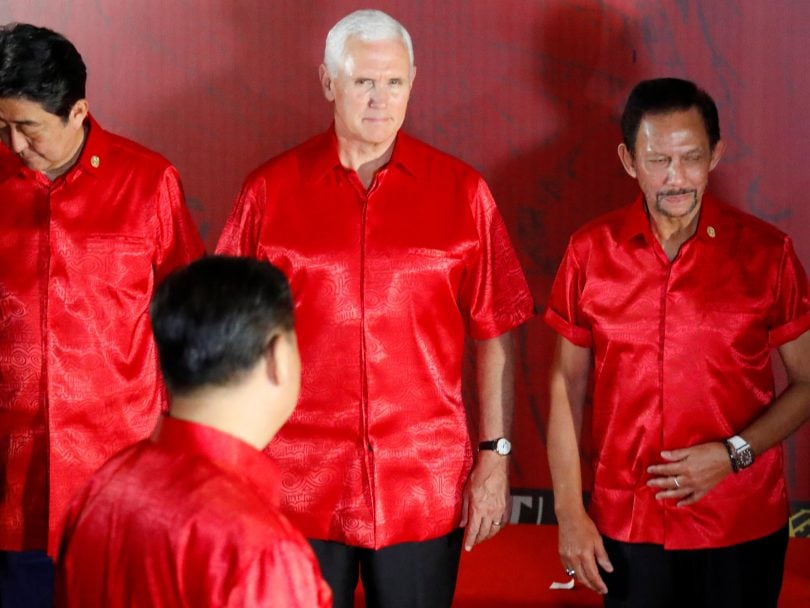 Pence staring at Xi, whose back is to the camera, as they prepare for the traditional 'family photo' with other APEC leaders in Port Moresby, Papua New Guinea (David Gray/Reuters)

In 1989, countries on both sides of the Pacific formed the Asia-Pacific Economic Cooperation (APEC) with a relatively straightforward goal: increase communication across the ocean, paving the way for smoother trade. Cooperation is literally in the name. So when U.S. Vice-President Mike Pence and Chinese President Xi Jinping clashed—loudly and publicly—at this year’s summit in Papua New Guinea, it raised alarms. In his speech, Pence blamed China’s intellectual-property theft, unfair tariffs and industrial subsidies for a $375-billion trade deficit with the U.S., and depicted Xi as a global huckster luring nations into their cross-continental infrastructure plan, dubbed “One Belt, One Road,” only to leave them saddled with debt. Xi seemed a dubious spokesperson for meeting challenges “in a responsible, rules-based way,” as he put it, given that he recently changed China’s laws to basically allow him to become president for life. But he struck a more optimistic tone than Pence, encouraging cooperation, openness and free trade. Chinese officials later denied Pence’s claims outright. While the two global figures don’t see eye-to-eye, their eyes certainly met, at least, as captured in this photo of Pence staring down the Chinese leader, Spaghetti Western-style.