Why Netanyahu’s revisionist Holocaust history helps no one

The Israeli prime minister's recent lie about the roots of the tragedy will have dangerous, far-reaching implications

On Nov. 28, 1941, Amin al-Husseini, the grand mufti of Jerusalem, sat down in Berlin for a meeting with Adolf Hitler. Their conversation, as described by University of Edinburgh historian David Motadel, who has written a book on Islam and the Nazis, was an “exchange of empty courtesies.”

According to the official German report of the meeting, Husseini told Hitler the Arabs and Germans shared the same enemies, namely the English, the Jews and Communists. He said the Arabs stood ready to help Hitler through acts of sabotage and the formation of an Arab legion. Husseini asked Hitler to make a public declaration that Germany supported Arab independence, as well as the elimination of the Jewish national home (in Palestine).

Hitler replied that he was committed to the destruction of the “Judeo-Communist empire” in Europe and would in due course bring that struggle to the Middle East, when he would tell the Arab world their hour of liberation had arrived. But he said he could not yet publicly declare support for Arab independence because doing so might intensify anti-German resistance among French opposed to the breakup of their Middle Eastern colonies.

The meeting ended. Husseini remained in Germany but never spoke with Hitler again. He requested a second meeting in 1943 and was rebuffed.

The mufti was a toadying anti-Semite, one of thousands who collaborated with the Nazis during the Second World War. His direct role in the Holocaust, which was already well under way when he met with Hitler, was minor—limited, says Motadel, to his efforts to block the emigration of Jews from Nazi Germany’s southeastern satellite states to Palestine.

This isn’t the way Israeli Prime Minister Benjamin Netanyahu sees it. Last month, he portrayed Husseini as the Holocaust’s architect, the man who convinced Hitler to “burn” the Jews. “Hitler didn’t want to exterminate the Jews at the time; he wanted to expel the Jews,” Netanyahu said in a speech to the 37th Zionist Congress. “If you expel them, they’ll all come here,” he says Husseini told Hitler at their meeting in Berlin.

“So what should I do with them?” Hitler supposedly asked.

“Burn them,” Husseini replied, according to Netanyahu.

“Such a conversation never took place. It is invented,” Motadel said in an email interview with Maclean’s. Michael Marrus, a professor emeritus of Holocaust studies at the University of Toronto, said Netanyahu’s comments were “grossly inaccurate.” Christopher Browning, a professor emeritus of history at the University of North Carolina at Chapel Hill, described them as “total fabrication . . . an outright lie.”

Netanyahu’s speech was all those things. Politicians distort all the time. But this was something different: the prime minister of a country that rose from the Holocaust’s ashes telling falsehoods about that tragedy for political ends. By doing so he has risked discrediting the government he leads, and eroding acceptance of the Holocaust’s established narrative. It’s an act that could reverberate beyond Israel to Europe, where the death camps and killing pits were located. 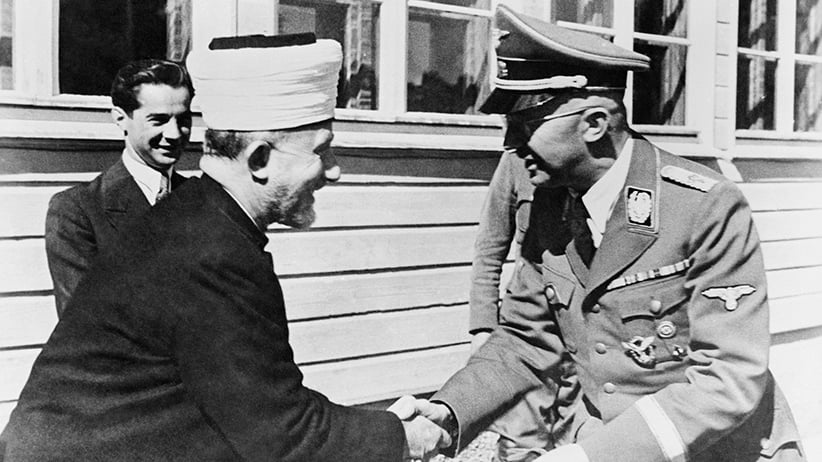 A visitor to Israel’s Yad Vashem Holocaust museum emerges from the exhibits and from the shadows that permeate much of the museum’s interior to a light-filled balcony that looks out over Jerusalem. The architecture is symbolic. Jews have lived in what is now Israel for thousands of years. The Holocaust, nevertheless, is central to many Israelis’ sense of national identity.

“There is a sense that the Holocaust is one important justification for why we need a Jewish state, so that we can defend ourselves. Never again should we be victims,” says Meir Litvak, a professor of Middle Eastern history at Tel Aviv University. The Holocaust’s resonance in the Israeli psyche makes it a powerful rhetorical tool for politicians. Many have used it.

Abba Eban, when foreign minister after Israel’s victorious 1967 Six Day War, said Israel’s borders prior to the conflict reminded Jews of Auschwitz, a Nazi death camp. Netanyahu himself, more than once, used the Holocaust as a comparison point for the threat he believes Iran poses to Israel.

“I think Netanyahu’s world view is that Israel and the Jews are facing a continuous, unbroken threat to their existence. Basically, we are facing a new Hitler every generation. It was the Nazis, then the mufti, [former Egyptian president Gamal] Abdel Nasser, the Iranians, the Palestinians, etc.,” says Litvak.

Netanyahu’s most recent evocation of the Holocaust—made as Israel is gripped by a wave of stabbing attacks against Jews by Palestinians—may have been motivated by a desire to demonize the Palestinians by demonstrating that they wanted to kill Jews before the creation of the modern state of Israel, and Israel’s occupation of the West Bank and Gaza Strip in 1967. “Basically, the Palestinians and the Nazis are one and the same, and it’s all part of a long continuum,” says Browning, referring to the argument he says Netanyahu is making.

According to Litvak, Israelis are still traumatized by the Holocaust. “And I’m not saying it’s never used as a political weapon. It’s used everywhere. The question is how much do you distort?” he says.

Distortions and lies about the Holocaust are rife in Arab and Muslim countries. Former Iranian president Mahmoud Ahmadinejad famously described the murder of some six million Jews a “myth” and a “lie.” “There’s no education about the Holocaust, really, in the Arab world,” says Mehnaz Afridi, an assistant professor of religious studies at Manhattan College in New York.

Even where ignorance about the Holocaust is deeply rooted, falsehoods and denials about it also often serve political purposes. “Because if the world supported the Jews because of the Holocaust, and if you can prove there was no Holocaust, then Israel will lose its support,” says Litvak, co-author with Esther Webman of From Empathy to Denial: Arab Responses to the Holocaust.

Lies about the Holocaust might be expected from Israel’s worst enemies. But Holocaust falsehoods from Israel’s prime minister have their own damaging repercussions. “If Netanyahu is caught in a serious distortion, then his credibility as a leader, as a spokesman for Israel, is shaken seriously,” says Litvak. “I can imagine now anti-Semites and Holocaust deniers in the West who will take the first half of Netanyahu’s sentence—‘Hitler did not want to exterminate the Jews’—and they will use it. He undermined the credibility of any Israeli leader.”

More than a week after making his initial remarks, Netanyahu said he wished to “clarify” them, and said it was the Nazis who decided to embark on a campaign to exterminate Europe’s Jews. But the damage might not be easily reversible. Netanyahu gave an air of credibility to “fringe discourses” that conflate and link Islam and Nazism, says Stefan Ihrig, a historian at the Van Leer Jerusalem Institute.

Browning, who has testified as an expert witness at two Holocaust-denial trials, fears what might happen if he is called to do so again.“I know exactly what’s going to be thrown in my face,” he says. “ ‘Why can’t my [client] do it if the prime minister of Israel does it? Why is my guy being charged, and [Netanyahu] is elected prime minister of Israel?’ For someone who’s supposed to have the interests of the state of Israel at heart, this is extraordinarily self-destructive.”

There are potential repercussions beyond Israel as well. “Part and parcel of Holocaust denial is this motivation to deflect guilt away from Germany, and this is where Netanyahu has found strange partners in his rhetoric,” says Ihrig.

German Chancellor Angela Merkel quickly and unequivocally reiterated Germany’s responsibility for the Holocaust following Netanyahu’s comments. But Europeans have not always readily acknowledged their historic role in the Holocaust. When they do, it can shape debates about current events—including the influx of refugees, many of whom are Arabs, into Europe.

“The Holocaust has become an event that allows Europeans to be critical of the present by considering the past. If the blame for the Holocaust can be directed away from Europeans toward others, then that capacity for self-criticism could weaken,” writes Timothy Snyder, author of Black Earth: The Holocaust as History and Warning, in a recent essay for CNN.

In the introduction to Black Earth, Snyder says the history of the Holocaust is not over. “Its precedent is eternal, and its lessons have not yet been learned,” he writes.

What those lessons are is open to debate—by historians, politicians and others. New ones will undoubtedly emerge with the passage of time. All of them depend on historical truth. All of us, but perhaps especially the prime minister of Israel, have an obligation to protect that.