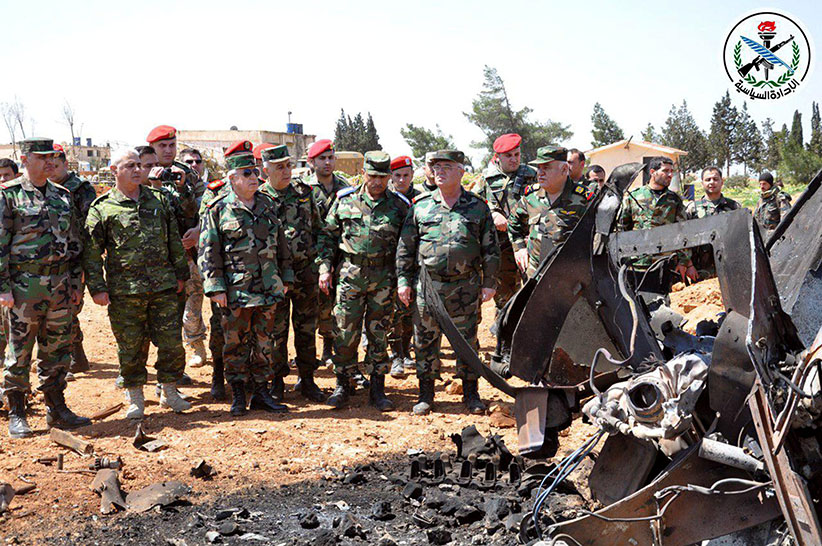 epa05895692 A handout photo made available by Syrian Arab news agency SANA shows Syrian Chief of the General Staff of the Army and Armed Forces Gen. Ali Abdullah Ayoub (3-L) inspecting the damage in al-Shairat Air Base in the southeastern countryside of Homs province,Syria 07 April 2017. The United States military launched 59 cruise missiles at a Syrian military airfield in retaliation for a chemical attack which killed scores of civilians. (SANA HANDOUT)

A game-changer, it is not. Not yet.

U.S. warships have sent a clear message to Bashar al-Assad in the aftermath of the Syrian regime’s heinous toxic gas attack on the rebel-held town of Khan Sheikhun, near Idlib in northern Syria. Assad’s attack early last week has killed at least 70 and injured hundreds more. On Thursday night, President Donald Trump announced a military strike, couching it in terms of defending U.S. strategic interests in the region and upholding international law conventions banning the use of chemical weapons, while informing the Russians—whose soldiers and “consultants” are spread out throughout the Syrian territory—through a back channel of the coming attack. And while the American attack was a limited action specifically related to the logistics of the chemical attack itself, it could have been—and should have been—part of a  wider strategy destined to weaken the regime’s ability to wage war.

For Trump, the attack on the Syrian air field near Hama was especially symbolic. It was from the Shayrat air base that the most recent gas attacks against Idlib were launched last week. One will recall too that, in 2013, former president Obama played with the idea of a military strike after having drawn his red line in the sand only to have Bashar promptly cross it and use chemical weapons on his own people elsewhere in the country. In 2013, the same Shayrat air base was among the potential targets if Obama had decided in favour of a military strike. Trump clearly wanted to strike quickly, and the Shayrat option was already at the top of the Pentagon’s list.

For Trump, the Syrian air strike is the result of a perfect storm or, as Turkey’s President Erdogan said of his own victory after a failed coup d’état last year, “a gift from God.” It could not have come at a better time for Trump.

Since the beginning of his presidency, there has been much to criticize: failure to repeal Obamacare, disorder in communications worsened by the President’s almost obsessive need to use Twitter, Michael Flynn’s 28-day career as a White House national security advisor, the court challenges to two temporary refugee bans, the scandal over Russian interference in the last U.S. presidential election, and countless others. It has been a comedy of errors. Before the Syrian strike, the President’s popularity with the American people set record lows.

Yet, with one swift and unexpected blow, the domestic critics have been silenced. Something has actually worked this time—a presidential order executed cleanly, a logistical first for Trump’s administration—and the unpredictable Trump has succeeded where ex-president Obama failed in taking firm action to stop the use of chemical weapons against the Syrian people. In addition to strong public support, there is bipartisan approval amongst the American political class. The traditional Republican Party, which holds a majority in Congress, are hawks on Russia and Syria, and politicians like John McCain and Marco Rubio have been clamouring for a harder line. As such, the Syrian attack offers cover to Trump’s presidency from allegations of collusion and cupidity regarding Russian tampering in the last presidential election.

On the international scene, Trump’s decision has succeeded in currying the favour of America’s Western allies, while injecting cautious optimism into the Syrian opposition and sending several messages to the international community, Assad, and his Russian and Iranian allies. Unlike former president Obama, the U.S. policy of “leading from behind” is not without exceptions. That policy may even be under serious reconsideration especially given the popularity gains it has won for Trump and his team. The Obama policy was never very popular with the Pentagon anyway. The temptation may be to go back to the well next time Trump’s unpopularity hits new highs.

Not all the reaction is positive though. After having leaked news that Russia’s support of its Syrian ally is not unconditional, the Russians, like the Iranians, have criticized the strike. The Syrian government, meanwhile, has vowed to be more vigilant in the use of its anti-missile batteries, but this could be a non-starter given Israel’s threats if an Israeli plane is attacked, as one was in April, by Russian forces. President Netanyahu’s February visit to Moscow provided him an opportunity to remind Russia to ensure the safety of ongoing Israeli overflights while delivering a warning about any stepped-up Iranian and Hezbollah activity in Syria and near the Israeli border.

Only time will tell whether this attack on Assad’s forces will be the first of many. In terms of the Syrian conflict itself, it has not changed the military situation on the ground. Since their defeat in Aleppo late last year, the rebels have been backed up in the Idlib corner of Syria and in a few other pockets around the country. Fighting continues throughout Syria though, and rebel commanders confirm that the embargo on delivery of U.S. supplies and materials has been partially lifted.

But while friends and supporters of the Syrian moderate democratic opposition hope that this first American strike will be followed up with a series of planned attacks accompanied by a cogent strategy to oust Bashar al-Assad from power, there continues to be no Syria policy—much less any independent course of action—from Canada. This morass is simply another side of the very disappointing performance of Justin Trudeau’s Liberal government in foreign policy generally, the likes of which resemble the visionless Harper era. Despite Syrian experts and observers raising their voices, and despite taking an energetic defence of Syrian dissidents early on, Canada continues to drag its feet as if the hypocritical inaction of the past six years constitutes some sort of real policy. Depending on the civil service at Global Affairs to mull through and manage world conflicts and avoid having the Trudeau Liberals take any decisions that may impute responsibility is the opposite of principled and strategic leadership. It will surely not be enough for Canada to win a seat on the Security Council and be a trusted actor on the world stage.

Most political observers would agree that America’s election of Donald Trump as president adds uncertainty into conflicts like Syria. And the regime’s barrel bombs will continue, unfortunately. But Trump took the action that gave him the best chance to stop the toxic gas attacks that Assad has been inflicting on his own people. Make no mistake, the hands of the Russians and Iranians are covered in the blood of innocent Syrian civilians, but thanks to Trump, the world may see an end to at least one particularly horrific form of barbarism, and some civilian lives may be saved. No matter where our political allegiances may be, this is a good measure. In the meantime, friends of the Syrian opposition and people within Syria are hoping for more strikes against the Syrian regime and their Russian and Iranian backers. But after six years of preaching in the desert, I do not have much hope. Trump’s attacks ultimately look too much like a drop in the bucket: Not enough. Not even the minimum.

After all, the world would be a better place without Bashar al-Assad.