The real scandal in hockey

Ken Campbell on the problem with Canada's obsession 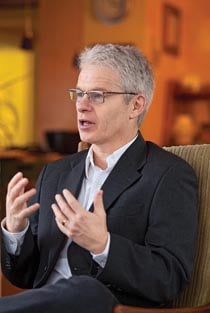 With $320,000, you could buy a home in a medium-sized Canadian city, or an education at an Ivy League university. Or, you could do as a growing number of parents do: spend it on personal trainers, road trips, sport psychologists and league fees in the faint hope your child will attain fame and fortune in hockey. Ken Campbell, a senior writer at the The Hockey News, and co-author Jim Parcels explore this phenomenon in Selling the Dream, a book about how hockey parents, kids and the game itself are paying a steep price for Canada’s national obsession.

Q: I was struck, as many hockey fans were, by an ad Nike ran just before Christmas, which played on a familiar and romantic notion linking pro hockey to scenes of frozen lakes and small-town arenas. How far does that imagery stand from today’s reality, as witnessed by a kid dreaming of an NHL career?

A: The dream is still pure for most people; hockey is and always will be an enormous part of the Canadian cultural fabric. But I want people, when they read this book, to realize that it’s time to dial things down a bit. Hockey has become almost too important in Canada; in a lot of ways, it’s all we have. We have athletes who excel in other sports, but the stakes in hockey have gotten so high that it seems all-pervading. People get caught up in the dream very quickly, and very easily.

Q: That sounds a bit odd, coming from a Hockey News man.

A: I was able to write this book because I’m a Hockey News guy. I was going to NHL drafts and world junior championships and seeing all these young players whose families were doing everything from quitting their jobs and moving to another city, to hiring personal trainers. I defy you to find one player in the NHL under 25 who hasn’t had extensive one-on-one training and highly advanced dry-land training; who hasn’t played a lot of summer and spring hockey; who hasn’t been part of an elite program that’s cost tens of thousands of dollars. The financial and lifestyle sacrifices that families are making is enormous and, my goodness, it’s such an industry. The business of selling the dream is very, very good right now.

Q: Surely, the dream has always been for sale to some degree, though.

A: Yes, but it wasn’t happening when kids were 10 and 11 years old. Nowadays, you’ve got the Brick Tournament in Edmonton to showcase nine-year-old kids. What are nine-year-old kids showcasing themselves for? You’ve got agents representing kids who are 14 years old. An NHL career doesn’t just happen anymore. It’s built, it’s planned and, in a lot of ways, it’s paid for.

Q: The most shocking fact in your book might be that the $10,000 or $20,000 a year parents believe they’re “investing” in an NHL contract or NCAA scholarship for their kid would quite literally be better spent on the lottery.

A: I’ve had people ask me, ‘What do I have to do to get my kid a hockey scholarship?’ My answer would be, ‘Take all the money you’re putting into minor hockey and put it in a GIC. By the time your kid is ready to go to college, you’re going to have more than enough to pay for it.’ People seem to think schools are throwing scholarships around like candy. In fact, there are only about 50 schools in the U.S. offering Division I NCAA scholarships, and most of those are going to American kids. Hardly any schools offer full-ride scholarships any more.

Q: The most striking story is that of a family from near Pittsburgh who lived on their sailboat off Port Credit, Ont., just so their son could play in the Greater Toronto Hockey League, because it’s considered one of the country’s premier minor hockey circuits. What became of them?

A: The kid played three seasons and actually did reasonably well. He went to play junior in the USHL and last year was the backup goalie at Mercyhurst College in Erie, Pa. But the chances of him doing anything in hockey beyond the college level are pretty remote. And the parents, who both quit their jobs and came to live with him in Toronto, have since split up. I don’t know whether this experience had anything to do with it, but they’re back in the U.S. trying to rebuild their lives.

Q: Living together in the same 150 sq. feet for three years can’t have helped.

A: That, and having to empty the waste bucket, break the ice around the boat, and take their showers up in the marina. Look, I admire their dedication.

Q: Very few families are willing to admit they may have made a mistake. Why is that?

A: I think there’s a certain amount of delusion. The way a lot of people view it is: ‘Well, we chased the dream and he didn’t get the riches at the end of the rainbow, but that’s fine. He had a great minor hockey experience and that’s all we could hope for.’ I don’t know. You don’t do all this unless there’s an endgame, do you? I talk to parents who say things like: ‘It’s his dream and who am I to take that away?’ My goodness, if you don’t spend $20,000 a year, you’re taking his dream away from him? Is there no middle ground here?

Q: The big lie appears to be the idea that enormous effort and grooming are more important than talent. How’d that idea gain traction?

A: I don’t know where it originated, but a lot of the parents I talked to mentioned the 10,000-hour rule espoused by Malcolm Gladwell in his book Outliers. It was an extension of the theory of a Swedish psychologist, Anders Ericsson, who basically studied a bunch of musicians and found that if you put in 10,000 hours of dedicated practice over 10 years, you will become an expert. But the theory almost completely dismissed natural talent, and it can lead a hockey player to believe that all you have to do is work hard, that the fact you’re five foot five and 125 lb. won’t make a difference. Or the fact your family doesn’t have the resources to have you on the ice two hours a day, playing against the best players in the best league, doesn’t matter. Well, I’ve got people in the book who say that’s a lot of rubbish.

Q: But if everyone else, irrespective of talent, has personal trainers, sports shrinks and access to spring leagues, what happens to talented players who don’t have those things?

A: They’ll be a shrinking minority. I talked to players like Glen Metropolit, who grew up in Regent Park, which is an assisted-housing development in Toronto and one of the poorest demographics you’re going to find in the country. He didn’t have any of that, and he ended up playing 400 games in the NHL. But I fear that sort of player is going to become extinct. I mean, you’ve got hockey academies popping up all over the country, where parents are paying $20,000 or $25,000 a year so their kid can go to a school tailored around their sports pursuits, playing two hours a day, surrounded by like-minded people and the best competition. I worry that sort of atmosphere will become necessary for anyone who wants to succeed in hockey.

Q: You conclude that the very future of the game is at stake. How so?

A: The kids that are playing hockey now are the fans of the future. But if, by the age of 10 years old, the doors have been closed because you don’t have the resources or you’re too far behind, are you going to keep playing? Maybe you’re not going to be a fan as an adult, and maybe you won’t want to play at 10 o’clock on a Saturday night. Look, Canada is always going to produce elite players—enough to stock the NHL. Hockey players now are better coached, better conditioned, they are more ready to play in the NHL than they’ve ever been. But the [enrolment] numbers speak for themselves. They’re dwindling and, with birthrates much lower, I know Hockey Canada is very concerned.

Q: What effect, emotionally, socially, is it having on the kids?

A: I think it’s created players who are more consumed by their own development than they are with, say, representing their town or playing with their friends. And I worry about the extra layer of pressure on kids for whom hockey is now a 12-month-a-year pursuit, instead of a six- or seven-month pursuit. How well-rounded are they as people? It turns childhood into work. I had lots of parents tell me this is what their kid wants to be doing, that this is his passion. My answer to that is, who is driving the bus here? As parents, isn’t it up to us to dial that down, expose them to other things and provide some perspective?

Q: You propose some fixes: no elite hockey before peewee; ensuring kids are exposed to other sports. But how do you stop people from lavishing money on their kids as they see fit?

A: You can’t. And I don’t know that there’s a panacea for this, other than people getting some perspective and maybe wondering whether it’s really good for their nine-year-old to be playing 70 games a year, travelling to tournaments in Pittsburgh. There has been a professionalization of play in our culture in North America, and it seems like a runaway freight train. Hopefully, this book will cause some people to consider where they’re going. But I fear that the people who most need to read it will probably ignore it.