Your essential reads on Aboriginal issues 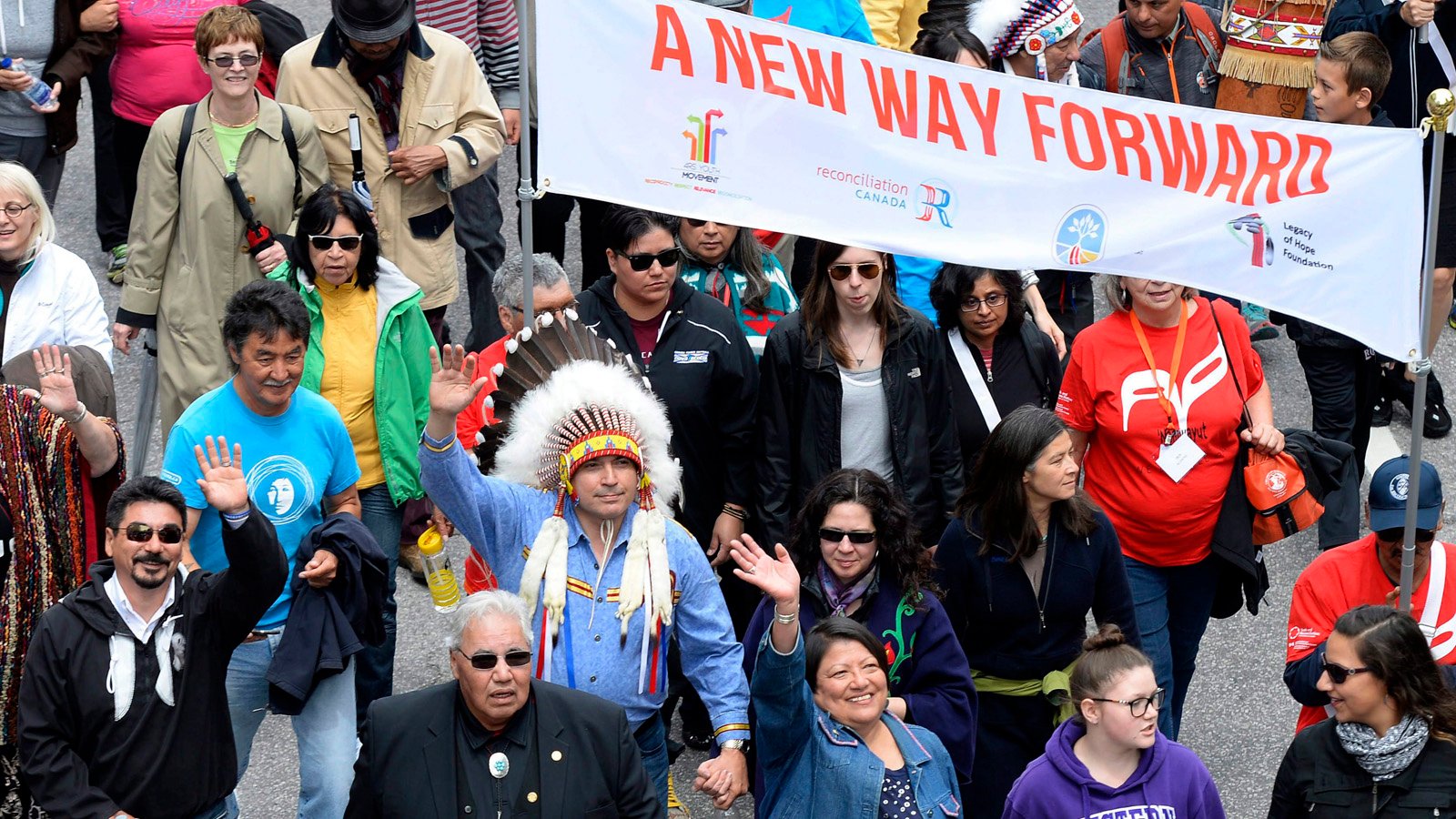 Assembly of First Nations Chief Perry Bellegarde (in headdress) and Justice Murray Sinclair (in black suit), TRC commissioner, march during the Walk for Reconciliation, part of the closing events of the Truth and Reconciliation Commission on Sunday, May 31, 2015 in Gatineau, Que. (Justin Tang/CP)

Indigenous people in Canada have election priorities, and at a press conference on Wednesday, Assembly of First Nations National Chief Perry Bellegarde will tell federal party leaders how he thinks they should close the quality-of-life gap between Canada’s Indigenous population and the rest of the country. Here are some Maclean’s essential reads on the issues that matter, ahead of that announcement.

Bellegarde on closing the gap

Bellegarde spoke to Maclean’s about where he sees opportunity to gain ground before the fall election, his discussions with all of the federal and provincial leaders during the past three months, and the shame around the disparity of wealth in the country and how to close the gap.

“If people in Canada can’t get their heads around treaty rights or inherent rights or Aboriginal rights, then just get your head around the business case,” he told us. “There’s a high social cost of that exists. So let’s put our minds and heads and hearts together to develop strategies and policies and legislation to help close the gap.”

Like many First Nations schools across Canada, reading wasn’t taught very successfully in the Ojibwa community of Kettle and Stony Point First Nation on the shores of Lake Huron. Teachers tended to attribute their pupils’ struggles to the nature of the community of about 2,000, which suffers from its share of the economic and social problems all too common on reserves. If kids failed, teachers “got into the excuse game,” says principal Cathy Hampshire. “Oh, well, they can’t do this. Let’s make them feel good, let’s make them feel safe at school.”

All that started to change in 2010, when the Martin Aboriginal Education Initiative, founded by former Liberal prime minister Paul Martin, brought a model school project to Hillside, and also to Walpole Island Elementary School, in another Ojibwa community about a two-hour drive from Kettle Point. The project’s aim was to overhaul the way reading and writing was taught to students like Dayna. Four years later, the test results they achieved were nothing short of inspiring.

‘It could have been me.’
Thirteen remarkable women share their stories, giving raw insight into what it means to be an Indigenous woman.

An accountant, a chief, a nurse, a student, a counsellor—each of them came close to being on Canada’s list of missing and murdered Indigenous women. Thirteen women tell their extraordinary stories of terrible violence and formidable resilience—stories that, as one survivor hopes, will serve as ‘a pay-it-forward of women sharing their pain and triumph.’

A few days after the Truth and Reconciliation closing ceremonies in Ottawa, I boarded the Little Bear, that iconic train running between Cochrane and Moosonee. The plan was to decompress with my friend, the Cree legend William Tozer, at his remote camp about 210 km north of Cochrane. I don’t use that word—decompress—lightly. I’d arrived in Ottawa the Sunday before to take part in the march (10,000 strong) that kicked off the highly anticipated final Truth and Reconciliation Commission gathering, the climax of which was to be the commission’s announcement of findings and especially its recommendations.

That morning on the Little Bear I was still reeling from the psychological weight of being witness to the torrents of pain that a Truth and Reconciliation Commission gathering unleashes. But I was also stunned by the beauty of days of witnessing survivors surrounded by younger generations there to support them, with spontaneous drumming and singing of traditional songs in the original languages, as if to remind those survivors that the system that had brutalized them had ultimately failed in its original mandate to remove the Indian from the child in order to save the man. To experience something historical as it unfolds before your eyes turns out to be pretty exhausting emotionally, psychologically, and even physically.

Election issues 2015: A Maclean’s primer on truth and reconciliation

When the Truth and Reconciliation Commission (TRC) released its landmark report into the tragic history of residential schools on June 2, the resulting flurry of news coverage made it seem as if Aboriginal, Inuit and Metis issues might really matter in the coming election. Well, maybe. Indigenous Canadians remember all too well how the 1996 five-volume, 4,000-page Royal Commission on Aboriginal Peoples in 1996 failed to push their issues to the top of the political agenda. Could the 2015 campaign be different?

For the record: Political leaders on residential schools
Bernard Valcourt, Thomas Mulcair, Justin Trudeau, Elizabeth May and Perry Bellegarde react to the Truth and Reconciliation report.