Anne Kingston: It's too often done with the assumption that her fiancé represents a racial norm. And that carries some ugly historical resonance 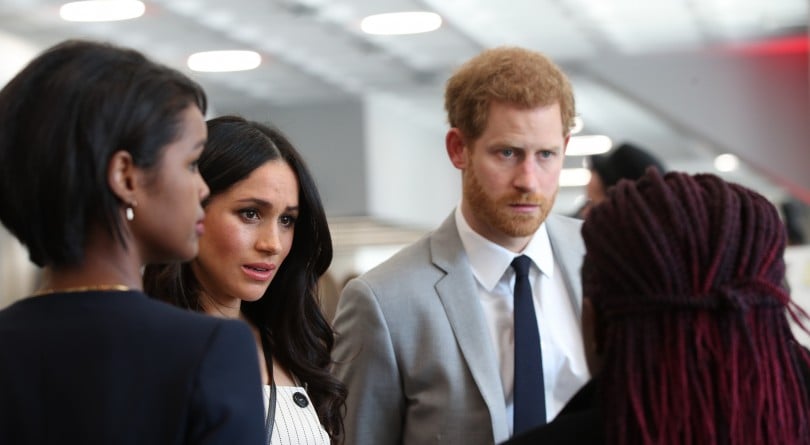 If one adjective has been exhausted when describing Meghan Markle, it’s “biracial,” a word that in itself tells you nothing, only that the future princess is the product of two races, not one. In Markle’s case, it’s accepted shorthand for her having an African-American mother and a Caucasian father, which, as she has herself written, has shaped her character and her outlook. Yet the casual, now almost reflexive use of “biracial” when describing Markle also exposes unconscious bias about “racial purity” still hardwired into the culture, the legacy of anti-miscegenation laws that outlawed “race mingling” in segregated America. It’s a double standard laid bare by the fact there are no similar qualifiers used to describe the racial heritage of Prince Harry, whatever the heck that might be. He’s not routinely ID’ed as “Caucasian” or “white” or the product of generations of Teutonic inbreeding. And that’s because he’s perceived to be “uni-racial,” the mythic racial purity default.

The very notion of “uni-racial” is preposterous, of course, as revealed by DNA testing that illuminates how jagged and complicated racial heritage can be. There’s no DNA category for “race” because there’s no genetic marker for it. As mounting science makes clear, race is a social, not a genetic construct—and racial classifications as we understand them are weak and should be abandoned. As Angela Onwuachi-Willig writes in the New York Times: “There is no gene or cluster of genes common to all blacks or all whites” If race was “real” in the genetic sense, she notes, racial classifications would remain constant across boundaries. They don’t: “a person who could be categorized as black in the United States might be considered white in Brazil or coloured in South Africa.”

That’s not to deny race as a very real social fact, the basis of both community and discrimination. One need only look at the discussion of racial politics in the U.K.—as well as overt racism—unleashed by the Wedding of the Year. The spectre of someone “biracial” (code for “not white”) joining the Royal Family has shone harsh light on an institution still buttressed by archaic, and false, notions of pure bloodlines. In this tableaux, the Windsors (the “Saxe-Coburg-Gothas” until they ditched the surname in 1917) are upheld as one of the last mythical Whiteness Preserves, like an African lion safari run by Debrett’s Peerage. Markle’s arrival even revived chatter about whether or not “African” blood somehow entered the royal bloodstream via Queen Charlotte, the German princess who married “mad” King George III in 1761 (and gave birth to 15 children).

Within this discussion, Markle’s biracial status is often summoned positively, as proof of a new, more “inclusive” British Royal Family. But as Sadiya Ansari’s thoughtful exploration of the British monarchy’s racist history makes clear, the power to self-identify and define who does and does not count as white has always been a key source of white privilege. Ansari quotes a British sociology professor of Afro-Caribbean heritage referring to Markle as a “splash of coffee” in the Royal Family’s sea of whiteness: “Having a splash of coffee in the monarchy doesn’t make any bit of a difference,” Kehinde Andrews told Newsweek. “It doesn’t change what the monarchy is, it doesn’t change what it represents.”

In such a context, describing Markle as “biracial,” with the assumption that her fiancé represents the racial norm, harks to the legislated racial arithmetic arising from the “one-drop rule,” the social and legal principle of racial classification adopted in the U.S. South that brought us the odious term “mulatto.” Under this edict, anyone with even one ancestor of sub-Saharan-African ancestry (the “one drop” of black blood) was considered black, and thus inferior. An absurd labeling system ensued: one-quarter “black” heritage made you a “quadroon;” one-eighth black heritage an “octaroon;” and one-sixteenth, a “hexadecaroon.”

The one-drop rule was outlawed as unconstitutional in the landmark 1967 U.S Supreme Court case Loving v. Virginia. Still, its shadow looms, seen in profiling of Barack Obama, deemed by some as “too black,” by others as “not black enough.” A recent essay in Vox, “I study biracial identity in America. Here’s why Meghan Markle is a big deal,” pointed to a scene in the Netflix TV show Dear White People referencing the sub-labelling that still goes on: “You’re not Rashida Jones biracial,” one character says to another, “you’re Tracee Ellis Ross biracial—people think of you as black.” Such focus on skin tone has also seen Markle dragged into the contentious debate over “colourism,” prejudice and/or discrimination against people based on the shade, or darkness, of someone’s skin.

That people are still conditioned to see, and assign value to race, is also reflected in what’s known as “hypodescent,” the process whereby a biracial person is still categorized primarily in terms of the perceived lower-status race. This we’ve seen writ large in media treatment of  Markle—from The Daily Mail’s vile “(almost) straight outta Compton” headline to the New York Times’s putatively more inspiring “What Meghan Markle means to Black Britons.”

Against such a backdrop, the growing number of people of mixed racial heritage self-identifying as biracial or multiracial becomes an important, even radical, act of self-definition, as George Yancey and Richard Lewis, Jr. write in Interracial Families: Current Concepts and Controversies. Markle herself discussed the complexity of her mixed heritage in an eloquent 2015 essay published in Elle: “Being biracial paints a blurred line that is equal parts staggering and illuminating,” she wrote. She described the racism she and her family experienced, and the pride she took “in being a strong, confident mixed-race woman.” But her “biracial” status also thrust her into a fog, she wrote: “Just as black and white, when mixed, make grey, in many ways that’s what it did to my self-identity: it created a murky area of who I was, a haze around how people connected with me. I was grey. And who wants to be this indifferent colour, devoid of depth and stuck in the middle?” She hoped to find an identify beyond race: “You introduce yourself as who you are, not what colour your parents happen to be.”

It’s a sentiment that echoes Haille Selassie’s  1963 address to the United Nations in which then Emperor of Ethiopia said that Africa would not know peace “until the philosophy which holds one race superior and another inferior is finally and permanently discredited and abandoned; that until there are no longer first-class and second-class citizens of any nation; that until the colour of a man’s skin is of no more significance than the colour of his eyes.” (Selaisse’s own history, which included boasts that his lineage descended from King Solomon and the Queen of Sheba as well as charges of despotism, illustrates how difficult carrying out the directive can be.)  Martin Luther King Jr. echoed the sentiment the same year in his “I Have A Dream” speech: “I have a dream that my four little children will one day live in a nation where they will not be judged by the colour of their skin but by the content of their character,” he said.

More than 50 years later, we’re not there yet, as illustrated by reflexive descriptions of Markle as “biracial” in contexts when it is not relevant—or is as relevant as the fact that her eyes are brown. And whenever that happens, it reveals far more about entrenched notions of racial purity than it does about her.