An awkward end to Harry and Meghan's royal life

At the Commonwealth Day service, the tensions among royal family members were unmistakable 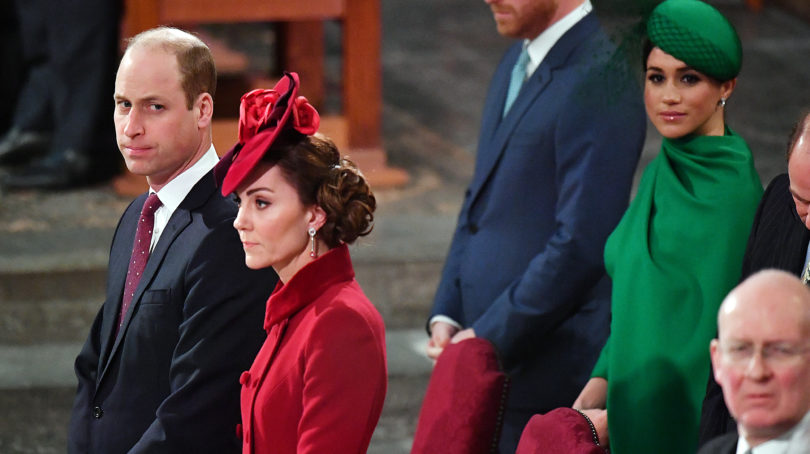 There are relaxed, fun family gatherings that members of the clan eagerly attend, seizing the opportunity to catch up with loved ones. Then there are events that most relatives dread, knowing that their differences will be on full display, the conversation stilted at best. Yet everyone RSVPs, knowing that to skip it would disappoint the organizer. Such is this year’s Commonwealth Day service at Westminster Abbey.

The annual hour-long event is a staple royal engagement for Queen Elizabeth II. “I declare before you all that my whole life, whether it be long or short, shall be devoted to your service,” said then-Princess Elizabeth to the Commonwealth on her 21st birthday in 1947.

This year, however, attention is less on the Queen than on two Windsors who are days away from doing what the Queen vowed never to do—give up their service to the Crown and the Commonwealth.

READ: Prince Harry and Meghan Markle vs. the royal family

Prince Harry and Meghan, Duchess of Sussex, returned to Britain from their temporary home on Vancouver Island to undertake a small flurry of engagements before they leave full-time royal life on March 31. The Commonwealth Day service is the only one with other members of Harry’s family, who have seen their lives thrown into turmoil because of the Sussexes’ decision. It is royal Kremlinology, played out on live television.

Any hopes for a loud quarrel in the middle of the medieval abbey were bound to be dashed. “I imagine everybody will be on absolutely best behaviour,” royal biographer Penny Junor told Reuters. “But goodness knows what they will all be thinking privately.” Indeed, the British royals are far more passive-aggressive in showing their displeasure.

The first sign that the ground had shifted under the Duke and Duchess of Sussex was a rejigging of the royal procession. As always, the Queen arrives last to Westminster Abbey, where senior members are waiting. They line themselves up in reverse order of succession (royals automatically know how to shuffle themselves into their spots) and walk together to the prime seats, where lesser royals are already waiting. Last year the senior royal procession included the Queen, Prince Charles and his wife, Camilla, Duchess of Cornwall, Prince William and his wife, Kate, Duchess of Cambridge, as well as Harry and Meghan and finally Prince Andrew (now retired from royal duty).

This year, the group has been hacked down to just the Queen, Charles and Camilla. Though an early version of the published order of service had William and Kate as part of the royal procession, that was changed at the last minute, perhaps to minimize just how far the Sussexes were dropping in the royal pecking order. In the end, William and Kate, Harry and Meghan, as well as Prince Edward and his wife, Sophie, all walked to their seats as soon as they arrived.

Once upon a time, the Sussexes and Cambridges were the Fab Four. By last year’s Commonwealth Service, their awkwardness was noticeable. Now, the frost between the couples is solidifying into ice. In Westminster Abbey, they appeared to carefully avoid all but the most basic interactions. Though Meghan and Harry arrived just before Kate and William, the Cambridges didn’t pause moving down the receiving line of clergy and dignitaries to greet each other, however briefly. And when William and Kate got to their front-row royal seats, that avoidance strategy continued. Aside from a very small wave from Kate to those royals already seated in the second row—Edward, Sophie, Harry and Meghan—the Cambridges appeared to be avoiding any interaction with Harry and Meghan. It was left to Prince Edward to keep up appearances by talking with the Sussexes.

Though everyone greeted the Queen, Charles and Camilla with curtsies, bows and broad smiles, the formality of the last official engagement of the Duke and Duchess of Sussex couldn’t hide the tensions. If anything, the service, with its mix of music and speeches, gave the royals a perfect reason not to talk to each other. “Wherever we live, our choices and actions affect the well-being of people and communities living far away, and in very different circumstances,” stated the Queen in her Commonwealth Day message, a sentiment that seemed to capture her family’s own strained relationship.

Harry and Meghan began the year expecting to get everything they wanted: to stay as high-profile royals able to focus on their own interests and charities without the tedious obligations inherent in their former senior royal roles, all while paying for their new lifestyle by throwing themselves and their royal reputations onto the commercial market. Their dream lasted five days. Then the Queen put her foot down. She loves her family but duty—to the Crown, the future of the monarchy and the Commonwealth—trump all. Elizabeth wanted Harry and Meghan to stay as full-time royals, but, as that wasn’t their wish, she then decided they would have to forsake all royal duties; there could be no half-in, half-out royals.

“Our hope was to continue serving the Queen, the Commonwealth and my military associations but without public funding,” Harry said at a charity dinner in January. “Unfortunately, that wasn’t possible.” Since then, the Duke and Duchess of Sussex have seen their once-expansive hopes for a post-royal life brought back to reality: they have had to give up their His/Her Royal Highness styles, can’t use the word “royal” in their non-profit, and will have to pay for the expensive renovation of their British base, Frogmore Cottage. At the same time, William and Kate, as well as Charles and Camilla, face a future of increased pressure and duty as they cope with the sudden departure of two top members of the royal family.

All those disputes were ignored for the 60 minutes of the Commonwealth Day service, which was carried live on the BBC. While it was a study in royal politeness, there was no attempt to send a signal that all is happy, good and forgiven in the House of Windsor. Even at the end of the service, when the family walked back to the Great West Door (again in order of line of succession to the throne), greeted performers lined up there and then got into their cars, it was royal diplomacy that seemed designed to prevent any interaction between the Cambridges and Sussexes, even though Harry and Meghan were immediately behind William and Kate.

While most everyone avoided handshakes, in part as a COVID-19 precaution—Charles used a namaste greeting—the two younger couples took it one step further, separating themselves from each other by a few clergy. So, by the time Harry and Meghan had finished talking with all those assembled, William and Kate had already finished their duties and left Westminster Abbey.

Only one of Harry and Meghan’s engagements this year has been recorded in the Court Circular, the official record of royal events. Reportedly, Harry decided he doesn’t want them included. Yet that royal boycott is moot when it comes to an event which the Queen attends. So, when details of the Commonwealth Day service are published, it’s likely that Harry and Meghan’s attendance will be noted. It may be their last inclusion for a long time.