Archie's christening was good news, but a self-inflicted jab for his parents

Harry and Meghan's insistence on a media-free christening, and their choice to not divulge Archie's godparents' names, seemed needlessly evasive 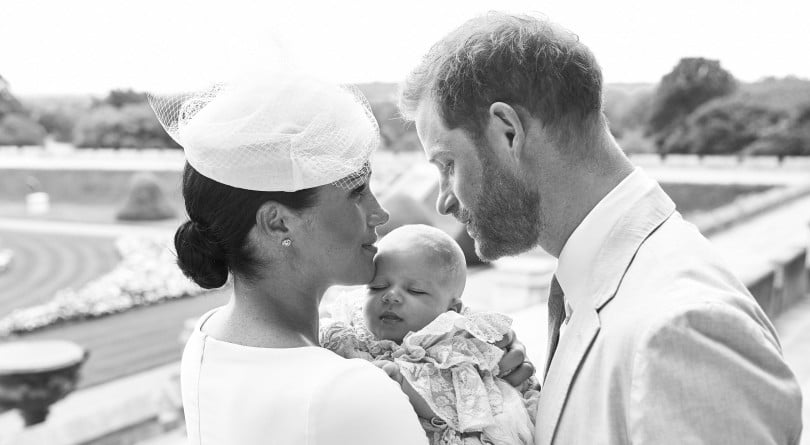 This official handout Christening photograph released by the Duke and Duchess of Sussex shows Britain's Prince Harry, Duke of Sussex (R), and his wife Meghan, Duchess of Sussex holding their baby son, Archie Harrison Mountbatten-Windsor at Windsor Castle with the Rose Garden in the background, west of London on July 6, 2019. (Chris Allerton/AFP/Getty Images)

If there are two royal events guaranteed to bring an avalanche of good press, it’s the birth of a baby and the christening a few months later. After all, everyone likes to look at a baby. So the weekend christening of Archie Harrison Mountbatten-Windsor at Windsor Castle should have been a slam dunk for Prince Harry and Meghan, Duchess of Sussex, as images of the royals at such family occasions fill up space amid the slow news of the summer, and would have allowed Archie’s parents to continue their parental leaves in peace.

But by tightening the normal rules that govern such moments, and in particular by refusing to allow media access and also not releasing the names of the godparents of the seventh in line to the throne, the Duke and Duchess of Sussex have transformed what should have been a positive, happy story into a multi-week saga with the media producing story after story, many critical, with no sign of abating. It comes as the high-profile couple is forging an identity and path that is uniquely their own, but one that raises questions and concern as to their methods.

Permitting the media to cover some aspects of an event such as a christening is a way to satisfy pent-up demand for images, especially in an age of 24/7 news and social media. But the Sussexes decided not only to have Archie’s christening in the private chapel of Windsor Castle, well away from public thoroughfares, but also to not allow even a small group of media to capture the arrivals and departures of family and guests (the service is always private). Now, all everyone has are two images handed out by the Sussexes: one of the three of them, another capturing the larger family unit, including the two sisters of Diana, Princess of Wales. “We have been shortchanged,” chided royal biographer Penny Junor in the Times. Even the dean of Chelmsford Cathedral, Nicholas Henshall, when asked about the royal christening, told the BBC, “Baptism should never be private—it’s a public demonstration of God’s love.”

News sites were instantly filled with the usual reports on how much Archie had grown and discussions as to whether his hair was red like his father’s. But with only two photos to examine, that innocuous news was overtaken by everyone, including fans on social media, spending way too much time analyzing the photos for clues, real or imagined, to the event and the social dynamics of the family. Why was Doria Ragland, Meghan’s mother, standing while Kate, Duchess of Cambridge, was sitting? Why were Diana’s two sisters there but not her brother? Did Kate’s body position indicate she was unhappy? Why, in the Sussex family photo, is Meghan looking at Harry, not Archie?

It’s the latest self-inflicted jab to the reputation of the Duke and Duchess of Sussex as fresh, modern, open royals and one that raises questions about the judgment of the royal couple and their new PR director, Sara Latham. The christening comes after some less-than-flattering coverage, including reports of a serious split between Harry and his brother, Prince William (they are splitting up their households as well as their joint charitable foundation). At the beginning of July, the Sussexes changed their Instagram feed to follow 15 environmental causes for the month, causing eyebrows to be raised when Prince William’s United for Wildlife, which has been very successful in approaches to stopping the illegal wildlife trade, was not selected while the Leonardo DiCaprio Foundation was. If that wasn’t enough, the private christening comes right after revelations that more than two million pounds of the Queen’s Sovereign Grant had been poured into renovating their new home, Frogmore Cottage.

Many are now chastising the media. Though their coverage is essential to spreading the word of the Sussexes’ charitable efforts, many devoted fans lambaste them for also writing more critical articles, including reporting that Meghan has been nicknamed the “Difficult Duchess” by palace staff for texting them at 5 a.m, or when Prince Harry appeared to let his personal animosity toward U.S. President Donald Trump (who had slammed Meghan for being “nasty”) get in the way of the good manners essential to an important state visit.

Yet there is a tacit bargain between royal parents and the mainstream press in Britain. Royal children are off-limits for the mainstream press unless their parents talk about them or they appear in public at events like a polo match where their parents know their movements will be documented, if not by the media then by everyone else with a smartphone. In return, the media get regular visual updates of the children so they have something to fill their pages and screens. Importantly, the mainstream media organizations don’t publish paparazzi images (while international websites and publications are notorious for paying for such images). Every now and again, a rogue operator breaks the agreement, but by and large, the pact has held.

That’s why there are no front-page photos of Kate on a school run with her young children, and, in return, why the media get to document events such as christenings. At least until recently. Just as William and Kate pushed the bargain, releasing boringly similar still photos of their children for years, Harry and Meghan are pushing it again, this time cutting out the media altogether from an event and not providing a list of godparents.

READ MORE: All hail the Queen’s favourite (hint, she’s not Meghan or Kate)

They’ve held back seemingly trivial details before. When Meghan gave birth to Archie, the couple gave the impression it was a home birth. In fact, she delivered her son at the posh Portland Hospital in London, a fact that later emerged on his birth certificate. So why hide that detail, knowing it would send the media into a reporting frenzy?

This time it’s the names of Archie’s godparents, with a press release stating, “the godparents, in keeping with their wishes, will remain private.” His future may be as a private citizen, but Archie is also near the epicentre of the most famous family in the world. His daddy is the grandchild of a monarch and the son, brother and uncle of future kings, while his great-grandmother, Queen Elizabeth II, is the supreme governor of the Church of England.

There are well-tested ways to manage press attention. When the list of Meghan’s bridesmaids and pageboys was released ahead of their 2018 wedding, it came with a note that they and their families didn’t want to be interviewed. The press complied. As for Archie’s godparents, normally their names would be made public under a law governing Church of England records, except it turns there is a royal exception.

Of course, the lack of information became news itself. And that dichotomy was only heightened when Meghan appeared at Wimbledon with two old university friends to cheer on Serena Williams, spawning the inevitable speculation as to whether the pair were Archie’s godparents. It felt like the Sussexes were picking a battle where none is needed. No one but those really interested in royalty will ever remember the godparents’ names a few days after the event. (Quick, can you remember the names of Meghan’s bridesmaids and pageboys?).

RELATED: The one royal who knows how to trump Trump

It’s not a great set-up to a busy fall, for Harry and Meghan are going on tour in Africa on behalf of the government. There were breathless reports in the spring that they were going to spend a few years, then perhaps a few months, in Africa, promoting the Commonwealth, a cause in which Harry is playing an increasingly prominent role. The Sussexes didn’t deny the reports, but after issues were raised (how would the countries they live in be selected, who pays the high security costs?), the concept was quietly downscaled to a regular tour, focusing on South Africa, though Harry alone will continue on to Malawi, Botswana and Angola. (Archie’s not officially confirmed, but, by all reports, he’s going to join his parents.)

For now, Harry and Meghan are largely absent from royal duties as they focus on the most important person in their life, Archie. Meghan has undertaken just three since giving birth, including attending the Trooping the Colour in June, while Harry is performing about a dozen each month. The Queen always spends stretches of the year away from the public eye, doing essential duties but also recharging for a lifetime job spent largely in the spotlight. Perhaps these months will also give Harry and Meghan the same opportunity. And a chance to decide the balance between their public and private lives.