For Prince Harry and Meghan Markle's wedding, the souvenirs are finally worth savouring

From cheeky plate designs to tchotchkes that help uplift Britain's homeless, the tired world of royal commemoratives is being swept up by new sensibilities 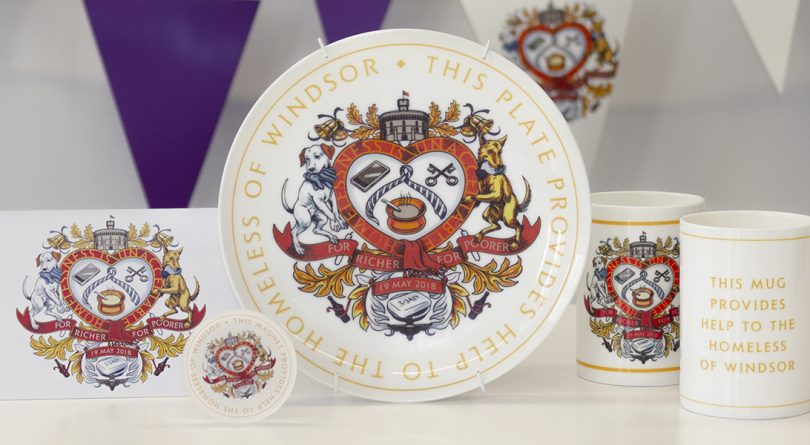 A selection of the wares on offer from the For Richer, For Poorer line of royal commemoratives.

On a rainy Friday in late April, thousands of tourists arrived on the tiny, two-carriage train into the Windsor station to see its famous castle, where Prince Harry and Meghan Markle will marry in the medieval splendour of St. George’s Chapel on May 19. Some of those visitors may have ventured to the flower-bedecked pedestrianized shopping area immediately adjacent the train station and castle. But few ventured a five-minute walk away to Victoria Street, where the Windsor Homeless Project operates in the Baptist chapel, a community hub complete with a tuck shop offering beans on toast for $1.90. That morning, some 23 people streamed into a room stuffed with sofas in the project’s first hour, asking for help from Murphy James, the project’s development manager, with everything from sleeping on the streets to eviction letters.

While the persistent problem of homelessness would normally not be on a tourist’s radar, the royal wedding has offered a unique opportunity for royal fans to help them by buying the most ubiquitous of souvenirs: royal commemoratives. The Windsor Homeless Project has teamed up with Revolt, a London-based communications firm headquartered in the über-fashionable neighbourhood of Camden, to produce a range of royal gifts called For Richer, For Poorer that directs all profits to the Windsor Homeless Project—just one of many businesses who are using the big day as an opportunity to bring a different twist to the staid commemorative industry that always springs up around major royal events.

The idea was spurred by some anti-homeless comments made earlier this year by Simon Dudley, the Conservative leader of the Royal Borough of Windsor and Maidenhead council. In January, he called for police to clear the homeless from the castle area before the royal wedding, saying the “epidemic of rough sleeping” as well as “aggressive begging and intimidation” and “bags and detritus” on the streets, should not be tolerated.

“His tone, combined with his lack of empathy and understanding—if you’re homeless you need to be coerced off the street and marked out, rather than being given opportunities and a way to grow out of the issue—struck a chord,” says Alex Lewis, a co-founder of Revolt. At the time, the firm was asking its clients which issues and projects it should take on as pro bono efforts. Homelessness was one of the top answers.

They didn’t want to just create an advertising campaign, but rather to spark conversation and debate. So they got the idea to reimagine royal commemoratives, often plastered with royal crests and coats of arms, in time for Harry and Meghan’s wedding. “What if we used that in a way to tell a more understanding story about the homeless?” Lewis recalls thinking. Their crest includes the usual bells, bows and wedding date, as well as symbology that discusses the issue of homelessness, such as dogs for companionship instead of a typical mythological unicorn or dragon, a mobile phone to stay connected with society, a bowl of soup symbolizing a shared meal, keys for a home, soap for keeping clean and even tampons for the uniquely female challenges of being homeless.

At the same time, Revolt reached out to the Windsor Homeless Project, which will get the proceeds, and to make sure their concept was done with sensitivity towards the homeless. Murphy James, bestowed with boundless energy and passion towards his calling, was initially doubtful it would amount to anything. “We have lots of meetings with people who have lots of ideas and most never come to fruition,” he says. Soon he realized Revolt was very serious.

READ MORE: Take a look back at royal weddings through the ages

Their seven offerings, which include fridge magnets, postcards, mugs and packs of bunting, are a bit pricier than most mainstream commemoratives because they are more than mere dust-collecting tchotchkes. “You aren’t paying 25 pounds for a tea towel, you’re paying 25 pounds for what that tea towel stands for,” James explains. In essence, they are “a gift with donation.” To drive home that point, every item is linked to a related necessity. So the sale of tea towels go towards moving-in packs of home essentials while purchasing a T-shirt helps buy clean clothing basics such as socks and underwear.

Everyone who purchases one of the For Richer, For Poorer items is “contributing towards giving someone a better way of life,” James says. “It’s not just about commemorating a day, it’s about commemorating about what is happening on that day. It’s Harry and Meghan’s wedding—and they should be allowed to celebrate their wedding as everyone does—but by buying these pieces of memorabilia you’re also acknowledging that there are other things going on the world as well.” The needs are pressing, even in such an affluent town. Windsor, with a population of around 35,000, has around 10 to 15 rough sleepers but the bigger issue for James is hidden homelessness, which he believes affects hundreds if not thousands in the area.

The offerings are available online as well as in retail shops, though only one, Vinegar Hill, located around the corner from the Baptist chapel, stocks the items in Windsor. As the wedding date comes closer, Revolt reports that traffic has surged online, with most sales coming from the United States and Britain, and advances in just-in-time manufacturing—which reduce the concern of being stuck with unsold products—are allowing them to keep up with the demand. 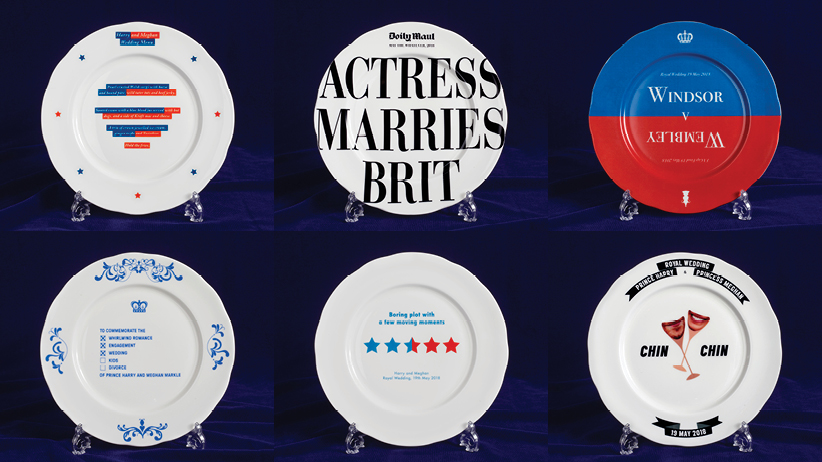 Another creative team taking advantage of these new processes is K.K. Outlet, which produced some of the most unconventional offerings for the wedding of Prince William and Kate Middleton in 2011. Back then, Dave Bell, a London-based creative partner at the international design firm, gave his colleagues a brief: “Make royal wedding memorabilia for the Facebook generation.” The results were cheeky, irreverent and very popular. They initially expected to move 10,000 plates with slogans like “Will 4 Kate 4 Eva”; in the end, they sold double that number for $25 a plate.

For Harry and Meghan Markle’s nuptials, Bell and K.K. Outlet are shaking up the commemorative market once more, creating “royal crockery to raise a smile, poke fun at the couple, face palm the decision to hold the wedding on the day of the FA Cup Final and allow us to take a breather from Brexit.” The creations from Bell and his colleagues reflect the times as well as the more outgoing personalities of the bride and groom. “Harry is more of a wild child than Will, to put it mildly,” Bell says, while Meghan is an American actress. So one features a “To commemorate the” checklist that includes whirlwind romance, engagement and wedding (all checked), while kids and divorce are left strategically empty. Another features a blaring Daily Mail tabloid headline, “ACTRESS MARRIES BRIT” under a “May the Whatever 2018” dateline. Using print-on-demand techniques, Bell believes it will take just seven days for customers to receive a plate, each of which costs 20 pounds ($35). 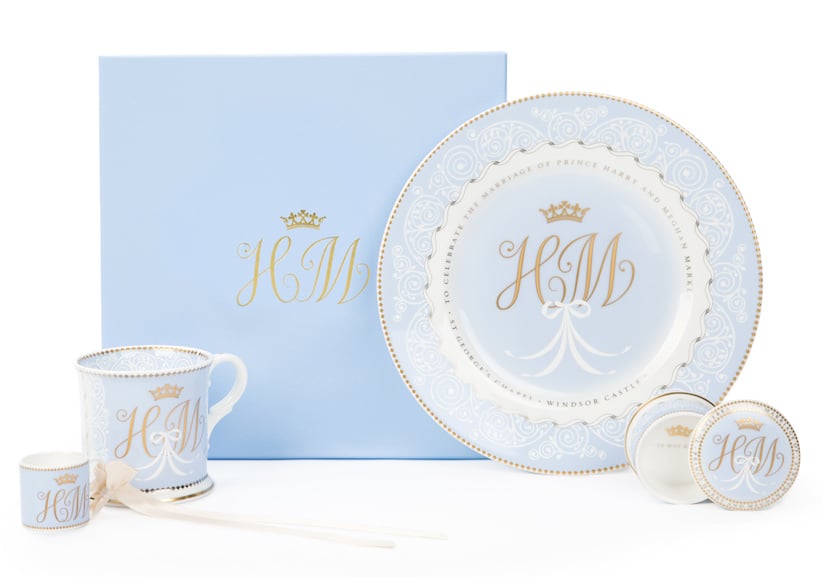 Still, there’s something to be said for the classics. The Royal Collection Trust (RCT), which manages the public openings of the Queen’s official residences and looks after one of the largest art collections in the world, the priceless Royal Collection, has perfected the art of creating classic commemoratives—plates, coffee mugs, tankards and pillboxes are perennial favourites—for every conceivable royal event ranging from birthdays and new babies to the upcoming royal wedding. Normally the design process can take between six and 12 months before production begins in Britain’s home of pottery, Stoke-on-Trent, where items are made by hand using traditional methods, explains Ian Grant, RCT’s production controller, in an email. This time, the items went on sale just five months after the engagement was announced.

The careful attention to detail is noticeable, especially when compared to more mass-produced products; for William and Kate’s wedding, for instance, one Chinese producer used Harry’s picture on its mug instead of his brother’s photo. The Royal Collection always examines the location and event being celebrated for design inspirations of its offerings. For Meghan and Harry’s wedding china, it chose to adapt the elaborate decorative ironwork of the mid-13th-century Gilebertus Door at their wedding venue, St. George’s Chapel. Though the background colour of the door is red, the RCT chose a “crisp blue” for its china. “It was felt that this blue, along with the raised enamel treatment of the Gilebertus Design, were both fresh and contemporary, reflecting a young and modern couple,” explains Grant.

Though RCT’s offerings are near the top of the mainstream commemorative market—ranging from a shortbread biscuit tin for $11 to a large plate for $85—they are dwarfed by the pièce de résistance in the For Richer, For Poorer range: a commemorative plate costing 5,000 pounds ($8,700). That’s because the price is really for a remarkable product: getting someone off the street for a year. The buyer contributes furniture, kitchenware, appliances and everything else needed to set up a home, plus a “living wage for the support worker that provides the indispensable guidance and companionship needed to stay on track despite challenges and setbacks,” as its website states.

Murphy James of the Windsor Homeless Project thinks that both Prince Harry and Meghan Markle would approve of it taking advantage of their wedding to start a discussion on homelessness through their commemoratives. “I think they do amazing work, especially charitable work,” he says, “and I wish them well on their big day.” Perhaps one of the wedding gifts they receive will be that plate.