From Victoria Rock to Mount George V, how royal is Canada?

There are some 1,500 royal place names in the country, mostly in Ontario, Quebec and B.C. 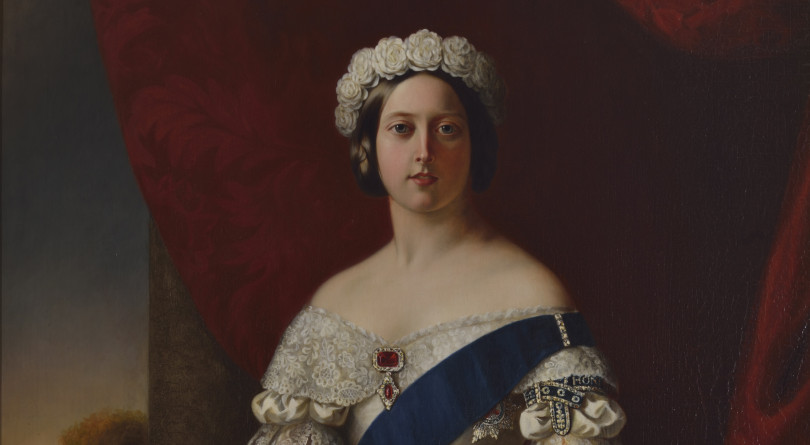 There’s always a certain amount of rivalry within families. When the clan is royal, the stakes can become very high and, at the same time, very trivial. On Sept. 9, 2015 at around 5:30 p.m, Queen Elizabeth II surpassed her great-great-grandmother Queen Victoria as the longest-reigning British monarch in history. The 19th-century monarch herself had claimed that record from her grandfather, George III, on Sept. 23, 1896.

A bibliographer at Windsor Castle sat down with historical records to do the precise mathematical calculations on exactly when Elizabeth II would take over that particular title. Among her various records, she’s also the oldest British monarch, the longest-reigning current sovereign and has the longest marriage of any British monarch (72 years in November).

Those records are ephemeral. Place names are far more permanent.

READ: Royal baby steps: an FAQ about what’s next for Archie

So, for the 200th anniversary of Queen Victoria’s birth on May 24, 1819, Maclean’s dove into the Canadian Geographical Names Database of Natural Resources Canada to look at how this northern realm has commemorated its monarchs and its connection to the British Crown (and later, the Canadian Crown).

It’s not hard to find royal markers. Two of the largest cities in Saskatchewan—Regina (Latin for queen) and Prince Albert—are named after Victoria and her husband. Prince Edward Island is named after Victoria’s father, who spent a chunk of his military career in what is now Canada. The capital of British Columbia is named after the monarch with the same name while residents of a new town in British Columbia used a plebiscite to confirm the choice of Prince George, honouring the present Queen’s uncle, Prince George, Duke of Kent.

The province of Alberta was named by the Marquess of Lorne, then governor general, after his wife, Princess Louise Caroline Alberta, the fourth daughter of Victoria and Albert. (Yes, “Alberta” is for Prince Albert.) The GG was so enraptured that he wrote a poem to his decision, which starts with:

In token of the love which thou hast shown

For this wide land of freedom, I have named

A province vast, and for its beauty famed,

By thy dear name to be hereafter known.

Alberta shall it be!

Virtually every village, town and city has King and Queen streets, often located next to each other (Toronto has adjacent subway stops). In Ottawa, King George Street is parallel to that named after his wife, Queen Mary, which in turn, is next to Prince Albert Street.

Since the Conquest of 1760, there have been just five monarchical names (George has been used five times and Edward twice, while William, Victoria and Elizabeth have each had one outing). It’s not surprising that the names of monarchs who were on the throne when immigrants, many from Britain, poured into Canada are the most popular:

In addition, there are 12 references to Prince Albert. And when it comes to royal titles themselves, it’s “prince” that takes first place, with 117 names in the Canadian Geographical Names database, followed by queen (or reine or regina) with 94, then king (roi, rex) is tied with princess (or princesse) with 47 references. 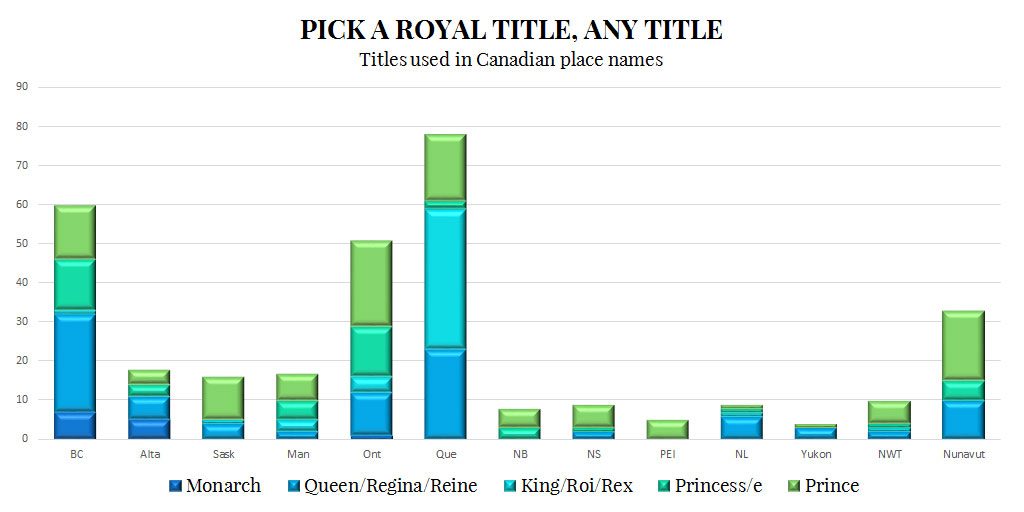 While Maclean’s created an Excel document filled with all sorts of Canadian geographical names, the results should not be interpreted as a scientific survey. That is because of one simple fact: it’s not possible to determine exactly why the name of every place in Canada was chosen. Sometimes the intent is clear—King George V Mountain in Nunavut is named for the present monarch’s grandfather, who reigned from 1910 to 1936. Princess Charlotte Island in eastern Ontario is for the popular, beautiful princess who died in childbirth in 1817.

Other names are obviously not meant to reference royalty, including references to saints and non-royals, including Parc Elizabeth-Lochtie in Saint-Bruno-de-Montarville, Que., as well as Saint-Louise, N.B. Some aren’t so clear cut. While Lake Louise in Alberta was named after Queen Victoria’s fourth daughter, it’s unclear if every one of the more than 20 Lac Louise names in Quebec are also to honour the royal. And though there are 36 places with roi, king or rex in the title, many could refer back to the French monarchs who once ruled over New France. Still, royalty is royalty.

While obviously unrelated names were excluded from this survey, the rest aren’t thrown out. So, treat the analysis in the way it is intended, a lighthearted exploration of the astounding diversity of Canadian place names. Because how else would we know that Charlotte, N.B., has a river feature named Victoria Deadwater? Or that a salmon hole in Quebec is named Queen Elizabeth Rise?

While some naming authorities chose obviously royal designations—there is a peak in British Columbia called The Queen, with a capitalized “the”—others got clever with their allusions. There are 12 references to Connaught (Victoria’s third son, Prince Arthur, Duke of Connaught, was governor general from 1911 to 1916), 58 places called Windsor (the royal family’s name comes from the castle), while Balmoral, the Queen’s private estate in Scotland, gets 23 geographical references in Canada including Balmoral Beach in B.C. and a brook in Nova Scotia. 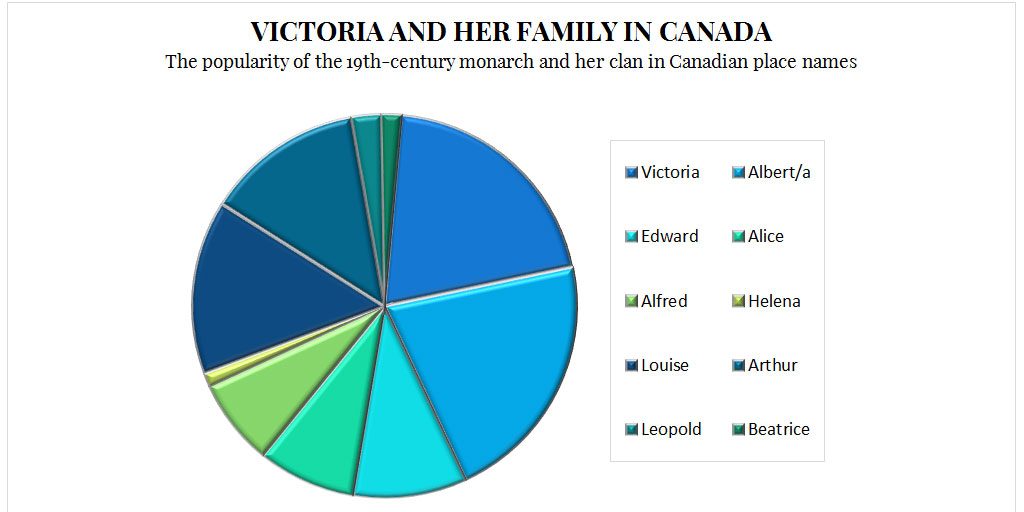 The Victorian era was definitely the time to use royal names for Canadian places. Of the nearly 800 places that use the first names of Victoria, Albert and their nine children (their first is also named Victoria), those of the monarch and her husband are the most popular, accounting for around 40 per cent of those names.

After eliminating overlaps—Queen Charlotte Channel in New Westminster, B.C. appears in “Charlotte” as well as “queen” categories—there are some 1,500 royal place names in Canada. The two large provinces of Ontario and Quebec dominate the rankings, with Quebec having more than 450 names (though with that caveat that many may not be named after royals) and Ontario topping 275. British Columbia is also in the running, with approximately 250 royal place names. The smallest province, P.E.I., takes last place among its brethren with less than two dozen royal names, though it has seven devoted to Alexandra (the wife of King Edward VII) including a community, shoal, bay, point and harbour. Nunavut is the territory with the most, accounting for nearly 70 per cent of royal names in the North. 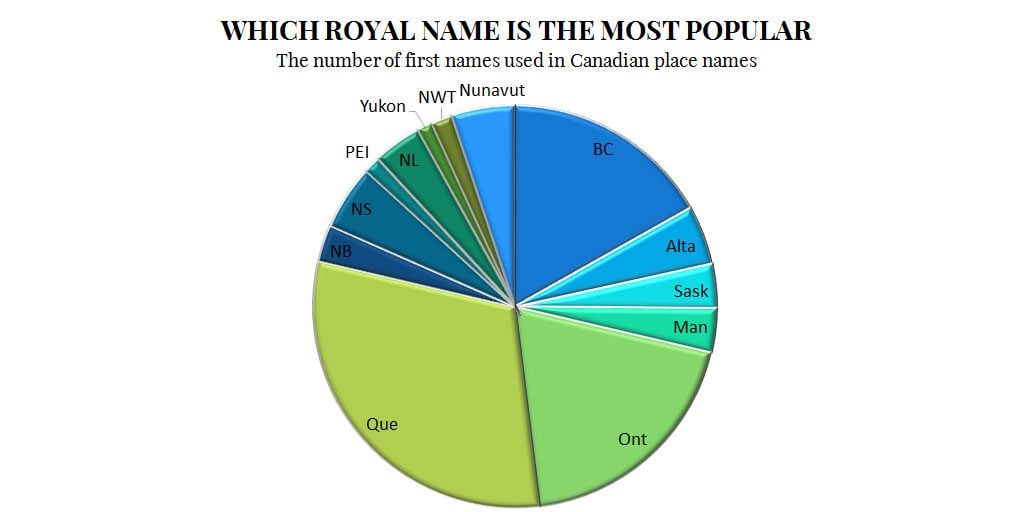 And the naming continues. Lakes in Manitoba are being named after some of Queen Elizabeth II’s grandchildren, including Princess Eugenie and Princess Beatrice, daughters of Prince Andrew. So while it’s unlikely the country will name a new city or town after a royal, there are plenty of lakes, shoals and points still needing monikers. Archie Lake, anyone?