Royal watchers are puzzled by the trip, but at least it's not the disaster that was Elizabeth's 1980 visit 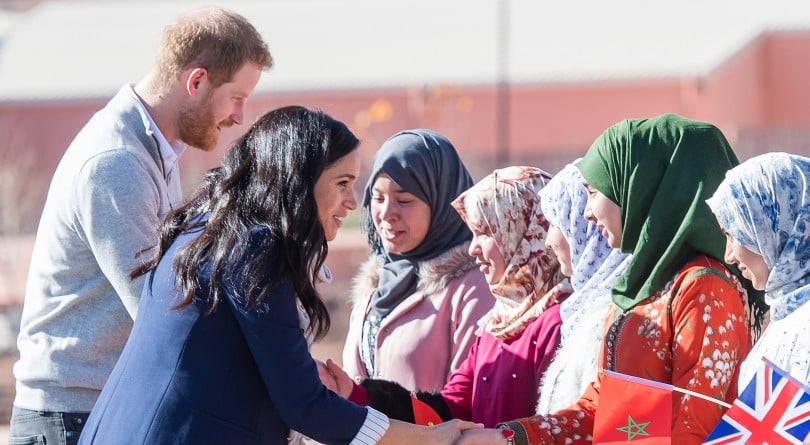 Prince Harry, Duke of Sussex and Meghan, Duchess of Sussex are welcomed at a boarding house for girls ages 12 to 18 by the Moroccan NGO 'Education For All' on February 24, 2019 in Asni, Morocco. (Photo by Samir Hussein/WireImage)

The short visit to Morocco by Prince Harry and Meghan, Duchess of Sussex, got off to an inauspicious start when their commercial Royal Air Maroc flight was delayed for 90 minutes. By the time they landed, the beautiful sunset had come and gone, leaving them to shake hands with dignitaries and for Harry to inspect a guard of honour in the dark.

That unpromising start heralded what is a rather odd royal visit. Usually foreign trips are announced well in advance, and the itinerary is revealed in plenty of time to allow the media to plan its coverage, and to reach out to organizations that the royals are going to put in a welcome spotlight.

Not this trip. It was revealed only two weeks before its start. And aside from a two-sentence announcement on Feb. 8—“The Duke and Duchess of Sussex will visit Morocco from Saturday 23rd February to Monday 25th February 2019. The Duke and Duchess’s visit is at the request of Her Majesty’s Government”—no other information was released to the public until four days before the trip.

It was Thomas Reilly, the social media-savvy British Ambassador to Morocco, who revealed the focus of the trip: “women’s empowerment, girls’ education, inclusivity and the encouragement of social entrepreneurship.” Those are areas of concern for both Meghan and Harry.

Usually such quick foreign trips are packed with events from beginning to end. Not this one. The first full day saw three relatively short events in a rural town—seeing one of a series of boarding houses run by the NGO Education for All, which allow girls from the countryside to get a secondary education in town; visiting the secondary school; and finally bestowing an honour on the British founder of the NGO. After a private lunch at the nearby resort owned by billionaire Richard Branson, Harry and Meghan flew back to Rabat. The three engagements took just three hours. After an afternoon off, they attended a reception at the British ambassador’s residence.

READ MORE: Will Harry and Meghan’s baby get a royal title?

Monday’s events, which will also be bunched into a three-hour block, include visiting an equine therapy centre for children with special needs, a cooking school for disadvantaged children and a meeting with young social entrepreneurs.

The causes are all worthy. For instance, women’s education is crucial to the future of Morocco. As Kensington Palace noted on Twitter, 70 per cent of females in the nation are illiterate and many can’t access secondary education, which is why such boarding houses are so vital. Yet why the huge logistical effort to organize a trip to Morocco to devote a bit more than six hours to social causes there?

Harry and Meghan are the biggest stars in the royal firmament—a sign of how much interest there is in the couple is that the royals were accompanied by three communications staff as well as virtually the entire royal press corp.

And though the two are famous for their warm, spontaneous interactions with crowds of onlookers, none of the events are open to the public. So, the images will be of the royal couple meeting a few people here, and chatting with a few more there, rather than that energizing walkabout in Sydney that launched the royals’ hugely successful tour of Australia, Fiji, Tonga and New Zealand last autumn.

More crucially, in the weeks before the lead-up to Brexit, when Britain is desperate to shore up alliances and trading partners, why would the government “request” their two most valuable players visit a poor nation in North Africa that sends only 3.2 per cent of its exports to Britain?

The odd feel of this quick trip hasn’t gone unnoticed. “It is just so askew, off kilter, weird,” one veteran royal watcher messaged, “like there’s something we don’t know.” Another echoed that sentiment: “It is so weird; seems like there must be another agenda—why send seven-month-pregnant Meghan here for this? I don’t get it.”

Perhaps it is an echo of the famous previous royal trip to Morroco—the notorious “tour from hell.” In 1980, at the end of a two-week foreign trip, Queen Elizabeth II stopped in Morocco, then ruled by King Hassan II, the present monarch’s father. The head of state, who was infamous for his ill-temper, capricious nature and ability to avoid assassination attempts, ripped up the agreed-upon schedule, drove usually unflappable royal courtiers to despair and insulted the Queen.

“Shortly after the official welcome, the tour started its decline and took on an Alice in Wonderland quality that had none of Lewis Carroll’s zany charm,” wrote royal biographer Ann Morrow, as Hassan decided to go golfing instead of being at Elizabeth’s welcoming lunch.

That was a foretaste of things to come. After the Queen was more than an hour late for the state banquet, it emerged that she’d been waiting in her car, in evening gown and tiara, at the guest palace, somewhat comforted by a martini passed to her by Prince Philip’s private secretary. When Hassan tried to blame the mess on one of her officials, she snapped back, “I’ll thank you not to speak about my staff like that,” reported royal author Robert Hardman in Our Queen.

Troubles continued after delayed banquet when she was taken to an unplanned reception with Moroccan dignitaries. In the middle of the night, the press was summoned to meet her private secretary, Philip Moore, who told them “The Queen has never been so angry,” Morrow recounts. As headlines screamed about the insults, more was to come. Hassan abruptly cancelled the trip to Fez. Then, during a drive in Marrakesh, the motorcade suddenly stopped and the Queen was abruptly moved to another car. “Security reasons,” Hassan explained. Finally, they made it to the Atlas Mountains. There, in an elaborate tent that provided some cover from the intense heat, the Queen waited and waited and waited for her host to appear. She politely stood up when he darted out from his air-conditioned trailer a few times, but was essentially abandoned for the afternoon while an astonished press recorded the entire saga to an incredulous world.

Those famous Atlas Mountains are where Meghan and Harry spent time visiting that boarding school for girls, among other events. This trip may be an odd duck, but it is a swim in a calm lake compared to what Harry’s grandmother had to endure.