Her Majesty's cane: Yes, it's a sign of age, but she wields it well

The Queen has begun using the accoutrement during public appearances, proving once again that she's wise beyond her years 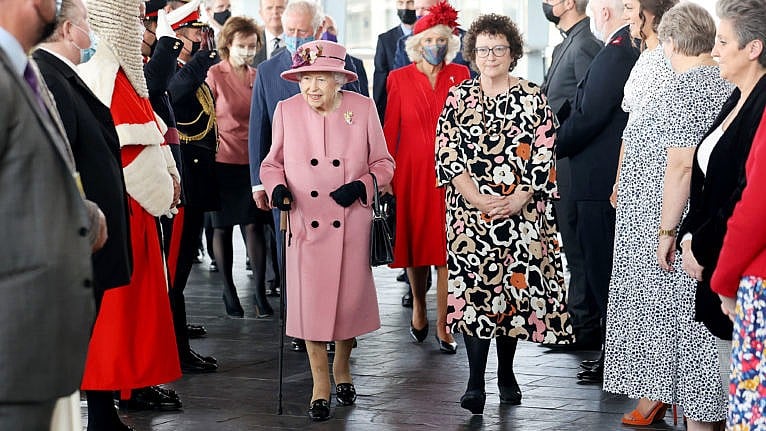 The Queen's made use of her cane in Cardiff on Thursday during the opening of the sixth session of the Senedd (the Welsh parliament). (Chris Jackson/Getty Images)

The regal style of Queen Elizabeth II is so instantly recognizable that kids can draw it from memory: a brightly coloured coat with matching hat, a triple strand of pearls, diamond-and-pearl earrings, a Launer handbag, Anello and David shoes and a brooch from her vast collection that is chosen specifically for the occasion.

This week, she added one more item: a cane.

On Tuesday, after the royal party arrived at Westminster Abbey in London for a service marking the 100th anniversary of the Royal British Legion, Princess Anne discreetly handed her mother a utilitarian black stick with beige triangular handle that the monarch used to navigate the uneven cobblestones. After the service, she held it in one hand along with the purse on her arm, while the other held a bouquet of flowers.

Then, two days later, as she exited the royal limousine, her lady-in-waiting handed her another stick featuring with a more traditional cane handle, for the opening of the Welsh Parliament, which she attended with her eldest son, Prince Charles, and his wife, Camilla, Duchess of Cornwall.

Anyone fearing that the addition of a cane is a portent of something awful should take a deep breath. The ravens are still at the Tower of London and all is well in the Commonwealth. Moreover, video shows she used the sticks delicately, barely putting weight on them, as if they are another layer of protection for someone a mere five years away from her 100th birthday. Indeed, she entered Westminster Abbey using the stick with her left hand and exited with it in her right.

(To put this perspective, Elizabeth II’s cousin Queen Margrethe II of Denmark regularly sits during engagements in which she used to stand. And she’s just 81.)

Interestingly, the first cane, which looks more like a telescopic walking stick than a mobility aid, isn’t a new purchase. Industrious photo editors at the Daily Mail dug up every photo of the Queen with a walking aid and found one of her using it in 2004 at the launch of a cruise ship. Elizabeth II appears to be one of the healthiest 95-year-olds around, and shows no signs of needing to stop doing the job that she’s had for 69 years. If anything, she’s picking up steam after 18 months largely isolated behind palace walls due to public health concerns. By the end of September, she’d already undertaken 139 engagements, including a packed schedule in June during the G7 meeting in Cornwall. Aside from a few other rare occasions during her 69-year-reign, the most famous appearances of the regal canes were a few decades ago when leaving hospital after surgery to remove broken cartilage from her knees.

Still, people worry. A concerned 82-year-old, and fellow cane user, wrote to the Telegraph, cautioning that the Queen’s practice of holding flowers or purses while using a cane is “a trip to disaster.” Sheina Burns’s recommendation: “The Queen’s lady-in-waiting should carry Her Majesty’s handbag, and then any flowers given to the Queen.”

At the same time, some questioned why so much attention was being paid to a nonagenarian using a cane. The answer is simple: this woman is head of state of 16 realms, including Canada, where there are certain duties that can only be carried out by a monarch, such as appointing a new governor general (or dismissing one). Unlike Britain, Canada has no Regency Act, so a seriously ill head of state could open a constitutional can of worms.

If anything, such practicality as that displayed by the Queen can only be an inspiration for anyone dealing with an obstinate relative who refuses to touch a cane or walking stick; they help avoid broken hips and other age-related calamities. In 2014, the Queen decided not to navigate a tricky set of stairs while wearing the full robes of the Order of the Bath as well as evening gown and tiara, instead delegating that part of the event to her son, Charles. Such hazards might also explain why she’s now being accompanied by family members on more high profile engagements, such as the two this week.

There’s also a bit of irony. While the Queen is rarely seen using walking sticks, her 72-year-old son and heir, Charles, has a big collection, and uses them often when in the countryside. Perhaps she could borrow a few from him if she wants to match her newest accessory to her regal uniform.