In the beef between Prince Harry and the royal photographers, no one wins 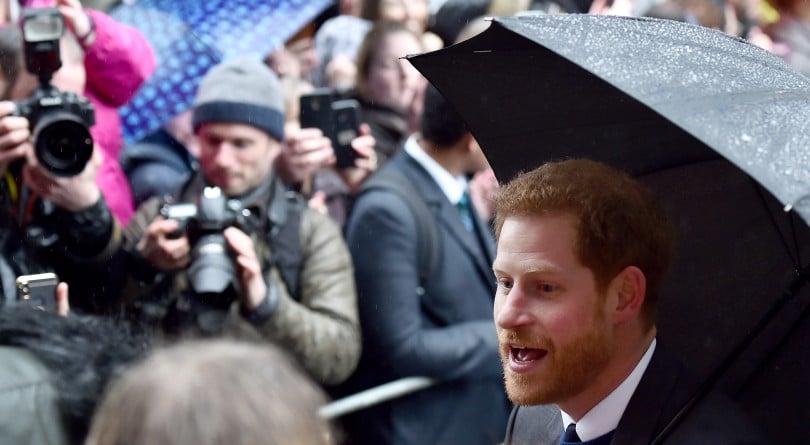 Prince Harry interacts with the crowd as photographers snap photos behind him outside the Crown Liquor Saloon during his visit with Meghan Markle to Northern Ireland on March 23, 2018 in Belfast, Northern Ireland, United Kingdom. (Charles McQuillan/Getty Images)

The wedding between Prince Harry and Meghan Markle may be the social event of the year. Hundreds of thousands will buy special commemorative editions of newspapers and magazines; millions more will watch it on their TVs or online. Yet it could also mark a nadir in the relationship between Harry and the royal photographers who follow the Windsors everywhere.

In an era where claims of “fake news” are now regularly deployed to cast doubt on truthful reportage, and where members of the media are regularly disrespected, this may seem de rigeur. It may even seem understandable, given that these photographers are known to roam like packs of dogs, snapping at royals’ heels. But they’re also invaluable in giving royal causes publicity. Indeed, last September, Prince Harry courted the royal photographers and reporters who covered his Invictus Games in Toronto, generating inspiring stories for a worldwide audience. Then, he chatted amiably with the media while they worked flat out in sweltering heat.

Now, for his own wedding, Harry is telling them that he doesn’t need them for publicity. So when photographers recently learned they’d be shut out from capturing the wedding’s big shot—banning even core members of the royal rota, an organized system by which photographers pool their pictures so all media get equal access to an event, from snapping the moment where the bride and groom will emerge from St. George’s Chapel as husband and wife—they went public with their displeasure.

“Without a couple photo, it’s all quite disheartening,” one unnamed royal photographer told Maclean’s. They were willing to pay for a spot in the media stands, like they did for William and Kate’s wedding, they said. “It would be fine if we actually got to photograph the couple leaving the church as I have done at countless royal weddings all over the world,” vented Tim Rooke, a veteran royal photographer for Rex Shutterstock, on Twitter last weekend.

Rooke also revealed that the plans had been altered to exclude them. While rota members were originally to get into the courtyard immediately in front of the chapel, now only four Press Association photographers will be there, capturing pooled shots. “Everyone except @PAImages excluded from main picture,” he wrote. “Have seen original Cabinet office plan clearly showing rota positions directly opposite church door but someone changed it.” Every other photographer will have to make do with second-best photos of the couple on their post-wedding carriage ride, a far cry from the full-length photos that will command the best prices.

When another photographer piped into Rooke’s Twitter rant to ask, “How many guesses do we get as to who changed it?” Rooke responded with a string of sarcastic monocle and thinking face emojis—the unspoken answer being that Harry did. That’s also the assumption of Arthur Edwards, the Sun tabloid’s royal photographer who has captured iconic images at seven royal weddings. “I can’t imagine the press officer advising that to the prince,” Edwards told the New York Times. “He and Meghan have seen what’s been written and said, ‘We don’t want anyone near the wedding.’ That’s a clear message, yeah.”

Adding to their indignation is the price they have to pay for B-class positions within Windsor Castle: 684 pounds, which, once VAT is included, comes to 821 pounds (or CAD$1,435). For that cost, all they will get are “bits and pieces,” the anonymous photographer groused, including some of the arrivals and departures of guests, though even some of those are being transported in buses, which could block their views. So high is the fee that a student photographer named Benjamin Wareing started a GoFundMe page to fundraise the payment. “This is a surreal price for a student like me, and heartbreaking given the fact I’d love to share photographs of the day with my followers,” he said.

Why are the Windsors shutting out photographers in this way? Harry and brother William have always had a fraught relationship with the media, even mainstream organizations, a disaffection that came from how tenaciously the paparazzi pursued their mother, Diana. Indeed, Diana was being followed by paparazzi when a car carrying her and her lover Dodi Fayed crashed in a tunnel in Paris; an inquest jury found the paparazzi partly to blame. “One of the hardest things to come to terms with is the people who chased her into the tunnel were the same people who were taking photographs of her while she was still dying on the back seat of the car,” said Harry in a 2017 BBC documentary. “She’d had quite a severe head injury but she was very much alive on the back seat. And those people that caused the accident instead of helping were taking photographs of her dying on the back seat.”

William and Harry have never accepted the attention inherent in their positions like other royals, even though the top royal photographers today bear little relation to the cowboy paparazzi of a few decades ago, and even though an intense media focus is sometimes inevitable, especially at a large royal event. Still, seven years ago, William allowed banks of photographers to capture every move of his London wedding to Kate Middleton from carefully chosen media points, including stands outside Westminster Abbey and Buckingham Palace. This time, with only Press Association cameras allowed in for the big moment, it’s unlikely that the veteran photographers of the royal rota will have their usual chance to have their pictures dominate front pages.

The irony isn’t lost on photographers who regularly take assignments to cover minor royals that promote their charitable work without hope of significant returns. Last fall, Rooke photographed a trip to Bangladesh by Sophie, countess of Wessex, that focused on efforts to eliminate preventable blindness.

“It’s just rather embarrassing that I can come to Holland, Norway, Sweden, Denmark, Brunei, Spain, Greece and any other place that I have covered a royal wedding and get charged nothing, yet in my own country we are treated with contempt,” Rooke tweeted. He went on to say how much he was looking forward to this week’s visit by Prince Charles and Camilla, duchess of Cornwall, to France and Greece.

READ MORE: Will Meghan Markle wear a tiara on her royal wedding day?

This is the latest in a series of slights aimed at the media by the younger royals of the House of Windsor who want to maintain tight control their public images. So while other royals use professional photographers for official pictures, they often take the images themselves—sometimes with less than professional results. They also eschew releasing videos, which means TV networks are forced to use and reuse the same still images or outdated videos. When William took children George and Charlotte to see their new brother in hospital on April 23, it was the first time anyone had seen the princess in public since June 2017.

For now, William, Kate, Harry and now Meghan are in the drivers’ seats in their relationship with the media. That won’t last; it never does. One day, perhaps coping with a scandal or needing publicity for a pet cause, the balance will shift and those photographers and those journalists whom they’ve belittled and disparaged will assume the power position in their relationship, since royalty and media need each other to survive. And they might not be so quick to forgive and forget. As Rooke says, “It is always a symbiotic relationship, something that a lot seem to forget.”