On Sept. 25, 2017, Meghan Markle stepped out for the first time with Prince Harry. Now, she's the Duchess of Sussex—a moment to look back and ahead at how far she's come 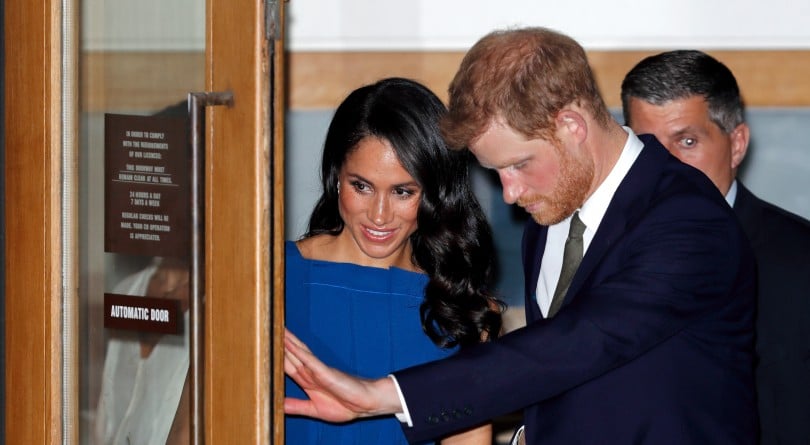 Prince Harry, Duke of Sussex, holds open the door for Meghan, Duchess of Sussex as they depart the "100 Days of Peace" concert to commemorate the centenary of the end of the First World War at Central Hall Westminster on September 6, 2018 in London, England. (Max Mumby/Indigo/Getty Images)

The Year of Meghan started on Sept. 25, 2017, when she appeared in public with Prince Harry for the first time. Before she walked hand-in-hand with her then-boyfriend through Nathan Phillips Square in Toronto, she was largely unknown; sure, she was a successful actress on the TV series Suits and had been ID’ed as Harry’s girlfriend a few months earlier, but she could still walk down the streets of her adopted city in relative anonymity. Not after that afternoon, when it became impossible to avoid seeing images of Meghan and Harry enjoying a tennis match at the Invictus Games (for the record, New Zealand beat Australia 6-3). On that day, Meghan Markle became a superstar.

The following 12 months were a whirlwind, even for a woman who grew up in the entertainment industry of southern California. Meghan moved houses, cities, countries and continents to live in a cottage on the grounds of a historic palace with her Prince Charming. They announced their engagement a mere two months after that first public appearance in Toronto, and they were married six months after that. She ended her acting career—appropriately, her character on Suits got married and relocated—to take up a high-profile position as a senior member of the royal family.

The attention was intense, especially with Kate, the Duchess of Cambridge and her future sister-in-law, largely out of public eye thanks to the arrival of her third child Louis in April. The world couldn’t get enough of Meghan and Harry and their royal romance. The media responded with blanket coverage of all things Meghan, including instant biographical documentaries and wedding specials. Meghan’s every smile, hug, coat and messy hairdo were analyzed for “royal worthiness.” And they had a lot of material to work with: she went with Harry on more than two dozen engagements in the lead-up to their wedding, proving to be relaxed and confident while on engagements, especially when it came to interacting with kids.

It hasn’t always been an easy transition. In the weeks before her marriage to Harry at Windsor Castle in May, her estranged relatives dumped a cascade of negative articles into the media. Her half-sister, Samantha Markle, called her “narcissistic and selfish;” a half-nephew unveiled a marijuana strain, Markle Sparkle; her own father, Thomas, was revealed to having been paid for set-up “paparazzi” photos of him in his hometown of Mexico. Then, after an outcry, he suddenly developed medical problems that meant he couldn’t walk his daughter down the aisle of St. George’s Chapel. And even still, there are clouds that still threaten: specifically, that Samantha continues to publicly pursue her belief that Meghan is ignoring and neglecting their father. On Monday, Samantha’s publicist tweeted that she was coming to London to speak face-to-face with Meghan about their father’s health.

READ MORE: The House of Windsor has never faced an opponent quite like the Markle family

Yet through it all, Meghan—now HRH the Duchess of Sussex—hewed to the royal stratagem of saying as little as possible and just carrying on. That policy paid off last week with more headlines, this time all positive: For the first time, the duchess undertook her own royal engagement when she appeared at the charity launch for Together, a charity cookbook created in a communal kitchen set up in the aftermath of the deadly Grenfell Tower fire, which killed 72 last June, many of whom were minority immigrants. Not only did Meghan write the foreword, praising the kitchen for being “a place for women to laugh, grieve, cry and cook together,” but it turns out she’s been going to the Hubb Community Kitchen since January. Melding cultural identities under a shared roof creates a space for a sense of normalcy.

During the launch, held in the gardens just outside Kensington Palace, it was Prince Harry’s turn to be the supporting spouse, even walking two paces behind his wife while her mother, Doria Ragland, smiled encouragingly and mingled with the Grenfell cooks and their families who attended the event. If Meghan was nervous, she didn’t show it.

“Working on this project for the past nine months has been a tremendous labour of love,” Meghan said in her first royal speech, given confidently without notes. “I just recently moved to London and I felt so immediately embraced by this kitchen—your warmth and kindness, and also to be able to be in this city and to see in this one small room how multicultural it was.”

Ticking off those royal firsts—leading an engagement, giving a speech, and, on Tuesday, undertaking her first solo engagement at the opening an exhibition of Oceanic art—show how far she’s come in the space of just one year. You can even see it in her wardrobe: A year ago, she wore a white shirt and ripped jeans to that first public sighting. For the cookbook event, a blue coat by Toronto design firm Smythe covered her elegant black top and skirt.

Now, after a summer largely out of public view, she’s set for a busy autumn. On Tuesday evening, she will appear in a new documentary on the Queen’s role on the world stage.  On Oct. 16, she and Harry arrive in Sydney, Australia for the start of a two-week, 16,000-km royal tour. Timed so they can attend the fourth iteration of the Invictus Games for disabled military veterans, they will visit Australia, Fiji, Tonga and New Zealand—all Commonwealth nations, as per custom for the first big tour and befitting Harry’s new position as the organization’s youth ambassador.

Virtually the entire British royal press corp is accompanying the duke and duchess on their tour. It’s clear that while the Year of Meghan may have technically ended, interest in the newest royal is still going strong.