Life after Queen Elizabeth II: What will ‘the inevitable’ bring?

Most Canadians don't understand the power of the Crown and its local reps. They should. 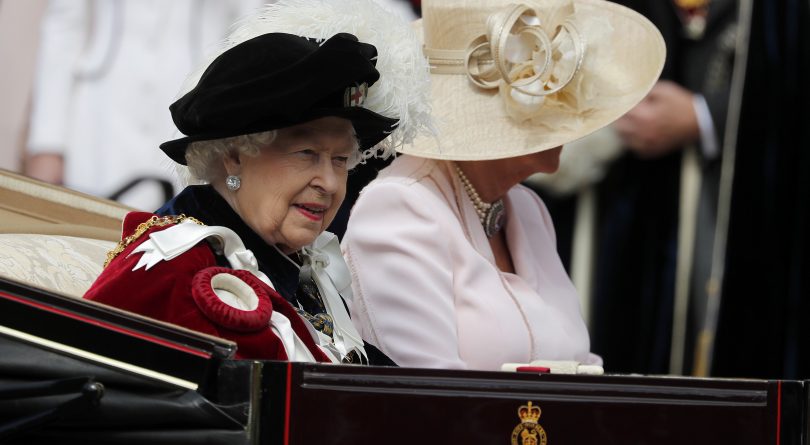 Britain's Queen Elizabeth II and Camilla, the Duchess of Cornwall leave the Order of The Garter Service at Windsor Castle in Windsor, June 17, 2019. (Frank Augstein/AP/CP)

The inevitable. Demise. Passing. Talking about a person’s death can appear rude and insensitive, and so we have a number of euphemisms for the end of human existence. Yet for the experts who have devoted their careers to examining the Crown and the role of the sovereign, talking about the unavoidable is necessary because, at 93, Queen Elizabeth II is in the dusk of her reign and life.

Late last week, the Institute for the Study of the Crown tackled the subject, choosing the theme “A Crown in the time of transition” for its fourth Conference on the Crown, held at the University of Toronto. Among those listening to the lectures were the men and women most directly affected by the changes in the Crown—most of Canada’s viceregal office holders, who had just wrapped up their annual gathering of viceregal representatives, synced with the Crown conference.

During the past decade, a series of Crown controversies has renewed interest in the institution and its powers, including whether governor general Michaëlle Jean should have prorogued Parliament at the behest of Stephen Harper in 2008, as well as British Columbia’s lieutenant-governor, Judith Guichon, denying the Liberal premier’s request to dissolve the legislature and instead asking the NDP’s John Horgan if he could form a government.

READ: Queen Elizabeth II is 93—and yet her workload seems to be increasing

There is the assumption that its rules and conventions are set in stone—known, accepted and unchanging, much like the ancient chair used at every coronation. In reality, “the Crown is carved in water,” says John Fraser, the conference chair and founder of the institute. It’s malleable, adapting to changes in society and nations. For David Williams of the University of Auckland, the Crowns are “shapeshifting;” he showed how the Kiwi Crown is now distinctly different than those in similar realm nations with the Queen as monarch. A big reason is the 1840 Treaty of Waitangi between the Maori and the Crown, which is recognized as the foundational document of New Zealand and affects all aspects of the nation.

Yet for many, any talk of the Crown causes eyes to glaze over. Part of the reason is lack of knowledge. In Canada, civics is mandatory in the schools of only one province, Ontario, and even then, it’s merely a half-course in Grade 10. Only perhaps 15 per cent of the population truly understands how the state works. (If you’re one of that select minority, skip to the next paragraph. Otherwise, here is a simple explanation that Philippe Lagassé, a Crown expert and professor at Carleton University, gave to Maclean’s in advance of the 2016 conference: “The Crown is the state embodied in a person, the Queen of Canada. The Crown permeates all aspects of the Canadian state: judicial power flows from the Crown, executive power flows from the Crown, legislative power flows from the Crown, the concept of the state as a person, so how it holds property, how it employs people, the privileges it has, all these things are monarchical.”)

Listen to Patricia Treble on The Big Story podcast.

Misunderstanding about the Crown abounds, especially on social media, where people read fanciful notions of what the Queen and her representatives can or cannot do. “I knock them down all the time,” notes Dale Smith, a Parliamentary Press Gallery journalist. Canada isn’t alone. “I’m always a bit surprised at the level of ignorance,” says Mark Gower, official secretary to the governor of Queensland in Australia, even with “people you would think should understand the powers and roles of a viceregal.” Like many, he came to the conference not just for the lectures, but also the networking opportunities with his counterparts to pick up tips “about some issues other jurisdictions face on viceregal issues.”

Perhaps the Crown is a bit like vaccines, a bit too successful for its own good. As experts recounted at the conference, its conventions and office holders have been so quietly efficient in dealing with issues that can arise, out of public view, that people don’t realize how and why it’s crucial to the functioning of the state. That leads the citizenry to deem the offices unnecessary and unimportant. Only when conflicts flare into public attention does interest rise, such as in the past few years. Soon, there may be another opportunity. No, not the “inevitable,” but a long-awaited Quebec Court of Appeal ruling on the law governing royal succession, which was changed in 2013 to give royal women the equal right to inherit the throne.

While virtually everyone can ID the Queen, “most Canadians would be hard-pressed to name the current Governor General and their lieutenant-governors,” says political scientist David Johnson of Cape Breton University. And that will be a problem when the new king (likely taking the name Charles III) comes to the throne. Though republican inclinations are slumbering, the change in monarch could change everything, for while the Queen will be mourned, “Charles will be met with ambivalence,” Johnson believes, “There is a different between existing and thriving.”

Some ideas presented during the conference’s sessions were geared toward generating more positive attitudes to how the Crown is perceived. While the choice of the next monarch is set—ignore social media experts: there is no chance of skipping Charles for William—that of the viceregals is equally important in the years to come, Canadian Sen. Serge Joyal argues. “Institutions will never be something other than what their actors do,” he stated, going on to ask the ways “the personality of the person who holds the position and title of Governor General changes the perception of the monarchy.”

Joyal, who has worked with 10 governors general and been on countless royal tours as secretary of state, is concerned that an accumulation of small tweaks and changes made over time has weakened the institution. For one, their term of office has been reduced from seven to five years—with federal elections now set every four years, that creates churn at the highest levels of the state. Pointing out that many federal positions have long terms—the auditor general stays in the job for 10 years—Joyal wants a longer GG mandate to promote stability and “avoid that a change in government will affect objectivity.”

And he criticized the recent habit of selecting relatively young GGs. While not naming names, the objects of his criticism were apparent: Michaëlle Jean was 47 and Julie Payette, 54, when their terms started. Joyal believes the position of governor general shouldn’t be considered “a stepping stone to a future career;” he doesn’t want them thinking, “What am I going to do after that?” but rather consider it the culmination of a life well lived. He also points out that choosing public personalities with no connections to the constitutional monarchy—or with no experience in such hierarchical institutions, such as is all-consuming in Ottawa—means a crash course in understanding a role that is far more complex than most understand.

While viceregals are using community visits and social media to increase their public profile, Joyal worries about their visible role in the legislative process is being slowly diminished. A 2002 law required only two Royal Assents had to be done in Parliament each year. In addition, there hasn’t been a Speech from the Throne since 2015 as the government has had only one session in the last four years. Joyal is concerned that, as the GG’s legislative role is reduced, that in turn places more pressure on their public personas. And, as one person said, viceregals shouldn’t be celebrities, to go out of fashion in a whim. They should be constants, like the Queen herself.

Journalist Dale Smith, who talked about behind-the-scenes officials of the Crown, makes the case for crucial but more bureaucratic changes, including reinstating the viceregal appointments commission created by Stephen Harper disbanded by the Trudeau government. The commission, a combination of permanent federal officials and ad-hoc members from the province where the appointment was to be made, used to winnow names down to a shortlist from which the PM would choose. “It professionalized appointments,” Smith explains, and “provinces got a sense of ownership and buy-in.” Smith also suggests reviving the office of Canadian secretary to the Queen, put “under review” after Kevin MacLeod retired in 2017. Royal tours are now fronted by Canadian Heritage, but Smith argues that the Canadian secretary position would strengthen the monarchical connection in Canada, especially by planning for looming milestones, including the Queen’s platinum jubilee in 2022, when she will be 96. Left unsaid are the tours that will happen after…the inevitable.

Then there is the topic that was raised again and again during the conference: Brexit, and its impact on Elizabeth II. “The Brexit debates have certainly brought the question of reserve powers to the fore in the U.K.,” says Lagassé, “This was unexpected, given efforts to keep the Queen as far from politics as possible.”

“What is happening in Britain is outside the bounds of what was ever conceived,” said Anne Twomey, one of the world’s leading experts on the Crown. The chaos that is Brexit has created a bizarre situation where the prime minister (the outgoing Theresa May) didn’t have the confidence of Parliament yet continued in her role. And that upside-down reality led to speculation that pro-Brexit politicians would ask the Queen to prorogue Parliament (end the current session) so as to force a no-deal exit from the European Union, blocking MPs from crafting an alternative.

“Brexit has fundamentally breached the rules of responsible government,” believes Twomey, a professor of constitutional law at the University of Sydney. And that raises the question, “Is the prime minister still responsible if [he or she] shuts down government with prorogation?” For in Twomey’s view, if there is no responsible government, then the Queen could refuse the request—though she thinks it’s likely that the Queen would not do so. On display is the outlandish fight between the will of Parliament versus the will of ministers, with the Queen and her powers being dragged into the morass.

The Institute for the Study of the Crown in Canada will continue its work: its next conference should be in two years. As for the Queen, there is a term in Canadian law, “Demise of the Crown,” which deals with the death of a monarch. It may mark the end of the era, but its experts also hope for a time of renewal.