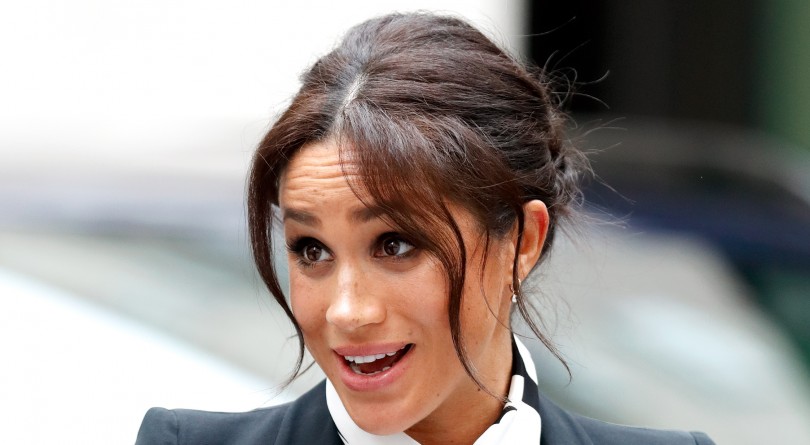 Josh Feldberg’s dive into the divisive world of royal social media began after he read a story detailing “how royal correspondents were under attack,” he recounts from London. In particular, the journalists who write about the royals for major British outlets such as the Telegraph and the Express were finding themselves under assault on social media for virtually anything they wrote about Meghan Markle, now the Duchess of Sussex.

Accusations of racism, nativism and bullying were being flung with abandon on Twitter. “At least one of my colleagues has called in the police after threats were made to relatives; another was told she deserved to have acid thrown in her face,” Richard Palmer of the Daily Express wrote last July. “We have all faced unpleasant and unfounded accusations of racism towards Meghan.”

Feldberg was curious. He’d never thought about royals as a hotbed for online trolling. But as the the head of digital at 89up, a European consulting firm that has done social media research for a ground-breaking British parliamentary committee investigation into disinformation and fake news, he was the right person to see if there really was anything suspicious in the Meghan Markle Twitter community. His findings were first reported in the Telegraph by Camilla Tominey and Hannah Furness, the paper’s royal correspondent. Tominey, a veteran royal reporter, has been the focus of what 89up called an “orchestrated attack by this network” he discovered.

READ MORE: Meghan Markle ‘does a Diana’ and commits a royal sin

“The whole thing is a bit insane, really,” Feldberg tells Maclean’s. Using data tools and software to track keywords such as “Duchess of Sussex” and hashtags including #Markle, he and his colleagues were able to extract relevant tweets, then analyze them for interconnections. With 89up CEO Mike Harris, Feldberg detailed their analysis in a report, “Is there a Duchess of Sussex bot network?” 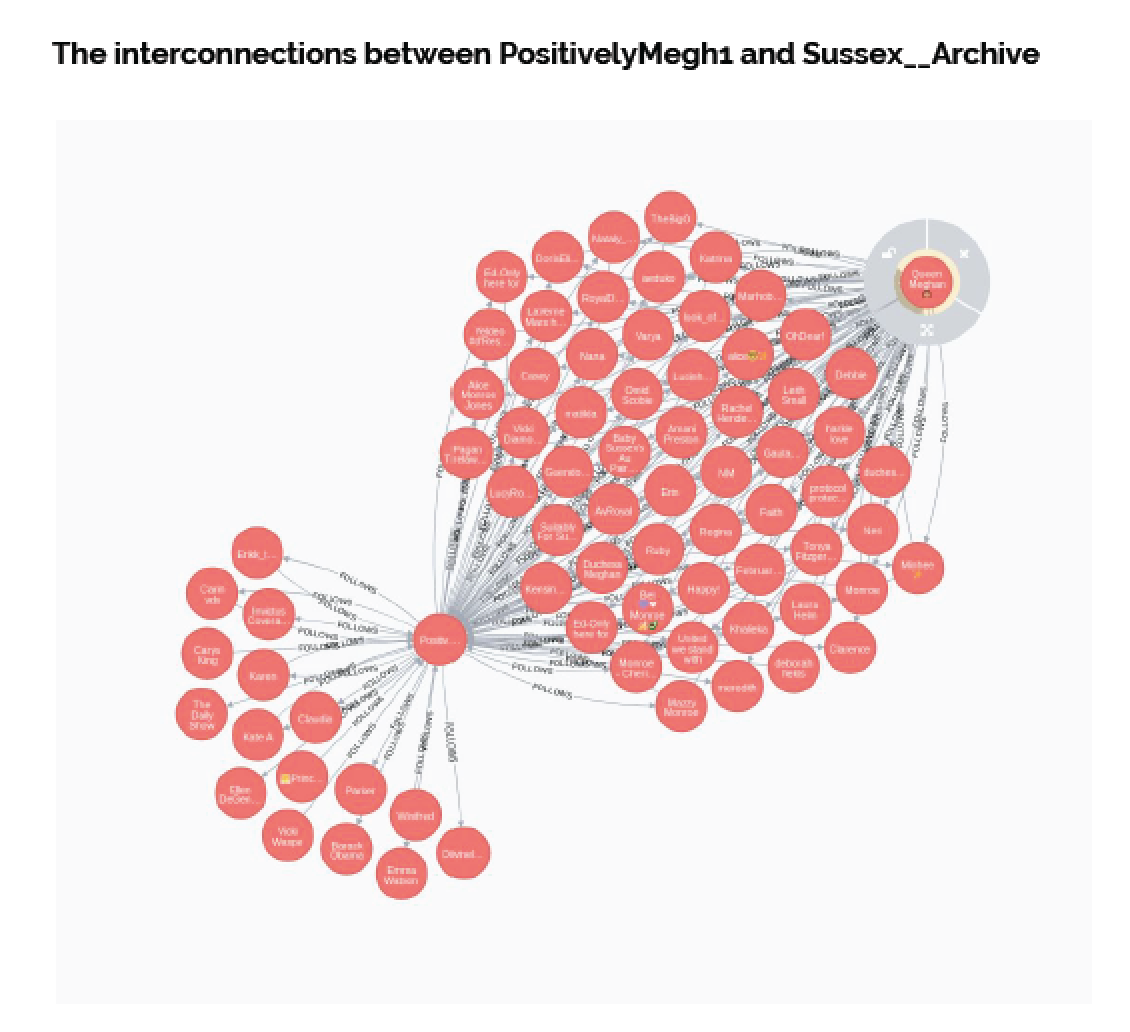 89up found “1,103 highly-connected Twitter accounts in a network who share content about the Duchess of Sussex obsessively.” While very few of those accounts appear to be entirely automated—classic bot accounts—Feldberg’s report found that “many have unusual features, suggesting there could be collusion or automation behind some of the accounts.” Many appear to be cyborgs—part-automated, part-human accounts that automatically retweet like-minded messages and also respond to keywords and phrases. One person could run multiple cyborg accounts, making it hard for a casual user to separate real from fake accounts.

Anonymity is a common feature of accounts in the Meghan hive. While royal correspondents and most major royal watchers have verified Twitter accounts, these fake accounts don’t have real profile photos or names. They often don’t have a large number of followers, but they do have lots and lots of interconnections with each other. “They are very heavily connected,” Feldberg explains. “They very much follow each other. It’s a dense network. They retweet each other a lot; the vast majority of tweets are retweets.”

Feldberg usually sees such suspicious networks in political social media. “It’s just the first time I’ve seen it with the royals,” he says. 89up’s analysis appears to confirm what many full-time royal watchers have suspected, and have been quietly talking to each other about, in recent months—that there is co-ordination behind the “pro-Meghan” attacks. Write about fashion—get attacked. Write about the staff turnover among Harry and Meghan’s staff—batten down the hatches. It’s a disturbing trend that has been growing in intensity and vitriol recently.

In November, Maclean’s wrote about the wars between stans (a combo of stalker and fan) of Meghan and her sister-in-law, Kate, Duchess of Cambridge, that had turned social media into a cesspool of hatred. Even then, the coordination among Meghan fans was noticeable.

“I have witnessed what amounts to be roving Twitter gangs that find a tweet/blog post about Meghan and kind of rally the troops and stoke up the fires and suddenly you have a hail storm of abuse flowing at you,” explains Jane Barr, who runs the From Berkshire to Buckingham fashion site, which focuses on Kate. “For me, it is very frustrating to write a nuanced analysis and have people just take a black-and-white interpretation and run wild with it.”

Sometimes a story or tweet would be ignored for a few days, then, without warning, an avalanche of negative attacks would begin. One royal watcher went through 89up’s list of the top interconnected Meghan hive accounts and realized she’d blocked almost every one of them for abusive language.

The nastiness isn’t isolated to royal watchers. Even the royal family’s own feeds have been infected. The royal household took action, releasing social media community guidelines and reserving the right to block users whose comments are abusive, offensive or promote discrimination, among other rules.

In the 89up report, a sample of 3,000 tweets from that Meghan hive of 1,103 accounts revealed that most were from the United States, with Britain and Canada a very distant second and third. But Feldberg points out that anyone can put fake location information on their profile, noting that Curaçao is fourth on the list, followed by Zimbabwe, which are hardly two hot spots of royal Twitter action: “If you’re going to hide, you would put Zimbabwe” on your profile.

Feldberg isn’t discounting the possibility that some super fans might be caught up in the Meghan hive. As he wrote in the report, “It is not impossible that there is just a fanatical community of people online who are tweeting all day content about the duchess, but the scale of the community and the amount of content they are sharing should make us suspicious.”

The big question is why. Feldberg isn’t sure, though the suspicious nature of the linked accounts suggests a more nefarious reason. As he wrote in the report, “The prevalence of strange Twitter user names and the overlap between accounts that tweet primarily about politics but also tweet extensively about the duchess could point to an orchestrated campaign to manipulate public opinion by an organization or state.”

RELATED: The Meghan Markle pendulum swings to the negative

He wonders if they could be building up followings over time, engaging with real people across the political divide, then, when they want to focus on a particular campaign (political or social), they change the subject to the one they really want to focus on. It’s a classic bot/troll disinformation and destabilization strategy that has been seen before, particular from Russians, who are attacking institutions across the West.

A “well-coordinated network of Russian troll accounts” that two professors at Clemson University monitored in the lead-up to the 2018 U.S. election were “much subtler, often more palatable and always seemingly more organic” than most thought, they wrote in the Washington Post. “They are remarkably astute in exploiting questions of culture and identity and are frequently among the first to push new divisive conversations.” And they can be quite successful in tailoring messages to different target audiences. In June 2017, a tweet by a troll account participating in Black Lives Matter gained more than two million likes and retweets for a subtle dig at Melania Trump: “Daily reminder that the most educated First Lady in American history is a black woman with two Ivy League degrees from Harvard and Princeton.”

While it’s too early to know the ultimate aims, discrediting the media and national institutions, such as the monarchy, would be a logical outcome of such campaigns. And there is a tantalizing hint in the 89up report: “The fourth most shared account, Lewisno1fan, is a left-wing fan of Lewis Hamilton who has posted no fewer than 1,596 tweets about the duchess in the last year. This account in recent weeks has been downplaying the anti-Semitism crisis in the Labour party, yesterday was defending controversial Labour MP Chris Williamson, frequently shares tweets from Russia Today the state broadcaster and has shared Skripal conspiracy theories” regarding the poisoning by Russian agents of dissident Sergei Skripal and his daughter, Yulia, in Britain.

Time is needed to figure out more characteristics of the network Feldberg found. He is curious how that network of 1,103 Meghan accounts will evolve and change, especially as Britain may be heading towards an election or another referendum. “In difficult times, it could be an interesting test case.”