Harry and Meghan’s wedding had descended into PR nightmare in the home stretch, but Prince Charles’s timely intervention puts things back on track 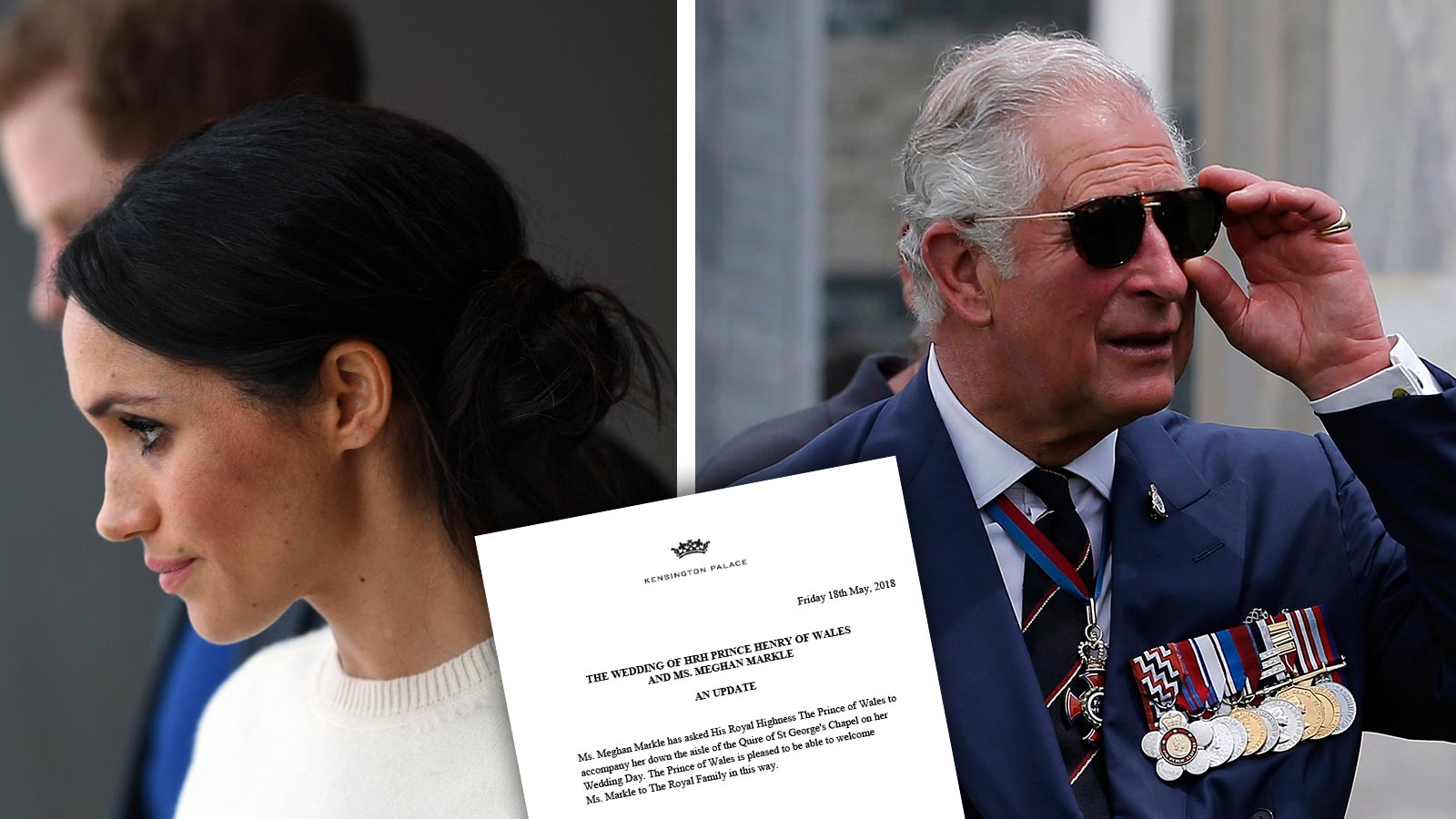 Meghan Markle, left, will be escorted down the aisle for her wedding to Prince Harry by the groom’s father, Prince Charles, right. (Andrew Parsons/Getty; Costas Baltas/AP)

Friday’s Twitter announcement was two lines long: “Ms. Meghan Markle has asked His Royal Highness the Prince of Wales to accompany her down the aisle of the quire of St George’s Chapel on her wedding day. The Prince of Wales is pleased to be able to welcome Ms. Markle to the royal family in this way.” And with that, Prince Charles saved the day, just 24 hours before his younger son, Prince Harry, and Meghan Markle are to marry.

An update on the #RoyalWedding: pic.twitter.com/wfJ6ZFyzHi

The last week has been a lingering PR disaster for Harry and Meghan and their Kensington Palace household as the pay-for-photos scandal involving her father, Thomas Markle, degenerated into a week-long saga of increasingly bad headlines, after the Los Angeles-based gossip site TMZ revealed that Meghan’s father, who lives alone in Mexico, had called off his participation in the wedding after being embarrassed by the paid-photo revelations, then said he wanted to go, then went into hospital for heart surgery, and so would, finally, not be able to attend the Windsor wedding.

MORE: Who’s to blame for the Thomas Markle fiasco?

“Media tactics unravel in run-up to big day,” from the BBC was one of the less hysterical ones. Its royal correspondent, Jonny Dymond, pulled no punches, writing, “How has Kensington Palace, the office and residence of Prince Harry, which has rolled out the royal wedding plans and strategy over the past few months, dropped the ball so spectacularly in the last four days?”

He went on to say what every royal watcher had been thinking:

“With the entertainment website TMZ apparently having a hotline to the father of the bride, the palace’s near-monopoly on information has been broken. TMZ has functioned as a rival press office, issuing apparently well-sourced bulletins on Thomas Markle’s health and state of mind that left the palace blindsided. The response to 24 hours that entirely contradicted the previously stated plan for the wedding? No comment. Who will walk the bride down the aisle? No comment. What on Earth is going on? No comment.”

That vacuum was filled by huge quantities of media speculation. Chunks of the blame is being laid at the feet of Prince Harry and his office at Kensington Palace (where William and Kate’s staff also work), for they have controlled every aspect of the wedding, reportedly shutting out the large, experienced households at Clarence House (for Charles and Camilla) and Buckingham Palace (for the Queen and other senior royals.)

MORE: Is Thomas Markle going to the royal wedding? Final answer: No.

“Why Meghan, Harry and the clueless palace may come to rue the day they left the backstabbing, money-grabbing Markles out in the cold and turned this wedding into a right royal tacky mess,” screamed a Piers Morgan column in the Daily Mail. He blamed the extended Markle clan—“a bunch of repulsive PR-crazed Kardashians”—as well as Thomas Markle—“caught with his greedy snout in the paparazzi trough, cashing in on his daughter’s wedding with staged photos that were sold around the world”—and Harry’s staff at Kensington Palace—“Why on earth didn’t Kensington Palace either send people to Mexico to advise him, or fly Mr. Markle to London?”

The result was a week of increasing distress for fiancée Meghan, who was unable to reach her father immediately after he initially called off his attendance, then had to endure his surgery, all while knowing the questions being raised about how such a foreseeable situation was allowed to get so out of hand.

WATCH: Everything you need to know about Harry and Meghan’s big day

Now, a day before the wedding, most of those negative stories are shelved because of one press release announcing that Charles was pleased to accompany Meghan and welcome his daughter-in-law into his family this way. That Prince Charles didn’t hesitate is the measure of the man. When Sophie Winkleman, wife of a distant cousin, was seriously injured in a car accident, Charles stepped up, in a “magnificently practical” fashion. “Prince Charles sensed correctly that everything would be chaos at home, so he asked his cook, instead of taking care of him, to take care of us,” she told Hello. “So, our lunches and dinners were cooked at Clarence House then delivered for weeks on end while I was in hospital and then still disabled at home.”

MORE: The royal wedding, by the numbers

And this isn’t the first time Charles has escorted a bride. In 2016, he offered his arm to Alexandra Knatchbull, a distant cousin and goddaughter of his late first wife, Diana, at her wedding. Now, on Saturday, he’ll do that again. And in doing so, he smooths over a scandal. Prince Charles did his duty, just as he’s always done. This time, however, the accolades were loud and public. “Prince Charles saves the day,” shouted the Express. Even Piers Morgan was full of praise, tweeting “Blimey! Prince Charles will walk Meghan down the aisle. Good for him coming to the rescue.”

No question, the move is a masterstroke: it puts the royals back in the driver’s seat—and the lens squarely on Prince Charles, the future king.

MORE ABOUT THE ROYAL WEDDING: