Prince Harry and Meghan Markle vs. the royal family

Who's taking sides? Britons are divided on the couple's bold move, but a majority think there should be a financial penalty. 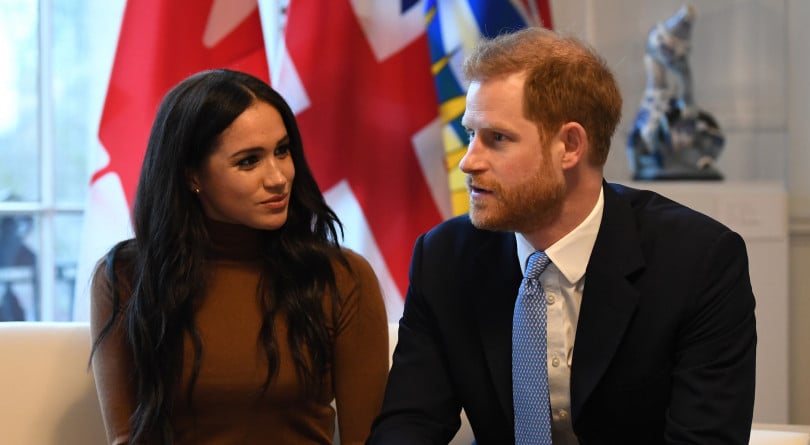 LONDON, UNITED KINGDOM - JANUARY 07: Prince Harry, Duke of Sussex and Meghan, Duchess of Sussex gesture during their visit to Canada House in thanks for the warm Canadian hospitality and support they received during their recent stay in Canada, on January 7, 2020 in London, England. (Photo by DANIEL LEAL-OLIVAS - WPA Pool/Getty Images)

Familial splits are rarely clean, friendly affairs. They may begin that way but often devolve into acrimonious, complicated messes. Facts are viewed through prisms of personal beliefs that can make it hard to see the other’s point of view. It happens when couples break up, when chums grow apart and when royals decide to upend a system that has held together for decades.

Right now, Harry and Meghan’s camp are squaring off against that of the other royals to shape the narrative of the biggest scandal to hit the House of Windsor since, perhaps, the death of Diana, Princess of Wales in 1997. The knives aren’t just sharpened, they are landing blows.

On Jan. 6, the day Meghan and Harry flew into Britain after a six-week break on Vancouver Island, the Sussex press team announced that, the next day, Meghan and Harry would visit the Canadian high commissioner at Canada House to “thank them for the warm Canadian hospitality and support they received during their recent stay in Canada.” The unusual nature of the engagement wasn’t lost on anyone. “It is absolutely bizarre to come back from a super private, super exclusive vacation and make a formal visit to the Canadian embassy to thank ‘Canada’ for its hospitality,”wrote Jane Barr on her From Berkshire to Buckingham website. “The reason it is bizarre is that they… did not publicly tour the country, greeted as they went by throngs of well-wishers (for which a formal thank you would seem gracious). They were acting as private people.”

Aside from that, the Jan. 7 event was uneventful. Meghan talked about how they’d enjoyed the beauty of Vancouver Island. “To see Archie go ‘ahh’ when you walk by and just see how stunning it is, so it meant a lot to us,” she said, without revealing that their baby was still in Canada in the care of a nanny and Meghan’s close friend, Jessica Mulroney, a stylist as well as wife of TV host Ben Mulroney.

The next day, after 6 p.m. in London, as royal officials were heading home, the Duke and Duchess of Sussex told the world they were stepping back from their roles as senior royals “to carve out a progressive new role.” At the same time, they unveiled a sophisticated website dedicated to outlining how they see the new system operating, essentially a laundry list of their demands. Instantly, the Canada House engagement was transformed: by appearing in public the day before, Harry and Meghan had provided the media, with which they are in open conflict, fresh images of themselves to run next to stories about how they want to jettison their royal lives.

Blindsided, royal officials rushed back to work to deal with the fallout, issuing a terse statement that said discussions about the Sussexes’ changing roles were “at an early stage” and the issues were “complicated.” Soon came word from palace sources that, while the couple’s note gave the impression their action was done in collaboration with Harry’s family, in fact the Queen didn’t know the couple were going to release that statement and that the family was “disappointed” by their actions, effectively saying they’d gone rogue.

After that came a flood of revelations and support from both sides. Online, Jessica Mulroney backed her friend Meghan, posted a quotation on Instagram: “A strong woman looks a challenge in the eye and gives it a wink.”

Tom Bradby, the close friend of Harry and Meghan whose interviews with them in his documentary last fall showed a couple struggling with royal life, told People that they felt driven out by Prince Charles’ desire to slim down the monarchy from its current rota of 15 full-time working members to the monarch, heir and immediate family. “My impression is they’re pretty philosophical about it,”Bradby told Simon Perry. “[It’s] ‘We are making a break for independence and freedom here. You wanted a slimmed-down monarchy. There’s no place for us in it. We need to learn to live on our own. We want to get on and do that.’ ”

READ: Are Prince Harry and Meghan Markle moving to Canada?

He said that when Harry approached his family over the holidays about retreating from his current duties, he was asked to put his plan in writing, but Harry feared it would be leaked. Then, when Dan Wootton of the Sun reported on Jan. 8 that the Sussexes wanted to spend more time in Canada, Harry took that as confirmation of his fear, and “all bets were off,” Bradby stated. (Dan Wootton fired back on Twitter to say he had first approached the couple’s staff for comment 10 days before his story was printed and the Sussexes weren’t caught off guard by his story. As well, other reports maintain that their staff tried to dissuade them from issuing the message.)

On the other side came a veritable flood of revelations. Veteran royal writer Robert Jobson, with Jonathan Prynn, revealed in the Evening Standard that Harry “was told that while the Queen was happy to meet him, she would not discuss his wish list before he had discussed it in detail with his father” and that Prince Charles and Prince William “were only sent a copy of Harry and Meghan’s statement ‘10 minutes’ before it was released and without any further consultation.”

At the same time, royal aides tried to dampen Harry and Meghan’s fears that the hugely popular couple was being excluded from Charles’ plans, which have always been reported as including both his sons and their families: “I don’t think you could point to any evidence of them being forced out, or made to feel unwelcome,”one of them told Valentine Low of the Times. “The future of the monarchy always had the Sussexes very much at the heart of it, and perhaps still will, depending on what structures they arrive at,”

The media delved into every corner of the growing controversy, reporting that Prince Charles isn’t prepared to completely underwrite all of the couple’s demands for a new life (according to their website, 95 per cent of their official expenses are paid by profits from his Duchy of Cornwall) and that they are already discussing commercial projects to sustain their new roles.

On Thursday, the second full day of the saga, royal social media platforms wished Kate, Duchess of Cambridge, a happy 38th birthday, and touted Prince Edward’s success overseeing the Duke of Edinburgh Award scheme, which his father, Prince Philip, had created. On the same day, a YouGov poll revealed that the country was divided: while 45 per cent of Britons support Harry and Meghan’s decision to step back from their roles as senior royals, 63 per cent don’t think they should continue to receive money from the Duchy of Cornwall.

That afternoon, the palace told royal correspondents that Queen Elizabeth II wanted to cauterize the festering feud: “The Queen, the Prince of Wales and the Duke of Cambridge have directed their teams to work together at pace with governments and the Sussex household to find workable solutions. Expected to take days not weeks.”

Whether that’s possible is unclear. That same day, Meghan left London, returning to Archie on Vancouver Island. Harry, who has an engagement next week in Britain, is expected to follow soon, returning to the same place where they planned their bold move. Not long after, they posted images of their private visit to the Hubb Community Kitchen on the morning of that visit to Canada House. The photos showed the couple smiling and embracing the women who created a volunteer kitchen to support the community affected by the tragic Grenfell Fire. Meghan had created a best-selling cookbook with them, which raised funds to allow for an expansion of their culinary efforts.

Looking at that Instagram post, it was as if nothing had changed for the couple and the House of Windsor. Yet, in the space of what should have been a quiet week in early January, Harry and Meghan upended the Royal Firm, and everyone is left wondering how much damage will be inflicted before a truce is declared.