Prince Philip dead at 99: Reaction from Canada and around the world 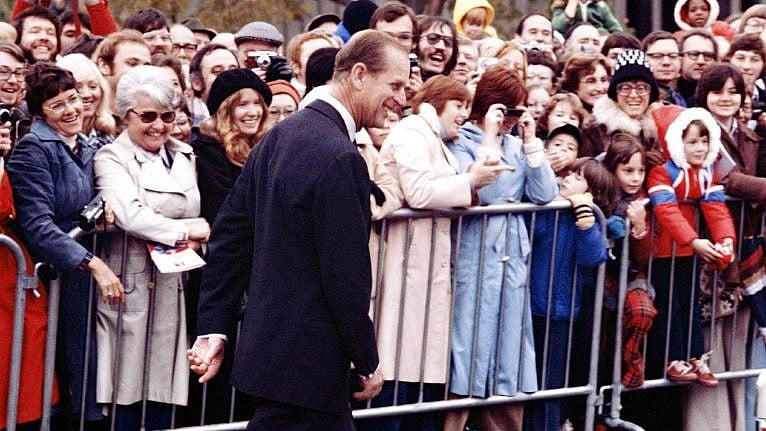 Prince Philip leaves a ceremony at the National War Memorial in Confederation Square in Ottawa on Oct. 15, 1977 (CP)

Prince Philip, the Duke of Edinburgh, was a well-travelled member of the royal family, with diverse interests and a vast range of patronages and personal connections—not least in Canada. In the minds of many people, he came to represent the institution of the monarchy almost as much as the Queen, herself.

No surprise, then, that Philip’s death drew reaction and remembrance from this country and around the world.

It is with deep sorrow that Her Majesty The Queen announces the death of her beloved husband, His Royal Highness The Prince Philip, Duke of Edinburgh.

His Royal Highness passed away peacefully this morning at Windsor Castle.

Further announcements will be made in due course.

The Royal Family join with people around the world in mourning his loss.

Condolences are pouring in from prominent figures in British politics and public life:

The United Kingdom has lost an extraordinary public servant in Prince Philip.

Prince Philip dedicated his life to our country – from a distinguished career in the Royal Navy during the Second World War to his decades of service as the Duke of Edinburgh.

I am saddened by news that the Duke of Edinburgh has died. I send my personal and deepest condolences – and those of @scotgov and the people of Scotland – to Her Majesty The Queen and her family. https://t.co/G7ocXXOH2U

From across the Commonwealth:

My thoughts are with the British people and the Royal Family on the passing away of HRH The Prince Philip, Duke of Edinburgh. He had a distinguished career in the military and was at the forefront of many community service initiatives. May his soul rest in peace.

Statement on His Royal Highness The Duke of Edinburgh. pic.twitter.com/6kq6Lg7cLp

In Canada, which the Queen and Prince Philip visited many times, leaders and others posted countless tributes:

“It was with deep sadness that I learned of the passing of The Duke of Edinburgh.

“A man of great service to others – first as a decorated naval officer and later as a dedicated leader in the areas of community engagement and philanthropy – the Duke always sought out the best in people and challenged them to strive for greater heights.

“The global program that bears his title – the Duke of Edinburgh’s Award – has helped empower millions of young people from all backgrounds to realize their greatest potential, and is but one example of his contributions to the social fabric of this country and the world. He was also the patron of more than forty organizations in Canada, including the Canadian Aeronautics and Space Institute and the Outward Bound Trust. During his last visit to Canada in April 2013, the Duke was named the first-ever Extraordinary Companion of the Order of Canada by the Governor General of Canada.

“Prince Philip was a man of great purpose and conviction, who was motivated by a sense of duty to others. He will be fondly remembered as a constant in the life of our Queen – a lifelong companion who was always at her side offering unfailing support as she carried out her duties.

“A family has lost a beloved husband, father, grandfather, and great grandfather. The thoughts of Canadians are with Queen Elizabeth II and the members of the Royal Family as they mourn such a significant loss.”

It was with deep sadness that I learned of the passing of The Duke of Edinburgh today. A man of great purpose and conviction, who was motivated by a sense of duty to others, Prince Philip contributed so much to the social fabric of our country – and the world.

Richard Wagner is the chief justice of the Supreme Court of Canada. In his role of “Administrator” until the position of Canada’s Governor General is filled, he issued this statement:

“Throughout his long life, His Royal Highness The Duke of Edinburgh devoted himself to the people of the Commonwealth and of Canada. He stood by Her Majesty The Queen for more than six decades, a constant and reassuring presence. He valued community, duty and service. He believed in wildlife conservation, volunteerism and supporting young people. A tireless world traveller, he showed that Canada held a special place in his heart by visiting this country more than any other.

“The Duke of Edinburgh leaves a legacy that has touched so many, especially the hundreds of thousands of young participants in the Duke of Edinburgh Awards program. This program, which he established in Canada more than 50 years ago, has celebrated and encouraged service and excellence among young people across the country and around the world. His Royal Highness understood we must offer the next generations opportunities to succeed, and he believed in the power of youth to change the world for the better.

“As a sign of our enduring respect, His Royal Highness was made the very first Extraordinary Companion of the Order of Canada in 2013, a fitting tribute for an extraordinary man. He was also invested as Commander of the Order of Military Merit, an honour that speaks directly to his own military past and his commitment to our women and men in uniform.

“His Royal Highness devoted his life to his family and to fulfilling his unique role in our constitutional monarchy. Whether speaking with young Canadians about their hopes and dreams, presenting colours and meeting troops at military bases and events, or representing the Crown at state occasions, Prince Philip constantly showed his commitment to Canada. He was a great friend of this country and he will be dearly missed. On behalf of all Canadians, I offer my deepest condolences to the members of the Royal Family.”

An advocate for young people, volunteerism, wildlife conservation and more, the Duke of Edinburgh was a great friend of Canada. Our deepest condolences to Her Majesty The Queen and the members of the Royal Family. pic.twitter.com/0oTDaNugOc

And other Canadian political leaders spoke up:

HRH Prince Philip embodied a life of service and the strength of the United Kingdom and Commonwealth are part of his legacy. Sincere condolences to Her Majesty on behalf of her Loyal Opposition in Canada. 🇬🇧🇨🇦 pic.twitter.com/s9LyUivkLa

So many families have experienced the loss of a loved one this past year.

I extend my condolences to Prince Philip's family during this difficult time.

On behalf of all Ontarians, we send our deepest condolences to Her Majesty the Queen and the entire Royal Family. Prince Philip was a devoted husband, father, war hero and public servant and he will be missed by many around the world. https://t.co/MFGZHZqTA4

Other royal families in Europe weighed in:

Condolence messages from other royal families to the Queen.

Prince Philip, as a great-great-grandson of Queen Victoria was related to virtually all of Europe’s royal families https://t.co/VukQoGK8Sx

Also, in an early entertainment industry reaction, the companies and team behind the hit TV streaming series The Crown reacted to the royal’s death.

“Netflix, Left Bank Pictures, Sony Pictures Television and the production team on The Crown are deeply saddened to hear of the death of The Duke of Edinburgh,” they said in a statement. “Our thoughts are with the royal family at this sad time.”

In his interactions with the public, the prince was known for his verbal gaffes, but also for his wry wit. Here’s Tony Dean, a Canadian senator:

@CBCMorningLive here’s a personal story about the #dukeofedinburgh: I started my working life as a millwright in a tire factory in the UK. As an apprentice I was fortunate to be enrolled in the Duke of Edinburgh’s award scheme, eventually earning the gold medal.

The loss of Philip was felt in the sporting world, too. Jose Mourinho, the legendary soccer coach who currently helms Tottenham Hotspur, seemed almost verklempt:

Jose Mourinho sends his condolences to the Royal Family as news of Prince Philip’s death breaks during his press conference ❤️ pic.twitter.com/uXglmUnaUC

Today, at the news of the death of the Duke of Edinburgh in his one hundredth year, the nation and the Commonwealth…