Patricia was a working princess and artist who supported the suffragette movement. 100 years ago, she married for love. 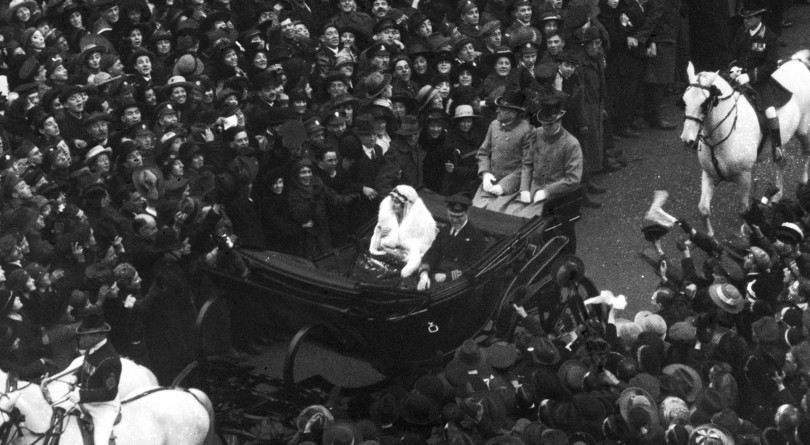 Princess Patricia of Connaught, driving from Westminster Abbey, with her husband Commander Alexander Ramsay, after the ceremony. (Photo by PA Images via Getty Images)

Princess Patricia of Connaught was the ultimate princess—beautiful, intelligent and artistic. The granddaughter of Queen Victoria was courted by kings and grand dukes, yet carved her own path in life and love. Today, Patricia is largely forgotten except in her adopted home of Canada, where one of its most famous regiments bears her name. Yet in many ways, she was the first modern princess. Her life, and her marriage 100 years ago, have echoes today in those of the most famous royal women: Kate, Duchess of Cambridge, and Meghan, Duchess of Sussex.

While many royal females of her era stayed largely out of the public eye, Patricia “was a working princess,” explains Alexandra Kim, a former curator for Historic Royal Palaces who has been interested in Princess Patricia for years and now works in Toronto. “It was a role she took on and did well.” Her mother’s precarious health meant the unmarried Patricia often undertook engagements with her father as the Duke of Connaught travelled throughout Canada during his tenure as governor general from 1911 to 1916. 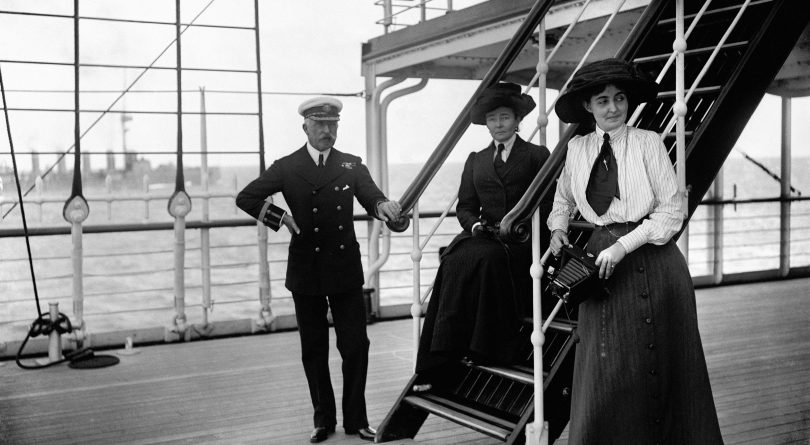 In addition to supporting charities and organizations, and being a talented artist—her paintings were described as “very modern” by a bemused royal cousin—the athletic royal loved spending time outdoors. She skated at Rideau Hall, rode in the Rockies, golfed and played field hockey. Like today’s royals, her every move was actively tracked and recorded by the media. In 1912, when Dawson City invited the Connaughts to visit an exposition, the focus of a story in the New York Times was Patricia, with the duke and duchess getting second billing.

Her easy manner often contrasted sharply with the stuffy etiquette so prevalent at the time. She was so popular that Canada put her portrait on its $1 bill in 1917, fittingly on March 17, her 31st birthday. She was only the second solo, non-regal woman on Canadian currency (after the Countess of Dufferin in 1878). Her popularity was not confined to Canada. Two years later, Madame Tussauds in London advertised having a “lifelike portrait model” of Patricia on display. 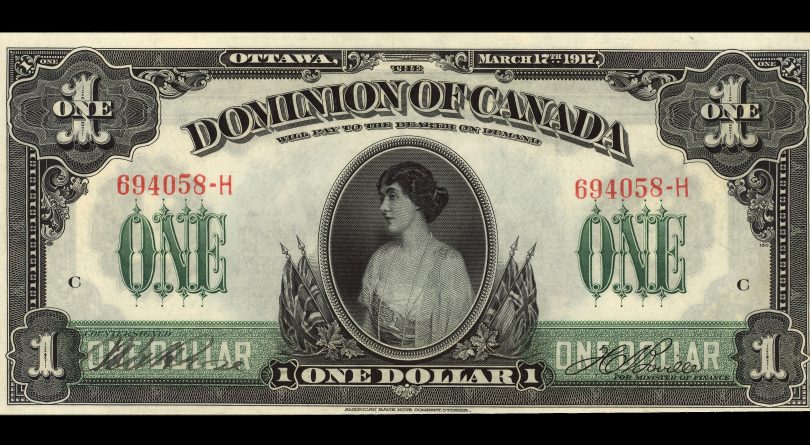 Patricia wasn’t afraid to challenge the status quo. In the midst of a contentious international campaign to get the vote for women, Patricia pointedly supported the cause by appointing a prominent suffragette as a lady-in-waiting. “Princess Patricia refuses to obey order of queen,” blared a front page headline of the Toronto Daily Star in 1913 when she tried to bring her aide to a country house party where the disapproving Queen Mary would be present.

READ MORE: Meghan Markle ‘does a Diana’ and commits a royal sin

Perhaps nothing is more emblematic of how Patricia created the path that so many of today’s royals walk than her wedding, which took place 100 years ago on Feb. 27, 1919. It was the fairy tale that so many today expect from royal nuptials, making it “easy for 21st-century women to connect with,” Kim notes.

Most famously, Patricia married for love. Over the years, rumoured suitors included King Alfonso XIII of Spain, King Manuel II of Portugal, Grand Duke Michael of Russia and Adolphus Frederick VI, Grand Duke of Mecklenburg-Strelitz. The strong-willed Patricia turned them all down, opting to wait until she could marry the love of her life.

In December 1918, a few weeks after the end of the Great War—which had laid waste to many of the thrones of her relations—King George V and his wife Queen Mary announced that they had “received the gratifying intelligence of the betrothal of Her Royal Highness Princess Victoria Patricia of Connaught, Their Majesties’ Cousin, to Commander the Hon. Alexander Ramsay, R.N. to which union the King has gladly given his consent.”

Her choice for fiancé was the third son of the 13th Earl of Dalhousie. They’d reportedly known each other since 1908, then three years later, their romance was cemented in Ottawa, where the career Royal Navy officer was aide-de-camp to her father. Though an aristocrat, his commoner status and lack of title were apparently too much for her family, especially given kings were vying for her hand. It took years before they finally won the right to be married; by then he was 36, she was 32. 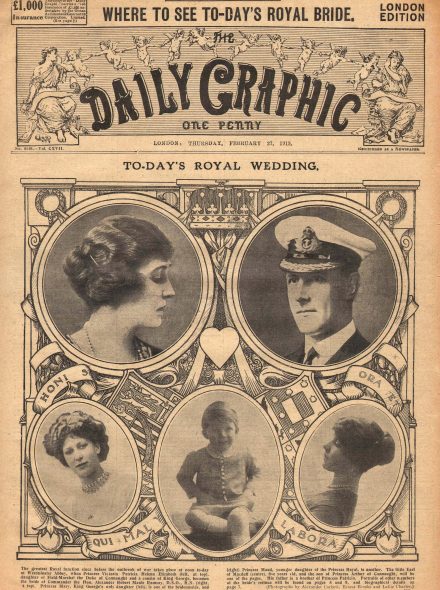 Even more romantically, Patricia decided to give up her royal title. Four days before the wedding, King George V signed a warrant granting his cousin “his royal licence and authority” that she could “relinquish the style of Royal Highness and the title of Princess of Great Britain and Ireland” upon her marriage.

So that she wouldn’t be a plebeian Mrs. Ramsay—a royal bridge too far—the monarch announced at the same time she would be known as Lady Patricia Ramsay. It was taken as “a sign of the new spirit of national union which the war and its perils, in which the bridegroom played such a gallant part, have created among the people,” wrote the Illustrated London News. (She may have regretted her decision; when that other royal rebel, Princess Margaret, was contemplating doing the same, Patricia warned that “things are never quite the same,” according to royal author Robert Golden.)

The couple and the wedding captured the imagination of a war-weary populace. In what the Times called “an almost embarrassing display of good will,” Princess Patricia eschewed the typical private wedding in a royal chapel and established the modern tradition of a public wedding by choosing Westminster Abbey, becoming the first royal to wed there since King Richard II to Anne of Bohemia in 1382. After being wed in front of 3,000, the couple braved a cold, wet winter day as they drove in an open carriage through London. Tens of thousands crowded their procession route for a glimpse of the couple. At times the crowds were so thick they had to be held back by soldiers of her regiment, the Princess Patricia’s Canadian Light Infantry (PPCLI).

Just as Meghan Markle and Prince Harry invited charities and organizations with which they had relationships to their wedding last year, Princess Patricia invited her cherished PPCLI to take a prominent part in her own big day. The PPCLI was created by businessman Hamilton Gault a few days after war was declared in 1914. It was one of the last privately funded regiments in the British Empire. Patricia was involved from the very beginning, designing and creating its original Colour, the Ric-a-Dam-Doo, the only colour carried into action during the Great War.

The troops were “her boys.” “She visited them in hospital, she has sent them gifts, she has received from them messages and even letters,” the Illustrated London News explained in its wedding issue. Not only did the regiment provide the honour guard, but it presented her with her bridal bouquet, tied with regimental colours.

RELATED: The Meghan Markle pendulum swings to the negative

Like so many parts of her nuptials, her Venetian-style dress, a softly draped silk velvet gown with silver embroidery and a historic veil, was very modern for the time. “It sets the tone for the next decade or so of royal weddings,” Kim notes. “She was of the time but not leading” in fashion, like Kate Middleton, who wore a modern yet classic gown to her own Westminster Abbey wedding in 2011.

For all the royal traditions Patricia introduced, her relationship with the PPCLI is the most intimate. Though Lady Patricia Ramsay largely retreated from public life after her marriage, she was active in the regiment’s life, remaining its colonel-in-chief until her death in 1974. Fittingly, her family presented her wedding dress to her beloved regiment. Now, in time for the 100th anniversary of her wedding, it has just been put on display in the regimental museum in Calgary, reinforcing a connection that can never be broken to a modern princess who broke so many rules, and won.