Queen Máxima of the Netherlands is Europe's most interesting royal

As the Dutch royals visit the U.K., the popular queen with the lively, worldly spirit might be able to pass on some tips to Britain's duchesses 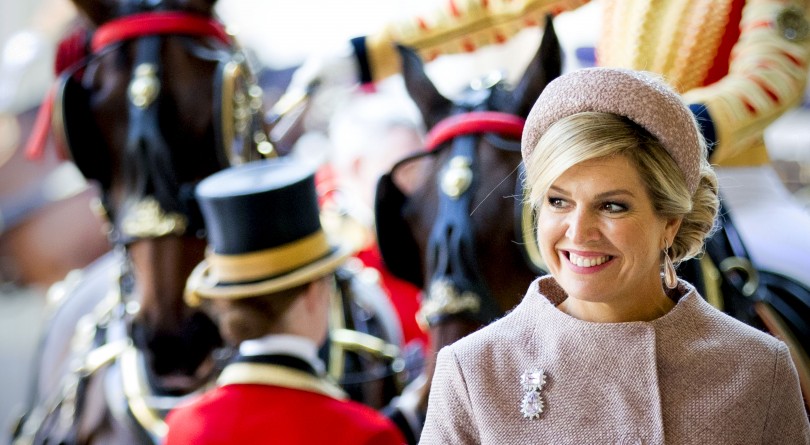 Queen Maxima of The Netherlands arrives at Buckingham Palace on Oct. 23, 2018 in London, United Kingdom. She and King Willem-Alexander are on the first state visit to the U.K. from royals from the Netherlands since Queen Beatrix and Prince Claus visited in 1982. (Patrick van Katwijk/Getty Images)

There are stilted and stiff royals who do what is expected, but without being known for their sense of verve and energy; the isolated Japanese royal family, as well as those in Luxembourg and Liechtenstein, come to mind. And then there are royals like Queen Máxima of the Netherlands.

The 47-year-old has a potent combo of charisma and intelligence, mixed with a strong work ethic and a regally down-to-earth nature. She’s wildly popular in the Netherlands, even though her transformation from commoner to crown princess to queen hasn’t been an easy one, coping as she has with unrelenting media and public scrutiny and scandalous relatives. She’s still able to balance a busy schedule of royal and charitable work with raising their young daughters in as much privacy as possible, all while wearing a fashionable wardrobe so essential for royal women today. And as she accompanies her husband, King Willem-Alexander, on their first state visit to Britain today, the grand, formal ceremonies of the two-day visit are set to showcase her vivacious personality, her ability to wear more diamonds than virtually any other queen other than her hostess, Elizabeth II—and display to a new audience how she is the most interesting royal in Europe.

Like virtually everyone in her generation of royal spouses—including Kate, Duchess of Cambridge, and Meghan, Duchess of Sussex—she’s a commoner. And she’s one with a remarkable story: Máxima Zorreguieta was an Argentine-born economist working at Deutsche Bank in New York when she met the heir to the Dutch throne at a party in Spain in 1999. There was instant attraction. But their nascent romance was nearly scuttled when the media realized her father had been a minister in a brutal military junta government during Argentina’s infamous Dirty War years.

The couple persevered, even with the public’s disapproval. Máxima took a job in Brussels so the two wouldn’t be limited by a transatlantic relationship, and she learned to speak fluent Dutch. Still, the public was unsure of her suitability, and worried that scandals involving her father would eventually envelop the royal family. Finally, two years later in 2001, their engagement was announced, with Willem-Alexander’s mother Queen Beatrix standing by the couple to publicly give her blessing, proclaiming Máxima as an “intelligent modern woman.” (It’s no surprise; Beatrix knew a thing or two about having a controversial spouse, since her own groom, Klaus von Amsberg, had been in the Hitler Youth and was conscripted into the German army. Violent protests greeted the couple on their wedding day.)

Still, Máxima’s father was barred from her wedding. “As a daughter I find it terrible that my father won’t be there,” she said at the time, “but that’s the way it is, and I understand the feelings of the Dutch on the question.” He also didn’t attend other major royal events, including his son-in-law’s accession to the throne in 2013 following Beatrix’s abdication. She and Willem-Alexander regularly took their three daughters, Amalia, Alexia and Ariane, to privately visit her family in Argentina.

Slowly but surely, public opinion changed, especially as she plunged into Dutch life, casually yet confidently adopting traditions and customs as her own. It helped that her warmth was a refreshing change from her beloved yet reserved mother-in-law, too. “She is exotic, she has passion and sparkle and flamboyance and she doesn’t try to be distant like Beatrix,” Han van Bree, a Dutch royal historian, explained to the BBC in 2013, when Willem-Alexander and Máxima became the nation’s king and queen. “We love her for that, people can feel the authenticity.”

She’s worked hard for that approval. While most media attention focuses on her stylish fashion choices—which include a staggering array of flamboyant hats that mirror her personality—Máxima doesn’t shy away from tough or controversial topics, such as the integration of immigrants into Dutch society. And it was no coincidence that she attended an international gay rights conference shortly after becoming queen in 2013.

Last month, she attended the United Nations in New York in her capacity as the secretary-general’s special advocate for inclusive finance for development. Since 2009, she has travelled extensively to push for firms to improve access to safe, inexpensive financing and bank services that are currently off-limits to some 1.7 billon people around the world.

She’s also credited with relaxing her husband Willem-Alexander who, like Prince William and Harry, had a contentious relationship with the media. Her spontaneity softened his reputation of being an awkward yet hard-drinking, jet-setting playboy. She failed, however, when it came to getting him to salsa. “I keep trying to push him,” Máxima said in a 2001 interview. “His hips are a little rigid.”

There’s little chance for salsa dancing during their state visit to Britain: It is filled with carriage processions to Buckingham Palace, a tiara-laden state dinner with the British royal family, as well as teas with politicians. But there is also time for projects closer to their hearts and interests. On Oct. 24, they visit a south London project called Pop Brixton. Housed in shipping containers on disused land, it provides space for local businesses and social enterprises, such as the organization Bounce Back, which helps ex-offenders find training and employment.

Like all royals on thrones today, she and Willem-Alexander walk a fine line, balancing centuries-old tradition—including charitable events like those undertaken in London—with the needs of the modern era. Sometimes, those two meld with a dash of Máxima flair. In April, for instance, the Dutch royals did what all royals do on a regular basis: they released a series of new portraits of their growing family. But along with the classic solo portraits in one of their palaces was a group shot of them, dressed in black-and-white outfits, confidently striding toward the camera, like superheroes about to accept a dangerous mission to save the world. One can almost hear Máxima egging on her more conservative husband into the pose as royal superheroes, out to save their throne.

It’s her successful refresh of the Dutch royal family that could offer lessons to some of the British royals she’s visiting, in Kate and Meghan. While the younger Windsors often make life tough for the media—frequently striding straight into buildings, or blocking journalists’ views with curtains of hair—Máxima makes sure the photographers get their shots and will even—gasp—say a few words to the waiting media. The resultant goodwill engenders even more attention for her causes.

She and Willem-Alexander also deal with the crushing interest in their daughters not by releasing a few still photos each year like Kate and Prince William, but by holding regular photo-ops that satisfy interest in a controlled manner. When Princess Alexia, 12, headed to high school last year, her parents shared their joy through family photos and even a video of her cycling to school.

Máxima also has thrown herself into enjoying high-profile royal events such as formal banquets and openings of parliament in a way that the younger Windsors have avoided. Sure, she was a crown princess from the moment she married, without the luxury of leaving such duties to more senior royals, but she also clearly enjoys the challenges that those events pose. And while Kate and Meghan tend to favour relatively plain gowns, she leans into royal style, bedecking her floor-length frocks with embroidery, ruffles and fringes.

After all, what’s the fun of being a queen if you can’t enjoy it?