Meghan Markle and Prince Harry have a boy: Live updates

In a brief appearance, Prince Harry says he's 'over the moon' and his son is 'absolutely to die for' 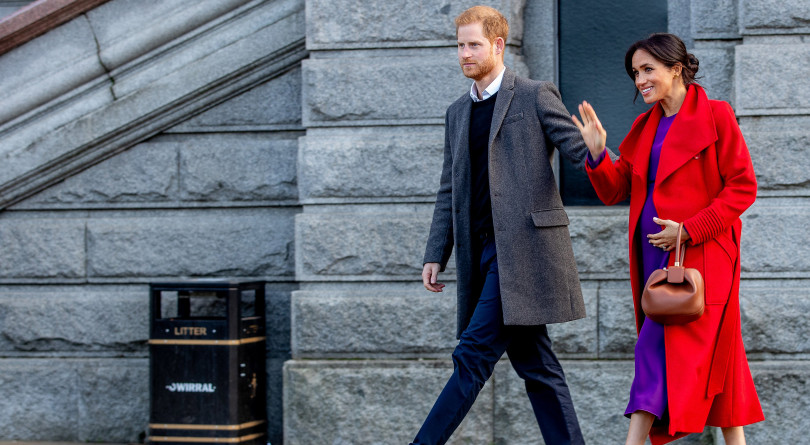 Prince Harry, Duke of Sussex and Meghan, Duchess of Sussex visit a new statue to mark the 100th anniversary of the death of poet Wilfred Owen, which was erected on Hamilton Square in November, during an official visit to Birkenhead on January 14, 2019 in Birkenhead, United Kingdom. (Charlotte Graham/WPA Pool/Getty Images)

Prince Harry and Meghan, Duchess of Sussex are spending the first day with their baby boy at their home, Frogmore Cottage, on the Windsor Castle estate. Meghan’s mother, Doria Ragland, is there as well.

Here is what to look for in the days to come:

Today: As is custom, a framed notice of the birth is on display on a large gilt easel is in the forecourt of Buckingham Palace. It’s close to the fence for those wanting to snap an image. It will stay there until Tuesday at 8 pm London time.

Wednesday: We will see the first photos of the newly enlarged Sussex family. A small pool of photographers and camera operators will capture the first images of Harry, Meghan and their son and then share them with everyone.

It’s likely that Harry and Meghan will announce the name of their son at the same time.

Thursday: As of now, Prince Harry is still expected to pop over to the Netherlands for launch of Invictus Games 2020. He was supposed to arrive on Wednesday but that got pushed back so as to not collide with the start of the big tour of Germany by Prince Charles and Camilla, Duchess of Cornwall. Given the choice between images of a new royal baby or Charles and Camilla, youth will win that particular battle for the front page.

Thomas Markle, the estranged father of Meghan Markle, has issued a statement on the birth of his sixth grandchild.

He told the Sun, a London tabloid: “I’m delighted to hear that mother and child are doing well. I am proud that my new grandson is born into the British royal family and I am sure that he will grow up to serve the crown and the people of Britain with grace, dignity, and honour. GOD bless the child and I wish him health and happiness, and my congratulations to my lovely daughter Duchess Meghan and Prince Harry, and GOD save the Queen.”

He lives in Mexico and is unlikely to see the baby. Wondering why? Check out my piece on why the House of Windsor has never faced an opponent quite like the Markle family.

Now that the early crush of information is over, I’ve done a bit of math on the two royal announcements. And it shows just how much Harry and Meghan wanted this one event in their lives to be completely private.

The royal communications department had promised to keep the media informed when Meghan went into labour and then when she gave birth. It was a way to control the media interest and avoid freelancers staking out every possible birth location.

Buckingham Palace announces Meghan “went into labour in the early hours of this morning” at 2 pm London time. Yet that was already 8.5 hours after Meghan had given birth. No wonder the labour announcement came with a caveat, “An announcement will be made soon.”

Congratulations are streaming in.  On social media, naturally.

Prime Minister Theresa May wished them “all the best at this happy time.”

Congratulations to the Duke and Duchess of Sussex on the arrival of their baby boy. Wishing you all the best at this happy time.

Invictus Games (aka Prince Harry’s other “baby”) sent its wishes. On Thursday, Prince Harry is due to launch the 2020 version in the Netherlands.

Everyone at the Invictus Games Foundation is incredibly happy to hear the news of the #RoyalBaby – congratulations to our Patron HRH The Duke of Sussex and to HRH The Duchess of Sussex!

We know that our #InvictusFamily will join us in welcoming its newest member.

Other charities that Harry and Meghan work with have also sent their messages, including WellChild, a British charity for children with serious illnesses:

Our 2018 Award winners met the Duke and Duchess of Sussex at the #WellChildAwards.

Some of them have shared messages of congratulations for the Duke and Duchess of Sussex on the birth of their baby boy. #royalbaby pic.twitter.com/CQ1kKhknD4

Even Westminster Abbey, where monarchs are crowned, sent congratulations. It’s an abbey where the newest royal will spend lots of time, as many important events are held there.

Congratulations to The Duke and Duchess of Sussex on the birth of their son, from everyone at Westminster Abbey #BabySussex #RoyalBaby

The military is also getting into the act.

The trumpets are sounding for a special #royalbaby congratulations to TRH The Duke and Duchess of Sussex pic.twitter.com/G9uxETnr1c

He and Meghan will show off their son to the world in two days, he believes. It won’t be a huge photo-op like the first photos of the baby’s cousins, Prince George, Princess Charlotte and Prince Louis. Instead a few photographers and camera operators will take images that will be shared (the technical term is “pooled”) with the world’s media, eager for shots of the couple. 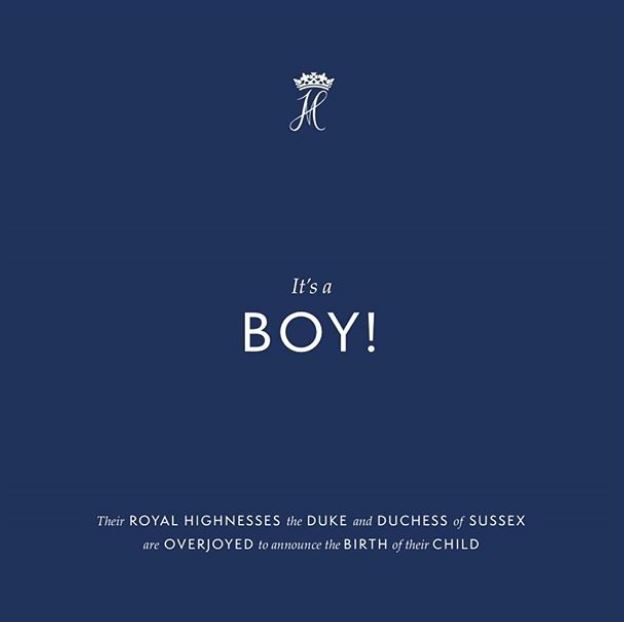 Prince Harry has appeared briefly before cameras to say he’s “over the moon” and his son is “absolutely to die for.” He also heaped praise on Meghan, saying, “I’m so incredibly proud of my wife.”

Prince Harry is “over the moon” and “so incredibly proud of my wife.” Their son was born at 5:26 a.m. #BabySussex #BabyBoySussex #MeghanMarkle pic.twitter.com/ibyjx8NVb2

One interesting point in the official announcement from Buckingham Palace: Meghan’s mother, Doria Ragland, “is with Their Royal Highnesses at Frogmore Cottage.”

So it looks like Meghan and Harry got their wish for a home delivery.

The Queen had all of her children at home: Charles, Andrew and Edward were born at Buckingham Palace while Anne was born in 1950 at Clarence House, where then Princess Elizabeth and Prince Philip were living.

Her Royal Highness The Duchess of Sussex was safely delivered of a son at 0526hrs.

The Duke of Sussex was present for the birth.

The Queen, The Duke of Edinburgh, The Prince of Wales, The Duchess of Cornwall, The Duke and Duchess of Cambridge, Lady Jane Fellowes, Lady Sarah McCorquodale and Earl Spencer have been informed and are delighted with the news.

The Duchess’s mother, Doria Ragland, who is overjoyed by the arrival of her first grandchild, is with Their Royal Highnesses at Frogmore Cottage.

Her Royal Highness and her child are both doing well. 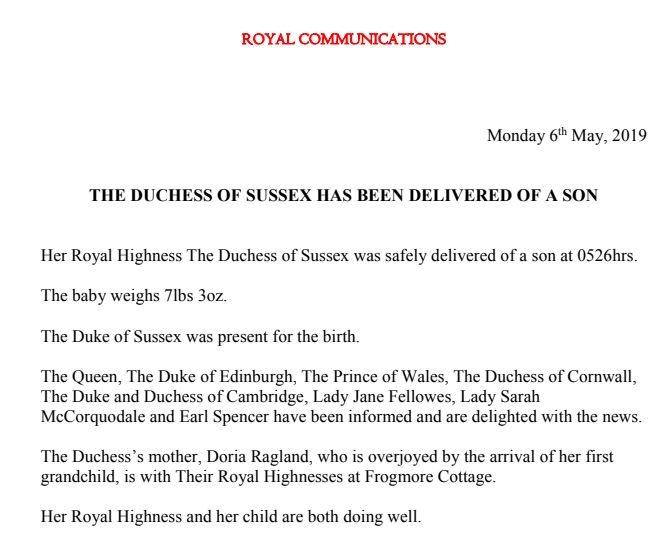 While we wait for another update from Buckingham Palace, a reminder that it’s inaccurate to say, “A prince or princess is about to be born.”

It has to do with a rule that was made 102 years ago by Harry’s great-great-grandfather, King George V in the middle of the First World War when anti-German sentiments were raging. As I explained last year: On July 17, 1917, he issued a royal proclamation relinquishing the use of all German titles and dignities by the extended royal family and renaming the dynasty the House of Windsor. A few months later, he sharply limited who would get British royal titles and style: the titles “prince” and “princess” as well as the styles “Royal Highness” would be reserved only for children of the monarch, children of the sons of a monarch and, finally, the eldest son of the eldest son of the Prince of Wales (Prince Charles has that title today).

The system worked until 2012. That’s when Prince William and Kate, Duchess of Cambridge, announced they were expecting their first child. With changes to the rights of succession, that baby—whether male or female—would automatically be the future monarch. Yet, if the infant was a girl, she wouldn’t get a royal title, as she wasn’t the “eldest living son of the eldest son of the Prince of Wales,” as dictated by the existing rules, issued in the male-first era of royal succession.

Enter the baby’s great-grandmother, Queen Elizabeth II, who came to the rescue by issuing a new Letters Patent on the last day of 2012 that bestowed royal titles and styles to all of William and Kate’s children. Thus arrived HRH Prince George in 2013, HRH Princess Charlotte in 2015 and HRH Prince Louis in 2018.

But that tweak didn’t extend beyond William’s children to those of Harry.

Unless the Queen changes the rules regarding royal styles and titles, Harry and Meghan’s baby will will take a title from his dukedom—so a boy would likely be known as the Earl of Dumbarton and a girl would be Lady [first name] Mountbatten-Windsor. That follows the recent precedent set by the children of Prince Edward, the Queen’s fourth child, and Sophie, Countess of Wessex. Though their young children are technically entitled to be called prince and princess, their parents reportedly decided not to burden them with the titles, knowing such monikers would make it difficult to establish themselves as private citizens, especially as their link to the throne grows more tenuous over time. So their elder is Lady Louise Mountbatten-Windsor and their younger child is James, Viscount Severn.

Meghan and Harry have made no secret that they wanted to keep private as much as possible regarding the birth of their child. Now based at Frogmore Cottage on the Windsor Castle estate, they will eschew the now-obligatory public viewing at the door of a hospital.

The announcement that Meghan went into labour today comes amid reports that she’s around a week overdue. That’s not unusual with the first child, but raises concerns especially as the days pass. There was talk that medical personnel would want to induce labour soon if it didn’t start naturally.

Also, Meghan is 37 years old. Though the Duchess of Sussex appears to have had a completely uneventful pregnancy—she undertook engagements right up to the start of her maternity leave in mid March—her age makes this a “geriatric pregnancy,” which automatically bring additional concerns for the pregnancy and delivery. This is what the Ontario government prenatal education site says on the issue: “It becomes more difficult for many women and men 35 years and over to achieve a pregnancy. Women 35 years and over may have a more difficult pregnancy and birth. They may also have greater risks of medical problems during pregnancy. The baby may also be born with health problems. The quality of a man’s sperm also declines in his mid-thirties.”

Buckingham Palace has confirmed that Meghan, Duchess of Sussex, went into labour in the early hours of today. Prince Harry is by her side. “An announcement will be made soon.” 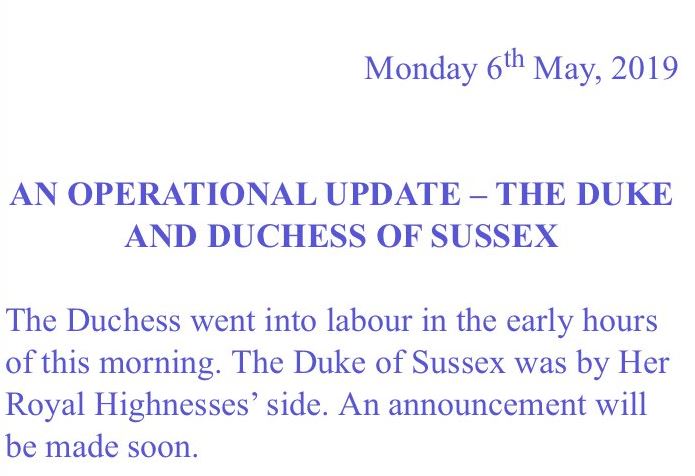