Prince Harry and Meghan Markle present their son to the world: Live updates 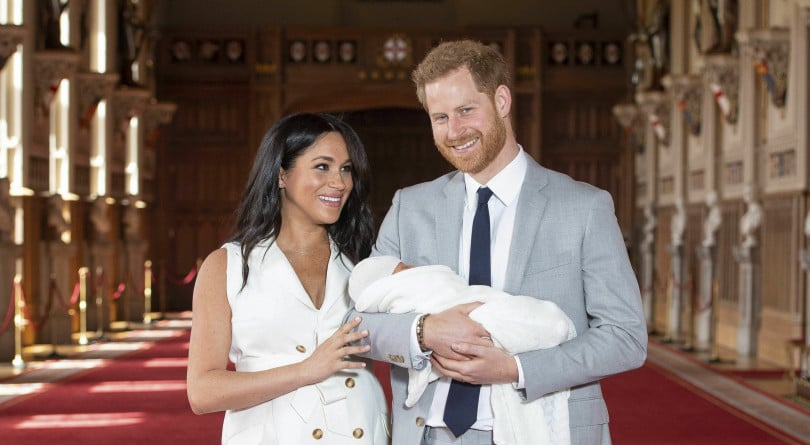 Prince Harry and Meghan, Duchess of Sussex, with their newborn son, in St George's Hall at Windsor Castle, Wednesday May 8, 2019. (Dominic Lipinski/Pool via AP)

More analysis on the name Archie from Twitter historians.

The name “means bright and bold, qualities which the little guy will need when growing up in front of the world’s media,” states professor Kate Williams. She also points out that the most famous Archie is perhaps Archie Leach, better known as Cary Grant. And his Anglo-American background is echoed in that of the newest Archie. Also, the name is not just that of a red-haired comic book character, but also that shared with some superb African-American musicians including Archie Bell.

More surprises were in store for everyone today.

The photo that the palace released when announcing he would be called Archie Harrison Mountbatten-Windsore says it all: Meghan, Harry and their son, Archie, are surrounded by family, including two great-grandparents (the Queen and Prince Philip) and his grandmother, Doria Ragland.

It’s rare for royals to release such a family photograph so quickly. Often after an initial glimpse at a sleeping baby, no one sees the royal child again until a photo is released weeks afterward, or even at the christening.

Equally unusual is the lack of title. Meghan and Harry aren’t going to use Harry’s secondary title of Earl of Dumbarton (which would have made their son Archie, Earl of Dumbarton) but instead he’ll just be Master Archie. At least for now.

The Duke and Duchess of Sussex are delighted to announce that they have named their son Archie Harrison. The baby will be known as Archie Harrison Mountbatten-Windsor.

The Duke and Duchess of Sussex are pleased to announce they have named their first born child: Archie Harrison Mountbatten-Windsor This afternoon Their Royal Highnesses introduced Her Majesty The Queen to her eighth great-grandchild at Windsor Castle. The Duke of Edinburgh and The Duchess’ mother were also present for this special occasion. Photo credit: Chris Allerton ©️SussexRoyal

Fashion update: Meghan wore one of her favourite silhouettes today. The v-necked double-breasted sleeveless beige dress is by Grace Wales Bonner. She has a British mother and Jamaican father, writes Emily Nash of Hello.

Meghan’s pick not only is a reference to the fact that she and her baby are the first mixed race members of the royal family but also hews to her choice of seeking out and  wearing fashions by less well-known designers. The impact can be massive. When she wore a dress by Australian designer Karen Gee at the start of the Sussex tour last fall, Gee’s website crashed under the attention.

The “glam or not” question has been answered. Meghan went for a casually polished look as she and Prince Harry presented their new son to the world. She follows in the footsteps of Kate, Duchess of Cambridge and other royal women in wanting to look her best in those first iconic images.

As I wrote in April, some had hoped the duchess would flout tradition after the physical ordeal of childbirth. Instead, she kept to her minimalist styling, with long flowing hair and minimalist make-up, which brought “a little reality into a world increasingly obsessed with projecting the ‘perfect image,’ whatever that means.”

And like Kate, she made no effort to hide her post-delivery baby bump. “That touch of normalcy by one of the most photographed women of the world helps counter the pressures that new moms face to instantly lose their mummy tummies and fit into skinny jeans,” I wrote. And just like Kate, she wore heels with one of her favourite styles of dress.

I thought I had seen Meghan’s dress before but what I noticed was she really does like the button down, sleeveless with collar style dress… new mom looked absolutely amazing, healthy, happy and glowing this afternoon!!! 🇬🇧👑 #MummySussex #MommySussex pic.twitter.com/eCtVLjbZuS

Windsor Castle is absolutely enormous. It’s the largest and oldest inhabited castle in the world. Yet who should Prince Harry and Meghan, Duchess of Sussex, bump into on their way to St. George’s Hall but their two-day-old son’s great-grandfather, Prince Philip, Duke of Edinburgh. It “was so nice,” Meghan commented. After the brief five-minute photo op for a few camera and video operators (plus the Press Association’s Alan Jones, who asked the questions and persuaded the couple to show the face of their sleeping child), they were off to the private apartment of Queen Elizabeth II and Prince Philip. The monarch, 93, and her husband, 98 in June, spend a lot of time at Windsor. Yesterday, Philip came out of his retirement to join his wife at a function for the Order of Merit. It’s there that former Canadian prime minister Jean Chrétien, a member of that prestigious honour since 2009, asked the Queen about her newest great-grandchild.

The Queen is asked about her newest great grandchild:
“Life is good for Your Majesty?”
“Yes thank you”
“Another great grandchild! How many of them have you got now?”
“Eight!”#royalbaby #BabySussex pic.twitter.com/zZKSmlTaH9

“It’ll be a nice moment to introduce the baby to more family,” Meghan explained at the photo op, adding “and my mum’s with us as well.” Doria Ragland is staying with the Sussexes at their newly renovated home of Frogmore Cottage, located a short distance away from Windsor Castle in the royal family’s private retreat of Frogmore.

“It’s magic, it’s pretty amazing,” Meghan, Duchess of Sussex, said as she and Prince Harry show off their new son. “I have the two best guys in the world so I’m really happy.” She added “He has the sweetest temperament, he’s really calm,” as Harry held their sleeping two-day-old son in St. George’s Hall at Windsor Castle. “I don’t know who he gets that from,” Harry added with a laugh.

Who does he look like? “Everyone says that babies change so much over two weeks we’re basically monitoring how the changing process happens over this next month,  really,” Harry explained. “But his looks are changing every single day, so who knows.”

They are enjoying being new parents. “It’s great,” Harry said. “Parenting is amazing. It’s only been two and a half days, three days, but we’re just so thrilled to have our own little bundle of joy.”

Prince Harry and Meghan, Duchess of Sussex, showed off their son to the world at St. George’s Hall in Windsor Castle.

“It’s magic. I have two of the best guys in the world,” Meghan said. “He has the sweetest temperament. Calm…he’s been a dream. It’s been a special couple of days.”

Who does he look like? “His looks change every single day, so who knows?” Harry answers. “We’re so happy to have our own little bundle of joy.”

They then went off to introduce the baby to Queen Elizabeth II and Prince Philip, who bumped into the couple on their way into St. George’s Hall.

Location note: Windsor Castle is just up the Long Walk from their home of Frogmore Cottage. As for the inside venue, well, it’s absolutely pouring rain outside.

The happy day is not without controversy as the public relations strategies of the Duke and Duchess of Sussex have garnered some rather pointed criticism from among the British press. While everyone knew and expected that Harry and Meghan would keep events around the birth of their child as private as possible, some of their decisions have raised eyebrows.

“How the royal PR machine’s treatment of both the public and press left us lost for words” was a Telegraph headline as Camilla Tominey excoriated the couple and their staff. On Monday, they sent out a press release at around 2 pm local time informing everyone that Meghan had gone into labour in the early hours of the day. What it didn’t say was that she’d given birth 8.5 hours before and was home at Frogmore Cottage. Then came the birth announcement that left the impression it had been a home delivery (some papers report they drove to London for a hospital birth then returned home.)

Needless to say, the media wasn’t happy at being misled (some used much much stronger language) and not being told even the basics of this very high-profile royal birth.

While everyone respects the royal couple’s right to privacy, was it really necessary to be so cloak and dagger about whether the baby was born at home or in hospital when the information is going to be made public on the birth certificate anyway?… Harry has long had a complicated relationship with the press – but if the prince is worried about the media printing ‘lies’ about him, why not give them the truth to report rather than unconfirmed ‘rumours’?

If Harry and Meghan want total privacy, they may be better off relinquishing their royal titles and moving abroad for a quieter life (I believe a secondment to Africa has already been mooted). Unfortunately you cannot switch on the tap of publicity when it suits you, say to promote charitable causes, cookbooks and such like – and then switch it off when it doesn’t.

If that wasn’t enough, one of the Daily Mail’s headlines is “Special access to U.S. network that’s fronted by Meghan’s friend.” Normally the pooled media allowed into royal events in Britain, such as to get images of the royal baby, are selected from the British press corp. Not this time.

“The Duke and Duchess of Sussex have insisted on a US broadcaster being present when they unveil their baby son to the world today—and have picked the channel fronted by one of Meghan’s best friends.The couple have arranged for CBS, the network whose morning show is fronted by the duchess’s confidante Gayle King—a guest at her New York baby shower—to join a small British media contingent for the photocall at Windsor Castle. The decision came as a surprise to British television channels including the BBC and ITV—not to mention many at Buckingham Palace…

Miss King came to the UK to cover the birth and visited the couple at Frogmore Cottage just a few days ago, but is understood to have returned to the US when it emerged the baby was overdue. Handily for her, it is expected that footage of Baby Sussex will be broadcast in America in time for her popular breakfast show, This Morning.

His parents, Prince Harry and Meghan, Duchess of Sussex, show off their 7 lb 3 oz son to the world. Pictures are expected within the next few hours, so stay tuned. The event won’t be like the hospital doorstop photo ops of recent years, but rather a small group of media will record the event, then share it with the rest of the world’s media. (It’s called “pooled” coverage and happens frequently when royals want to control media access, sometimes because the space is too small for the entire press corp.)

A recap for those who haven’t been near any media at all for the last 48 hours: On Monday, May 6, “Her Royal Highness The Duchess of Sussex was safely delivered of a son at 0526 hrs,” to quote the old-fashioned way royal births are announced. Harry and Meghan’s boy is 7th in line to the throne.

“I’m so incredibly proud of my wife,” Prince Harry gushed. “This little thing is absolutely to die for.”

Today, in addition to seeing our first images of the baby, it’s also expected that his great-grandmother, Queen Elizabeth II, will visit. The 93-year-old monarch spends much of her working week at Windsor Castle, a short hop away from Frogmore Cottage. Yesterday, she beamed at an event when asked about her eighth great-grandchild.