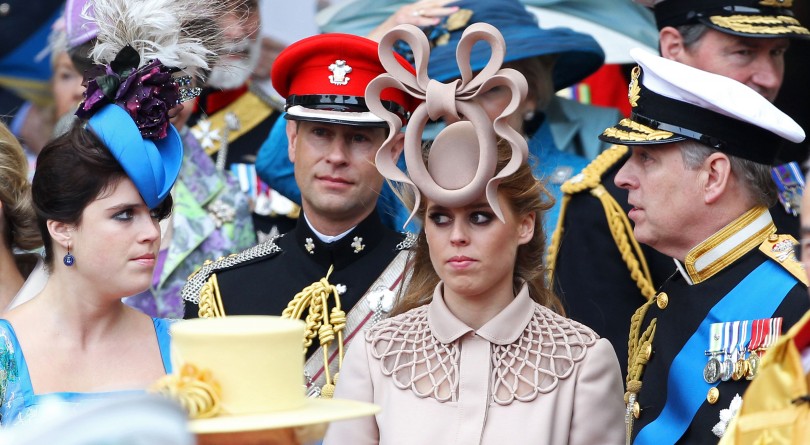 Princess Eugenie of York, Prince Edward, Earl of Wessex, Princess Beatrice of York and Prince Andrew, Duke of York following the marriage of Prince William, Duke of Cambridge and Catherine, Duchess of Cambridge at Westminster Abbey on April 29, 2011 in London, England. (Photo by Chris Jackson/Getty Images)

Royal weddings are like no other event, especially when it comes to fashion. They are closest to the Oscars, where actresses want to look memorable without landing on the infamous or worst dressed list. Having dresses made by top designers specifically for the event helps, as does long experience at dressing for such events.

It can be a hard line to hew, and royal faux pas do occur. Well, hello Princess Beatrice and Princess Eugenie! In 2011, their choices for the wedding of William and Kate bombed. Eugenie’s Vivienne Westwood dress was an ill-fitting confection of harsh cobalt blue and green with a wrinkled asymmetrical hem. Her blue Philip Treacy hat was offset by clashing maroon flowers and beige feathers.

READ: How to watch the royal wedding of Prince Harry and Meghan Markle: an expert’s guide

Beatrice’s taupe Valentino couture coat and dress were gorgeous. But all anyone remembers is her matching toilet seat/wedding ribbon hat, also by Philip Treacy. It was a complete mismatch for her narrow face and long hair, drawing unwanted attention on the heavy rings of black liner around her eyes. At least Beatrice got a bit of redemption by selling the hat for charity on eBay  for US$131,000.

For the wedding of Prince Harry and Meghan Markle, here is an educated analysis of what to expect in terms of royal fashion. And in case you can’t tell the ladies apart, here’s our royal identity cheat sheet. (Oh, and this is only royal women as the men are wearing morning suits or military outfits. Yawn.)

Doria Ragland: The hardest outfit must belong to the mother of the bride, as she can’t overshadow her daughter, can’t look too matronly and can’t wear anything too risqué. And she’s from Los Angeles, not known for its formal millinery and wedding scene.

Ragland’s style is comfortable elegance, so expect something along those lines. She carried a Burberry garment bag for her flight to London but that may not mean anything. And it will be interesting to see what hat she chooses, especially if she keeps her hair in her trademark short dreads. She could set style trends for years. 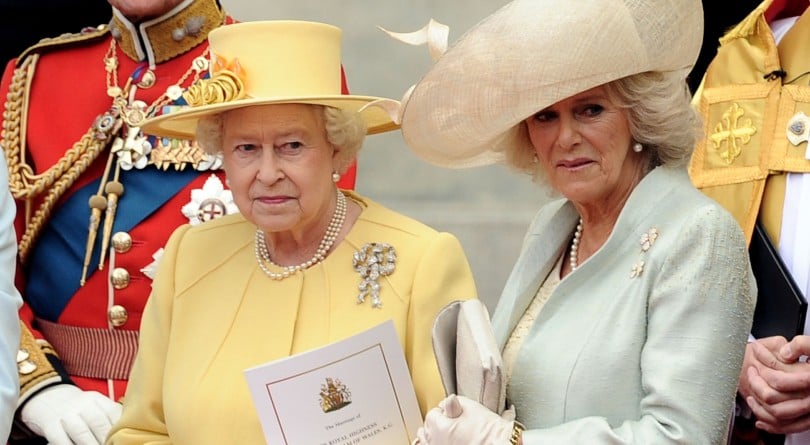 Queen Elizabeth II: The Queen famously wears a regal uniform—a tailored coat in a bright colour with a matching dress, often in a wildly-patterned print; a hat that won’t obstruct crowds from getting a good look at her; a diamond brooch, likely with a family connection (more on jewellery here); a multi-strand pearl necklace and matching diamond-and-pearl earrings; and a patent handbag by Launer draped over one arm.

She wore yellow for grandson William’s wedding, lilac for son Edward’s, shades of blue for her other three children (Charles’s first wedding to Diana, Andrew and Anne). And white for Charles’s second (the bride wore blue). Expect a bright colour (pink, please).

Camilla, duchess of Cornwall: It’s almost a certainty that she will wear a dramatically large hat by Philip Treacy, for they’ve formed a design match made in millinery heaven. Her outfit will be fairly plain, likely navy blue, befitting her low-key position at the wedding as the stepmother of the groom. Her bling will come in her choice of pearl choker (she has a half dozen or so).

Princess Anne: Her fashion taste is, err, unique: She buys expensive outfits and wears them for years, only tweaking their styles when they fall radically out of fashion. In 2008, she wore an outfit to a family wedding that was originally worn back in 1981 to the nuptials of Charles and Diana. If history is a judge, expect her to wear a stridently patterned outfit with an ill-fashioned hat.

Sophie, countess of Wessex: The wife of the Queen’s youngest son, Prince Edward, is cutting an increasingly fashion forward look, albeit one that looks royal at the same time. She wears a lot of formfitting dresses by Victoria Beckham, Erdem and Stella McCartney. And she is tied with Camilla as a millinery pin-up royal known for her daring hat choices. In 2011, her Bruce Oldfield ecru silk jacket and skirt and matching hat by Jane Taylor was the epitome of British wedding fashion. The outfit’s heavily embroidered cuffs were complemented by a matching clutch.

Expect something similar for this wedding. Certainly her hat should be spectacular.

Princess Beatrice and Princess Eugenie of York: Since their 2011 debacle, the York sisters have upped their fashion game. Yes, they still wear a lot of au-courant couture outfits, but have tempered their choices for large royal events such as Ascot and Buckingham Palace garden parties.

Still, their choices are still a bit hit or miss, so if there are fashion wild cards for this wedding, two are going to the York princesses.