Six reasons why Meghan Markle is just like us

Even if she does live in a palace with a prince who's the grandson of the Queen, Meghan's carving out a role as a royal with a regular side 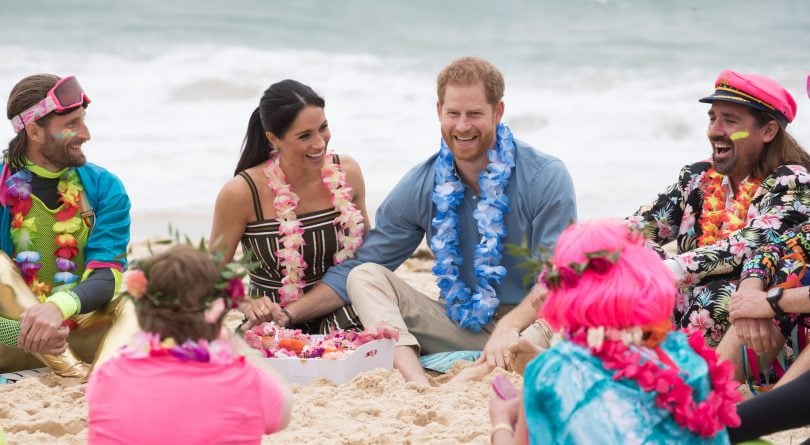 Prince Harry, Duke of Sussex and Meghan, Duchess of Sussex visit Bondi Beach on October 19, 2018 in Sydney, Australia. The Duke and Duchess of Sussex are on their official 16-day Autumn tour visiting cities in Australia, Fiji, Tonga and New Zealand. (Samir Hussein/WireImage/Getty Images)

Royals don’t usually bring homemade banana bread to an engagement. But then again, Meghan, Duchess of Sussex, isn’t a typical member of the House of Windsor. She’s only been a full-time working royal since her wedding in May to Prince Harry, but she’s carving out a role as a royal who is just like us.

The American not only spent years building a career as a successful actress, culminating with a seven-year stint on Suits, but she also built a following of her now defunct lifestyle site, Tig, which showcased her love of food, fashion and travel. And now those common touches are on display to everyone during the couple’s current royal tour. Sure, they are little details, but they add up.

Given her culinary interests, it’s not surprising that she spent part of an evening away from the public in the commercial kitchen of the Admiralty House, the governor general’s home in Sydney, where she whipped up a banana-ginger-and-chocolate loaf. The gift was for the Woodley family, whose Mountain View Farm she and Harry visited the next day in Dubbo, Australia. The Woodleys, like other farmers in the area, have been badly hit by the extended drought in the area, and the royals visited to see how they, and others, are coping. (Oh, and she also brought a tin of Fortnum & Mason tea—its royal blend, of course.)

Then there are the flats she wore on her first full day of duties in Sydney. When she and Harry finished petting a koala and needed to walk to the harbour to take a boat to their next event, she slipped off her vertiginous pumps for practical flats (made of recycled bottles, befitting her environmental cred). Her choice was in sharp contrast to so many famous women who often seem to defy gravity, and the pain threshold, by living in high heels. The message was clear: if Meghan can wear flats during high-profile events, then it’s OK for everyone else to do the same.

There are also times when you just want to relax while working. So when she and Harry arrived at the famous Bondi Beach, they followed the example of the locals and immediately tossed their shoes aside to go barefoot. That contrasts with her sister-in-law, Kate, Duchess of Cambridge, who kept her casual wedge sandals on when visiting another Australian beach in 2014.

Like other young royal women, Meghan knows that one of the best ways to show respect to a host nation is to wear its fashions. So it wasn’t a coincidence when she wore a classic white sheath by Australian brand Karen Gee. And it’s also no coincidence that when the outfit was ID’d by fashion bloggers, the firm’s website crashed due to worldwide demand into anything and everything Meghan wears. While most royals, like Kate, wear one or two such local outfits, Meghan has taken it further, wearing a variety of Australian designers, including a Dion Lee dress, as well as a Martin Grant trench coat that first day, then one of his beach dresses on day three.

Then there’s the pasta necklace. While on a walkabout in Melbourne, she was given a pasta necklace by Gavin Hazelwood, 6, who ditched school with parental approval, just so he could hand Meghan his homemade necklace, carefully strung on a blue ribbon. While most royals would admire the gold-painted creation, then hand it off to an aide, Meghan slipped it over her neck and wore it.

By far the biggest difference is how Meghan has been open about her pregnancy. Usually, royals don’t say much, for fear they will feed an insatiable demand for even the smallest nugget of information. Sure, she’s not getting into details, but every day seems to bring a bit more news. During that Bondi Beach event, she talked to a fellow expectant mother about her pregnancy: “Meghan told me that pregnancy was like having jet lag. She said she was up at 4:30 a.m. this morning doing yoga in her room as she couldn’t sleep.”

As this tour marches on, with more events in Australia as well as Fiji, Tonga and New Zealand, the number of Meghan’s “just like us” moments will certainly increase. Yet, for all her common touches, she’s only kinda like us. After all, she does live in a palace with her prince of a husband who is the grandson of Queen Elizabeth II.