Speculating on the name of Harry and Meghan's baby—Albus, anyone?

Top bets are on Diana or James. But could it be Alice, Philip or—heaven forbid—Shane? 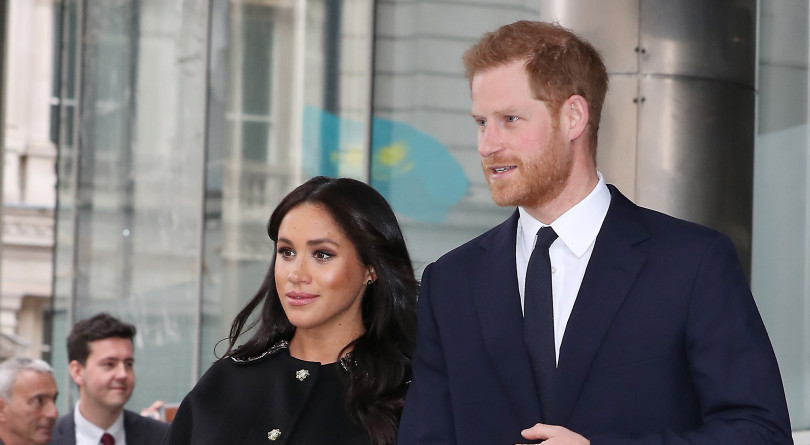 Meghan, Duchess of Sussex and Prince Harry, Duke of Sussex visit New Zealand House to sign the book of condolence on behalf of the Royal Family on March 19, 2019 in London, England. (Photo by Neil Mockford/GC Images)

If any part of royal watching is an absolute guessing game, it is anticipating baby names. Film critics are able to weigh the strengths of the various movies before deciding which is likely to scoop up a top award. Ditto for music critics. But the options for a royal babe are often too numerous to count—boy or girl, family name or something original, current British favourites or a historical choice. And that’s why folk around the world use an impending royal birth as an excuse to mull over names and take a flyer on what the newest Windsor will be called, even if they have no interest in the monarchy whatsoever.

A year ago, the favourites during the Great Kate Wait No. 3 were Mary, Alice, Victoria and Elizabeth for a girl, and Arthur, Albert, Frederick and Philip for a boy. All the early favourites were wrong. Prince William and Kate, Duchess of Cambridge, emerged from the Lindo Wing of St. Mary’s Hospital in London holding Prince Louis Arthur Charles. The name was completely unexpected—almost as if his parents looked at the top choices being bandied around and thought, “Nah, let’s pick something else.” Though some watchers chose Louis as a middle name, very, very few had it as their only pick for a boy’s first name, especially as it was one of his older brother’s middle names. The betting firm Ladbrokes had been taking 20/1 odds on Louis, leaving a few fortunate punters very happy but everyone else out of luck.

Sometimes the choices are a bit easier—when Kate gave birth to her first child, a son, in 2013, the field of suitable male options was relatively short. George was a heavy favourite as the couple needed a name suitable for a future king. (Anyone who bet on esoteric choices such as Dwayne and Aethelred knew they were buying a lottery ticket—great for speculative fun while chatting over a pint or two, but not a wise choice to finance one’s retirement.)

This time, the great name game is wide open for the baby of Meghan, Duchess of Sussex, and Prince Harry. As this child will be seventh in line to the throne (and will fall down the line of succession when his or her Cambridge cousins marry and have their own children), the couple can pick a name that is utterly their own choice. It’s happened before.

In 1981, Princess Anne surprised everyone by announcing her daughter (and Queen Elizabeth II’s first granddaughter) would be called Zara, not the classic Sarah. The name, which Anne says means “bright as the dawn” in Greek, was a suggestion from her older brother, Prince Charles. Zara’s middle names are more traditional royal selections: Anne and Elizabeth.

RELATED: Prince Harry and Meghan Markle’s baby and the long arm of the IRS

Right now, the William Hill betting site has Diana, Victoria and Alice as the top female names. Both have been royal betting favourites for years: Diana is the name of Harry’s beloved mother, while Victoria is the name of Britain’s 19th-century monarch (its standing helped by the current airing of a royal drama series titled Victoria).

Dig a little deeper, and it soon becomes clear that few think Harry and Meghan are going to hew to a boringly royal first name. The fourth spot is a tie between Isobella/Isabella and Grace, while Harriett and Eleanor are in the top 10 (on the female side). In a completely unscientific poll of royal Twitter, the old-fashioned names of Alice and Victoria were tops on the girl side. (Alice has been a fan favourite for a few years now, and has strong royal history behind it as well as current popularity.)

Choices can vary wildly. When it came to a boy’s name, there was really only one choice in that Twitter poll: Philip. It was the runaway top choice, with Arthur a distant second. It’s widely assumed that one of Prince Philip’s grandchildren will want to claim his name for one of their children, but, with five great-granddaughters and only two great-grandsons (George and Louis), there haven’t been many opportunities for the name to selected. So perhaps Harry, who is very fond of his grandfather, will snatch it off the royal name list. Yet interestingly, Philip (or Phillip) isn’t a popular betting option. With 33/1 odds, it is way down the William Hill list in seventh spot, far behind the top male name of James (16/1 odds).

READ MORE: Will Meghan Markle go glam for her first appearance with her new baby?

Some of the names are true outliers: Albus (as in Harry Potter’s beloved headmaster, Albus Dumbledore) is 500/1, along with Ginger, Chardonnay, Lebron and Shane. Others are head scratchers, including Princess, which, bizarrely, carries even better odds of 100/1.

There are lots of completely fresh names for Harry and Meghan to choose, for even though the monarchy is a thousand years old, it tends to reuse names with tedious frequency—hello Anne, Mary, Edward, Henry and George. Perhaps the Sussexes will look at their close relations for inspiration, opting for Doria or Ruth for a girl, or Gordon or Alvin for a boy. If those names don’t make it into the lead spot, they could land in a secondary position as royal children tend to have three or four names.

They could eschew family options and select a friend’s name, perhaps that of Serena Williams, an extremely close friend of Meghan. Last year, Williams revealed that the two, who met at a Super Bowl party in 2010, often text each other, saying, “We have known each other for a long time, but we really are relying on each other a lot recently.” The tennis great co-hosted a baby shower for Meghan in New York City with another friend, Amal Clooney.

The pick may include a more poignant remembrance, such as Morten for Morten Krogh Jensen, the 21-year-old Danish soldier killed in Afghanistan in 2008. Prince Harry flew out of that nation in the plane that carried Jensen’s coffin back to his family, as well as three wounded British troops in medically induced comas. (In 2017, Harry had a private meeting with Jensen’s parents while on a trip to Denmark.) Harry has spoken often about how that flight home changed him. “It struck me that this flight was just one of many carrying home men and women whose lives would be changed forever, and some who had made the ultimate sacrifice,” he said in 2016 in Toronto. “The direction of my life changed with it. I knew that it was my responsibility to use the great platform that I have to help the world understand and be inspired by the spirit of those who wear the uniform,” he said in 2017 at the result of that transformation, the Invictus Games.

Regardless, Harry and Meghan’s choice is sure to surprise, and confound, everyone, even the bookmakers. That’s the fun, after all.