The extraordinary wedding of Prince Harry and Meghan Markle

It may not have been the grandest royal wedding, but it was a very personal ceremony that reflected the bride and groom 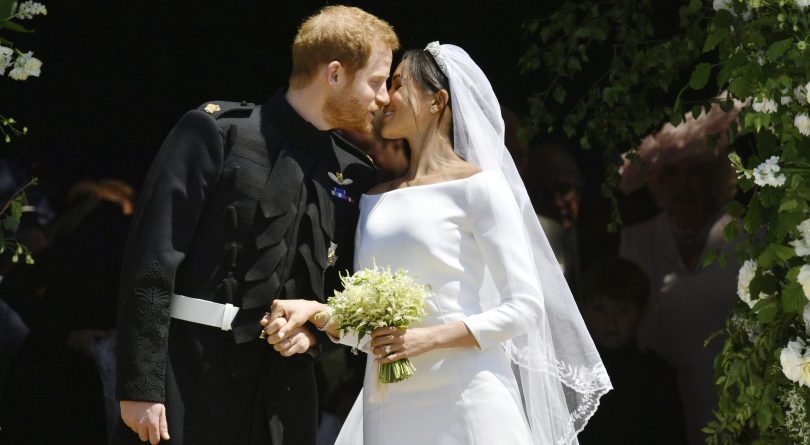 Prince Harry and Meghan Markle kiss on the steps of St George’s Chapel in Windsor Castle after their wedding in Windsor, near London, England, Saturday, May 19, 2018. (Ben Birchhall/AP/CP)

There are the traditions of a royal wedding: the archbishop of Canterbury officiates, everyone wears their best-est outfits, the flowers are spectacular, the pageantry is choreographed to the last detail, the bride’s shoulders are covered (also, because ancient churches and cathedrals are chilly). The wedding of Meghan Markle and Prince Harry had all that, and so much more. It was relaxed, royal, and very, very personal. They’d made every choice: Harry even handpicked several flowers from their private garden at Kensington Palace to be added to his bride’s bouquet, which also featured forget-me-knots, his mother’s favourite flower and myrtle, which has been part of every royal wedding bouquet since 1858.

First, Meghan Markle entered St. George’s Chapel on her own, her father being ill and unable to escort her down the aisle. Aside from a quick smile to the Canadian page boys, 7-year-old twins Brian and John Mulroney, as she exited the Queen’s claret-coloured Rolls-Royce, the bride was calm and composed. She straightened her starkly simple bateau-necked white gown and veil, designed by Givenchy, and slowly climbed the steps to enter the medieval chapel inside Windsor Castle.

SEE: Videos from the royal wedding

Waiting for her were 600 guests, many chosen personally by the couple. “You layer up your friendships as you go through life,” explained Jamie Lowther-Pinkerton, Prince Harry’s former private secretary, to the BBC. So included were school, military, charitable works, and personal family friends. There were athletes from the Invictus Games; Prince Seeiso of Lesotho, co-founder with Harry of the charity Sentebale; celebrities who contributed to royal charities (George and Amal Clooney, Victoria and David Beckham), as well as Harry’s ex-girlfriends (Chelvy Davy and Cressida Bonas).

Before the service, the guests chatted with each other in the increasingly full chapel. Now they stood for the bride, and her 10 bridesmaids and page-boys. Half way through the chapel, Meghan met Prince Charles, who escorted her the last way to the altar and her groom, Prince Harry.

Though Harry appeared nervous before Meghan arrived, the couple looked relaxed during the service, enjoying every moment, unlike William and Kate, who sometimes looked overwhelmed by their more formal semi-state nuptials in 2011. It helped that they knew the officiant, the archbishop of Canterbury, Justin Welby, who had baptized Meghan just a few weeks before their wedding. Indeed, Welby was so at ease with the couple that he got a laugh from from them when he waited, just for a second, before asking Meghan if she really did want to marry Harry (the answer, not unexpectedly, was “I will.”) And in a break with family tradition, Prince Harry chose to wear a platinum band on his wedding finger. None of his closest male relatives wears one, though Charles has a thin gold band beside his signet ring on a pinkie finger.

Then, there was that address by Bishop Michael Curry, primate of the American Episcopal Church. It was a master class in evangelical oratory. He started with a quote from Martin Luther King Jr. on the “redemptive power of love,” then segued into the teachings of a French Jesuit before ending with more MLK. The theme was love, love and love. He kept (largely) to his prepared text, with an affectionate “We gotta get you all married” dropped in near the end.

In one of his most powerful sections, he said:

The theme of inclusion and love didn’t end there: one of those reading the prayers was Archbishop Angaelos of the Coptic Church, invited by Prince Charles, who has been vocal in his concerns about the frequent, deadly attacks on Copts and their churches in Egypt, as well as attacks on other Christians around the world because of their faith.

The musical choices, selected by the couple and Prince Charles, echoed the choices of the religious parts of the service: simple and yet personal, a fusion of old and new, including Handel as well as modern American classics such as “Stand by Me” and “This little light of mine” by Etta James. Even the musicians had a connection: The cellist, Sheku Kanneh-Mason, who’d won the BBC Young Musicians of the Year award in 2016. He received a personal invitation to play after catching Prince Harry’s attention at a charity event

Then there are the 53 floral emblems of the Commonwealth nations embroidered into Meghan’s veil—a tribute to an organization that means so much for the royal family. As the official press release stated, “The Commonwealth family of nations—of which Her Majesty the Queen is head—will be a central part of Prince Harry’s and Ms. Markle’s official work following His Royal Highness’s appointment as Commonwealth Youth Ambassador. Ms. Markle wanted to express her gratitude for the opportunity to support the work of the Commonwealth by incorporating references to its members into the design of her wedding dress.” (For the record, Canada’s contribution was the bunchberry, Cornus canadensis.)

Afterward, everyone got what they wanted: a kiss. They stopped briefly, just outside the flower-bedecked doors to St. George’s Chapel, then it was time for the rest of Windsor to see the bride and groom. Thousands lined the the carriage route around the small town as well as the grand processional Long Walk to the castle. One of those in the crowds was Marlene Koenig, an expert on British and European royalty from the Washington, D.C., area. She camped out overnight in a sleeping bag to claim a prime spot on the Long Walk. Her reward: a perfect front row photo of the happy couple as they went by.

It may not be the grandest of royal weddings but it’s the one that Meghan and Harry wanted.