For years, the current British royal family has deployed the threat of social shaming to smother rumours, pests, and foes. But what can they do if that foe has nothing to lose? 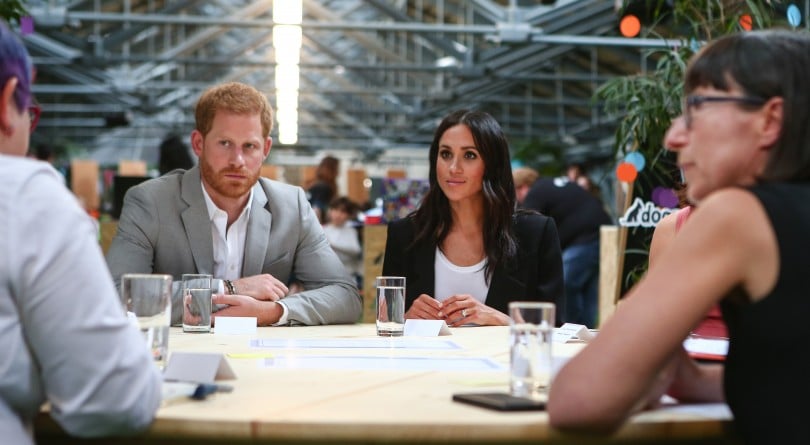 Harry, Duke of Sussex and Meghan, Duchess of Sussex visit the Dogpatch startup hub in Dublin on the final day of their trip to Ireland on July 11, 2018 in Dublin, Ireland. (Jimmy Rainford/Pool/Getty Images)

How do you solve a problem like the Markles?

The estranged extended family of Meghan Markle, newly minted as HRH the Duchess of Sussex, won’t stop capitalizing on the intense interest in Prince Harry’s wife, while fattening their bank accounts at the same time. Every utterance is guaranteed to spawn headlines around the world. “Prince Harry said to ‘give Donald Trump a chance,’ according to Meghan Markle’s father,” was the Washington Post take after Thomas Markle revealed that nugget in a paid interview with Good Morning Britain. Meghan’s half-sister Samantha revealed in her own TV interview that Meghan hadn’t talked to their father on his birthday and later compared the newest royal to Cruella de Vil.

It’s the sort of negative publicity that the Windsors and their staff famously take pains to avoid. And yet no one at the palace seems to have an idea of how to staunch the flow of stories. For the Markles are unlike any in-laws the royal family has ever had to deal with: opponents with nothing to lose.

READ MORE: Who’s who in the Markle family

Tales from the Markle clan blanketed the airways and tabloids in the lead-up to Harry and Meghan’s May 19 wedding at Windsor Castle—never mind the fact that many hadn’t even seen Meghan for years. Meghan’s older half-sister Samantha, who hasn’t seen her actress sister in a decade, repeatedly slagged her in the press, calling her “narcissistic and selfish.” A half-brother claimed Meghan cut off his pre-wedding attempt for a reconciliation by saying, “That’s distant family and I don’t know those people.” His son, a legal cannabis farmer, showed off a new strain of marijuana called “Markle Sparkle.” Others revealed family photo albums and memories to a media eager for any scraps of information, however tenuously linked to Meghan.

Then came the disastrous Thomas Markle fiasco when, a few days before her nuptials, Meghan’s father was revealed to have been paid for staged “paparazzi” photos of him in his hometown of Rosarito Beach, Mexico. It was Samantha who encouraged their father to sell access to a photo agency. He apologized, said he wouldn’t walk her down the aisle, changed his mind, then claimed to have had a heart attack that necessitated emergency surgery so he couldn’t fly to Britain—revelations that were mostly relayed to the world not by Kensington Palace officials, but by the Los Angeles-based TMZ gossip site. The palace, renowned for its ability to control narratives and tamp down rumour mongering, looked woefully caught off-guard. In response to the whole affair, it issued an innocuous statement from Meghan—“I have always cared for my father and hope he can be given the space he needs to focus on his health”—and seemed to cross its fingers and hope for the best.

If Meghan, Harry and royal officials hoped the slow drip of Markle revelations would dry up after the intense interest generated by their wedding died down, they were soon disappointed. Sour revelations by Thomas and Samantha Markle continue to ricochet around the globe. “I’m really hurt that she’s cut me off completely,” wailed her father Thomas in a nine-hour interview with the Mail on Sunday a few days before her 37th birthday. “Perhaps it would be easier if I died. Everybody would be filled with sympathy for her,” he said, adding ominously, “I’ve just about reached my limit with Meghan and the royal family. They want me to be silent, they want me to just go away. But I won’t be silenced. I refuse to stay quiet. What riles me is Meghan’s sense of superiority. She’d be nothing without me. I made her the duchess she is today.” Samantha is equally bitter, especially over Meghan’s reputation for doing good deeds: “Humanitarians work towards resolve and peace. But my sister disposed of the entire family.” 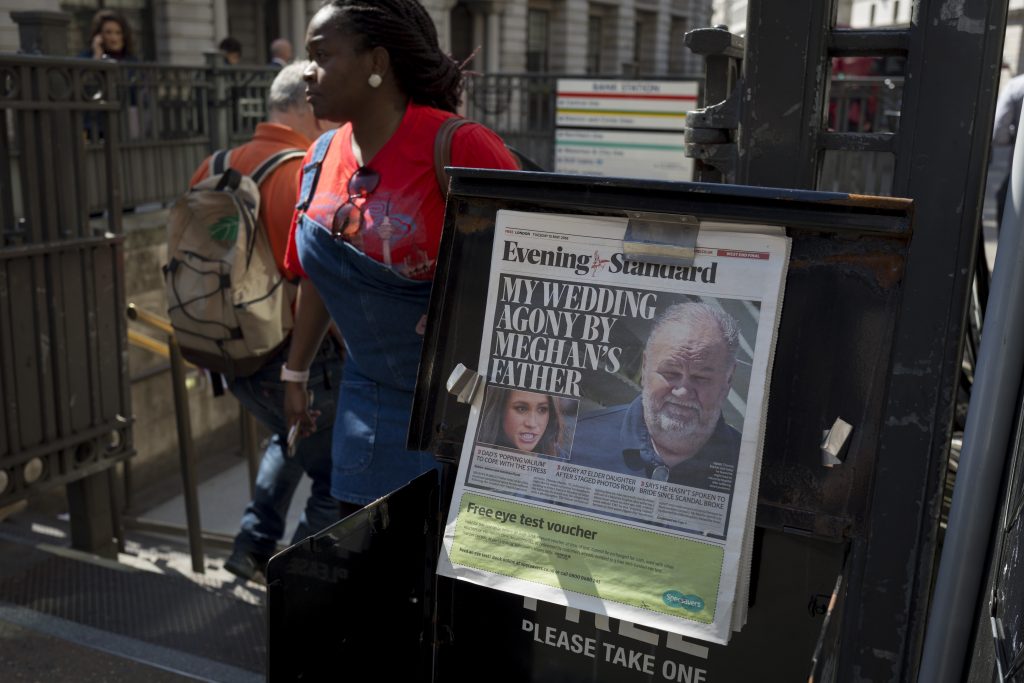 Evening Standard headlines with news of Meghan Markle’s father not attending the upcoming royal wedding between the American actor and prince Harry, at Bank underground station in the City of London, the capital’s financial district, on May 15, 2018. (Richard Baker / In Pictures via Getty Images)

It’s clear that the Markles did not read—or have simply ignored—the unwritten code of conduct when relatives marry into the royal family: you, and all your friends and relatives, stay mum about the Windsors, and that if they comment at all, they eschew tasty nuggets for banalities. The prime example of this proper etiquette is Pippa Middleton. Though she rocketed to fame by being a bridesmaid to her sister Kate in her 2011 marriage to Prince William, she’s frustrated interviewers by saying little about her famous relations. That’s the path that Prince Harry’s new mother-in-law, Doria Ragland, long-divorced from Thomas, appears to be walking down.

READ MORE: The Markles aren’t a mess—they’re a mirror

Anyone with an out-of-control family member knows that overt threats rarely bring them back in line. Solutions are usually far more subtle: a word from a sympathetic friend here, a missing invitation to a coveted event there. Imagine having Buckingham Palace’s professional staff team as well as friends to help you do that, and make it clear you do not risk receiving the stiff upper lip—which has, for years, been the royal family’s biggest weapon. In Britain, friends as well as family are mindful by the unmentioned threat of being blackballed socially and even professionally, not just by the royals but by those fearful of being associated with damaged goods. The divorced husband of Princess Anne could have sold his story for a fortune, for example, but Mark Phillips kept quiet instead, continuing to build a business around his Olympic gold-medal-winning equestrian career; he has stayed so close to his ex-wife, their two children, and the royal family, in fact, that he lived for years with his new wife in a house on Anne’s country estate.

But that only works against people who have something to lose. The epitome of what happens when one sells out is Sarah Ferguson, aka Fergie. As the irrepressibly fun wife of Prince Andrew, Duke of York, she was feted as a breath of fresh air coming into the royal family. A mere six years after their wedding was aired to an estimated 500 million watchers, she was ostracized by huge swaths of society when photos of her then-secret lover sucking her toes were splashed all over the papers. After her divorce, she could have settled into a comfortable life and rebuilt relations with the royals, but her extravagant lifestyle plunged her into debt. To pay it off, she wrote her autobiography, talked about the Windsors to every media outlet that would listen (and many that would pay), and hawked products in the U.S., including Weight Watchers, to all and sundry. It wasn’t enough. In 2010, her lavish spending again provoked a financial crisis. “From sashes to ashes…” was the Telegraph headline. That year, her desperation was captured on video when she told an undercover reporter that she’d sell access to her ex-husband, then Britain’s special representative for international trade and development, for US$750,000.

Today, she is persona non grata at all but the most personal family events, reportedly on the orders of Prince Philip, the Queen’s husband, who cannot forgive her for the damage she’s wrought, even though his wife, Elizabeth II, is still fond of her. Prince Charles is said to also loathe her. So while Fergie appeared with the Queen to watch racing at Royal Ascot in June, it was on a day when the other senior royals were noticeably absent.

Yet that threat of public displeasure holds no sway over Thomas and Samantha Markle. They live in North America, far away from British societal pressures. Furthermore, they have nothing to lose and apparently welcome the money generated by talking to the media. Thomas has had recent financial problems (he declared bankruptcy in California just two years ago) and lives cheaply in Mexico. Samantha, who is active on Twitter as a “blabberologist,” is writing a book; the working title, The Diary of a Pushy Princess’s Sister, suggests it is a headache-in-the-making for the royal family.

There are easy solutions for the Markle problem. Some critics suggest the family tempest can be resolved if Meghan meets with her father, perhaps during her next visit to her mother in Los Angeles. Maybe Prince Harry, who has never met his father-in-law, would attend as well. Then they could use their face-to-face talk to convince Thomas that a media time-out is the best way to rebuild his relationship with Meghan. But one major concern looms: what’s to guarantee that Thomas, or his confidante-daughter Samantha, won’t blab about that encounter as well?