The one royal who knows how to trump Trump 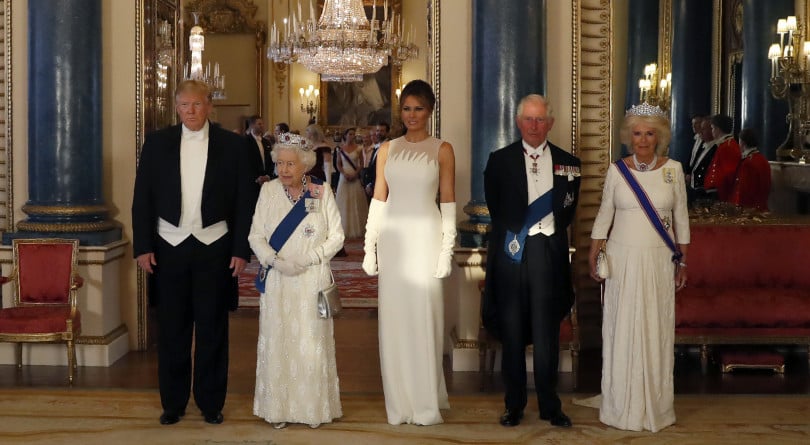 There are two women that Donald Trump fears. Both are strong-willed veterans used to the public eye.

One is a politician: Nancy Pelosi, the powerful Democratic Speaker of the House of Representatives. She is a tough politician who has the measure of the president. She “is operating off a playbook specifically designed for Trump as she hits him where it hurts most, targeting his ego, his courage, his manliness and his sensitivity over his fortune,” Stephen Collinson noted on CNN. He reacts with almost a visceral outrage, indicating how much she’s gotten under his skin. Yet Pelosi is in his comfortable bailiwick, that of hardscrabble politics, where his streetfighter inclinations are often on display. (Those combative skills were in full bloom in his Twitter attack on London Mayor Sadiq Khan, and they will be seen again on June 4, the more political day of this state visit to Britain.)

READ MORE: The Nancy walking all over Trump

The other woman who unnerves Trump is Queen Elizabeth II. If you look at the first day of his state visit to Britain, June 3, the underlying message is that the world’s most powerful politician is clearly intimidated by a tiny woman who is the complete antithesis to him: she has very little political power, never talks to the media, rarely reacts to slights, and has duty to people, nation and the Commonwealth hard-wired into her DNA. She also has something he may never achieve: the respect of the world.

Trump craved the spectacle of a state visit to Britain. Its elaborate, exacting displays of pomp and ceremony are a signature moment of statesmanship, one that his predecessor Barack Obama achieved in 2011. That’s why he brought a huge White House contingent, as well as almost his entire family, including adult children and their spouses.

Yet he and officials in the White House left the itinerary almost exclusively in the hands of surprised Buckingham Palace officials, Washington journalists reported. It’s as though no one wanted to upset the Queen. So, while he and Melania got pride of place at the ceremonial opening, his family and entourage were relegated to a firmly secondary position on the narrow balcony above the garden entrance.

The events of the first day were classic state visit ones, including the ceremonial welcome, private meetings with the royals and a wreath-laying at the Tomb of the Unknown Warrior at Westminster Abbey. He stuck to Elizabeth like glue when they looked at historic items on display from the Royal Collection after a private lunch with members of the royal family.

The take-away? He’s on her turf, and played by her rules. Even the greeting was unusual, as he sublimated his usual tendencies. Trump treats greetings as machismo contests, strongly clasping a person’s hand and then pulling that person sharply towards him. (Emmanuel Macron bested him by returning the favour with such vigour that Trump finally had to give up.)

The Queen is different. As he greeted Her Majesty at Buckingham Palace, he suddenly realized that the 93-year-old was proffering her fingers for her traditional limp shake (she’s shaken a lot of hands and knows exactly how to protect her fingers). So he quickly adapted his handshake as he took hold of the Queen’s fingertips, leaving the top of his hand well above hers. The result looked like an oddly regal fist bump. Trump appeared nervous and subdued while the Queen was smiling, oblivious to any perceived faux pas.

He has “enormous reverence for the monarchy and the Queen,” royal biographer Sally Bedell Smith explained on CNN. “The Queen is a thorough professional. She has known 12 of 13 presidents. She knows how to handle any situation.” (Reportedly after former prime minister Margaret Thatcher and the Queen wore similarly coloured outfits to an event, she had her staff call the palace to create a process to avoid such clashes. “The Queen never notices what others are wearing,” was the legendary public response.)

READ MORE: The Queen is used to thin-skinned megalomaniacs. She can deal with Trump.

For a man known to not read detailed briefing materials, Trump obviously did some homework for his second visit with the Queen in a year. Last July, his inspection of the guard of honour at Windsor could best be described as a train wreck as he awkwardly stepped in front of the Queen and then stopped, looking around, clearly unsure where to go until she was able to get him back in the needed position to inspect a row of troops. The video was instantly infamous.

This time, he knew what to do, though there was one hiccup when he looked surprised (and not pleased) as the Queen indicated that Prince Charles would escort him during the inspection. One could almost see Trump realizing that he wouldn’t get a redo on that infamous moment.

Only during the president’s speech at the state banquet did any conflict arise with his host. It was perhaps unavoidable, given how his political style is so different from the Queen’s belief in everyone working together. Her carefully calibrated speech included three sentences that clearly responded to the President’s “America first” policy of retreating from the international community: “The anniversary of D-Day reminds us of all that our countries have achieved together. After the shared sacrifices of the Second World War, Britain and the United States worked with other allies to build an assembly of international institutions, to ensure that the horrors of conflict would never be repeated. While the world has changed, we are forever mindful of the original purpose of these structures: nations working together to safeguard a hard-won peace.”

Donald Trump, who read his speech carefully and didn’t seem to deviate from his script, responded with equally oblique but clearly intentional language. He talked of how Britain’s fight during the Second World War “ensured your destiny would always remain in your own hands,” a not-so-subtle plug for Brexit, which he openly supports. And, at the end, he made more subtle pro-Brexit, anti-European Union references when he talked of the “common values that will unite us” including freedom, sovereignty and self-determination.

That brief tempest over, everyone got to enjoy a meal that included steamed fillet of halibut with watercress mousse and saddle of Windsor lamb with an herb stuffing. As the Queen knows from decades of dealing with difficult heads of state, food is the best way to avoid open conflict.