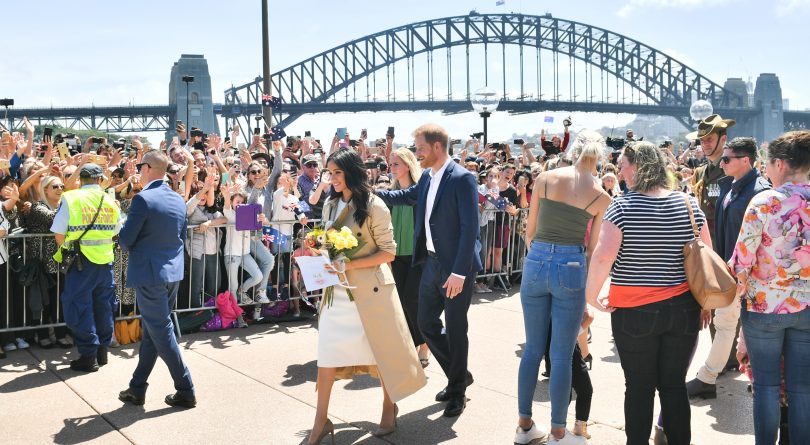 Meghan, Duchess of Sussex and Prince Harry, Duke of Sussex take part in a public walkabout at the Sydney Opera House on October 16, 2018 in Sydney, Australia. The Duke and Duchess of Sussex are on their official 16-day Autumn tour visiting cities in Australia, Fiji, Tonga and New Zealand. (Samir Hussein/WireImage/Getty Images)

The first day of a royal tour can make or break the visit. In an era of instant information, the images from those initial engagements will generate headlines around the world in a way that subsequent days will never be able to repeat. Those events set the tone for a tour, and can decide whether it’s considered a success or failure.

So it wasn’t by happenstance that Prince Harry and Meghan, Duchess of Sussex, spent their first day of a 16-day tour in Australia, Fiji, Tonga and New Zealand being photographed in front of some of Sydney’s most iconic and beautiful backdrops, such the Opera House, or petting one of the nation’s most recognizable animals, a koala. They also spent a lot of time greeting crowds during a big walkabout on the city’s waterfront.

Even Meghan’s outfit was carefully considered, and guaranteed to create headlines and stories. She paid homage to Australia by wearing a white shift dress by local brand Karen Gee—its website crashed under the surge of worldwide attention—and a trench coat by yet another Aussie designer, Martin Grant. And, for the first time, she wore the butterfly diamond-and-gold earrings as well as a gold bracelet that belonged to Harry’s late mother, Diana, princess of Wales.

Harry and Meghan’s packed day of events, which ended with a reception hosted by Governor General Sir Peter Cosgrove, dominated “good news” coverage around the world. The attention was even more intense given the royal couple had just announced they are expecting a baby in the spring. The positive reaction is exactly what they and their staff hoped for.

The day echoed the events in September 2017 when Prince William and Kate, Duchess of Cornwall, arrived in Victoria for the start of their second tour of Canada. Their descent from the plane, carefully shepherding their young children, Prince George and Princess Charlotte, lit up social media. Then the couple (sans tired offspring) went to the B.C. Legislature for an official public welcome by officials, and, perhaps even more importantly, huge crowds. And Kate, in a homage to Canada, wore the Queen’s maple leaf brooch pinned to her dress. The day was a hit, as was the tour.

But it can go wrong. In November 2009, Prince Charles and Camilla, Duchess of Cornwall, arrived in Newfoundland for a tour of Canada. On their first full day in the nation, they travelled to the tiny hamlet of Cupids, which was about to celebrate its 400th< anniversary. The cause was good, but the optics were terrible. “Fifty-seven people—the exact head-count—showed up in the damp and fog,” wrote Rosie DiManno in the Toronto Star. “This is the birthplace of English Canada. And maybe, judging by the teensy crowds for Charles and Camilla, where the institution of offshore monarchy has come to die.”

The sparse crowds and lack of energy in those first days in cold, wet Newfoundland set the narrative—Charles was an unpopular fuddy duddy, and his wife, Camilla, wasn’t winning over Canadians on her first tour to the northern realm. Even worse, endless comparisons were made to the wildly successful launch of a previous tour; back in June 1983, when the weather was better, Charles and his first wife, Diana, began their blockbuster 18-day tour of Canada swarmed by throngs in Newfoundland. Not even bigger, more enthusiastic crowds in central Canada and British Columbia could salvage the latter tour’s reputation.

Charles never repeated his 2009 mistake. All subsequent visits to Canada have been in the warmth of May and June, and the starts are carefully calibrated to ensure good headlines.

So as everyone looks at the images from Meghan and Harry’s first day in Sydney, know that nothing was left to chance. The monarchy hasn’t survived a millennium by sticking its head in the sand. It slowly, cautiously moves with the times. And if a slick, professional entrance is what is needed to jump start a royal tour, then that’s what they will provide.