Prince Andrew's accuser on the BBC: 'There’s only one of us telling the truth'

Virginia Roberts Giuffre, who says she had sex with Prince Andrew as an underage teen, tells her story 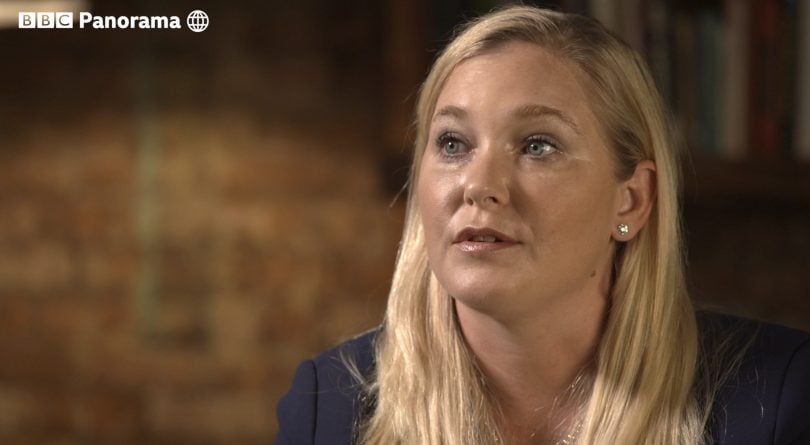 In this image taken from video issued by the BBC, Virginia Roberts Giuffre speaks during an interview on the BBC Panorama program that will be aired on Monday Dec. 2, 2019. (BBC Panorama via AP)

On Monday evening, millions of Britons watched Virginia Roberts Giuffre tell her story on BBC’s Panorama current affairs program. Giuffre (her married name), formerly one of the young girls recruited by the late pedophile Jeffrey Epstein, accuses Prince Andrew of having sex with her when she was an underage 17-year-old. “You never forget the face of someone who has heaved over you,” she said.

Her interview comes two weeks after the royal denied ever meeting her in his own BBC interview. “He knows what happened, I know what happened, and there’s only one of us telling the truth and I know that’s me,” she stated in her first detailed interview with a British broadcaster.

She says her sexual assault happened in 2001 during a visit to London, at the instigation of Jeffrey Epstein and his girlfriend, Ghislaine Maxwell who, in addition to being accused of being Epstein’s procuress of underage girls, is also a long-time friend of Prince Andrew. On March 10, 2001, she says, she and the prince went to Tramps nightclub, where Andrew had a “horrible” sweaty dance with her and then, as they were returning to Maxwell’s home, she was told to have sex with Andrew. “I had to keep him happy because that was what Jeffrey and Ghislaine expected from me,” she said on Panorama.

READ MORE: The only thing Prince Andrew can do now

She’s told her account of that day in the past. In 2011, the Daily Mail published that now-infamous photo of Andrew with his arm around Giuffre along with some basic, non-sexual details of that trip to London. In November, the prince told the BBC he can’t remember that image being taken, and he has suggested it may have been faked. In 2015, Giuffre went public with her allegations regarding Andrew, claiming in a civil filing that “one such powerful individual Epstein forced Jane Doe #3 [Giuffre] to have sexual relations with was a member of the British royal family, Prince Andrew (a.k.a. the Duke of York).” (A few months later, a judge denied her request to join a lawsuit against Epstein and ordered her allegations against Andrew stricken from the record, though without ruling on the veracity of her claims.)

Prince Andrew strenuously denied ever knowing Roberts. “It didn’t happen,” he said in the Newsnight interview on the BBC. “I have no recollection of ever meeting this lady, none whatsoever.” Yet his claims—that he didn’t sweat because of his combat experience during the Falklands War, and that he was at a pizza party that day with daughter Beatrice—were widely ridiculed, especially as he provided no backing for his statements. And as Panorama reveals in its detailed, methodical investigation of the Epstein saga, there are tantalizing nuggets of information still to be found buried in U.S. court filings, including a 2015 email from Prince Andrew to Maxwell: “Let me know when we can talk. Got some specific questions to ask you about Virginia Roberts.” She responded, “Have some info—call me when you have a moment.” As Panorama points out, those quick notes include no denials about the photo or the allegations. Nor are there confirmations.

Yet while that photo is the only physical evidence that Giuffre offers to show bolster her claims against Andrew, what makes her story so believable is that her involvement with Epstein and Maxwell is horrifyingly similar to the allegations of so many other young girls, many of whom were troubled teens when they were drawn into his orbit. By the time she met Epstein in 2000, she’d endured years of being abused, as well as life as a runaway.

“I was just so mentally scarred already,” she said on Panorama. She insists she was trafficked by Maxwell when she was working in a change room at Mar-a-Lago, Donald Trump’s club in Palm Beach, Fla. At the time, she was just getting her life together when, according to Giuffre, Maxwell dangled the hope of training as a masseuse if Epstein liked her; in fact, as Giuffre says, she was being groomed to be sexually assaulted. “These people were my chains,” she recounted on Panorama.

Soon, Giuffre was “being passed around like a platter of fruit” to Epstein’s rich and powerful friends, she told Panorama. In March 2001, one of those friends was Prince Andrew, she says; they had sex three times—in London, New York and the Caribbean. (Epstein, convicted of having sex with an underage child in 2008, hanged himself in August while in U.S. federal detention, under arrest for more sex charges including trafficking; Maxwell has not been charged with any crimes and denies Roberts’ claims of sexual assault.)

Giuffre’s persuasive recounting of what happened to her during her years with Epstein, and what she alleges Prince Andrew did, come two weeks after the royal’s own interview on BBC Two’s Newsnight. That proved to be a futile effort to end years of speculation regarding whether his relationship with Epstein, which started in the 1990s and continued after the financier was a convicted sex offender, was just a misguided friendship (as Andrew claims) or something far more sinister (as Giuffre claims).

But what helped to finally destroy his already tattered reputation was his complete lack of sympathy to the women who, as underage girls, were recruited to perform sexual favours for Epstein and his friends. As well, he showed no remorse for continuing his friendship even after Epstein was a registered sex offender. The furor was immediate and intense. Some 93 hours later, Andrew announced he was stepping “back from royal duties.” As well, at least 15 charities and organizations, including the Canadian Canoe Museum, have cut ties with the royal, with more expected to do the same.

The Panorama interview aired a few hours after Giuffre’s lawyers were in a New York City courtroom for the latest hearing in her defamation lawsuit against former Epstein lawyer Alan Dershowitz, whom she claims abused her. (Dershowitz vehemently denies it.)

And it’s the American justice system where Andrew may be forced to answer questions under oath. “I am willing to help any appropriate law enforcement agency with their investigations, if required,” Prince Andrew said when he announced his retirement. (While the Queen has sovereign immunity from civil and criminal actions, that doesn’t apply to the rest of her family. In 2002, Princess Anne appeared in a courtroom outside Windsor to plead guilty of failing to keep control of her dog, which bit two children.)

Panorama revealed that a lawyer for five of Epstein’s victims wants Prince Andrew to testify as a witness as to what he saw. The next time the royal visits the United States, he may be forced to do so under threat of a subpoena.

In addition to a tangle of civil lawsuits involving Epstein’s victims, there is also a criminal investigation that survived Epstein’s suicide, after which Manhattan U.S. attorney Geoffrey Berman issued a statement: “To those brave young women who have already come forward and to the many others who have yet to do so, let me reiterate that we remain committed to standing for you, and our investigation of the conduct charged in the indictment—which included a conspiracy count—remains ongoing.”

Based on all the court filings by Epstein’s victims, as well as news investigations, the largest target to a criminal prosecution is likely Maxwell.

She could be key to explaining not only Epstein’s criminal activities but also the enduring mystery of how Epstein gained his fortune and maintained his lavish lifestyle, which included high-profile friends including Bill Gates, Prince Andrew, Bill Clinton and Donald Trump. Intriguingly, federal officials raided Epstein’s New York mansion after his arrest, reportedly taking away lots of records.

Today, Virginia Roberts Giuffre is a mother of three living in Australia. But she’s determined not to let anyone forget what happened in those exclusive homes. How were powerful people allowing this to happen, she rhetorically asked on Panorama. She doesn’t buy their excuses, including those of a member of the royal family: “I’m calling BS on this because that’s what it is.”