One of the latest figures in the spotlight surrounding the royal wedding is Jessica Mulroney, the bride-to-be's friend and confidant 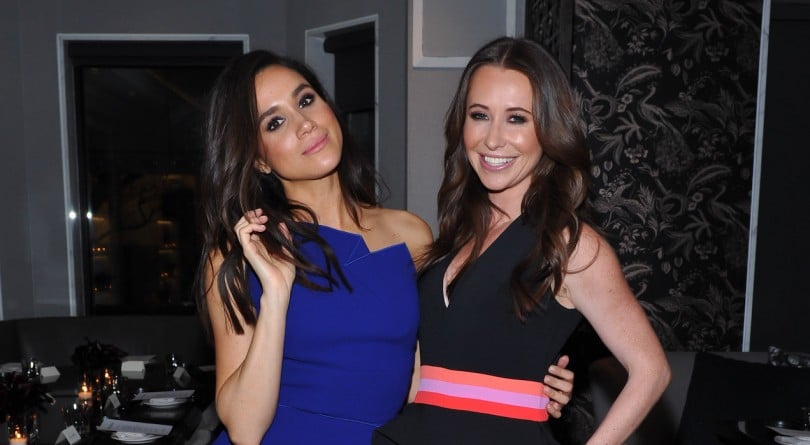 It’s royal wedding season, which means every person, place and unconventional confection selection associated with the big day is making headlines around the world. One of the latest figures in the spotlight is Jessica Mulroney, Meghan Markle’s Canadian bestie and trusted confidant whose behind-the-scenes influence may be a lot more significant than most of us realize. But who is she? How does she know Markle and are they really that tight?

Who is Jessica Mulroney? I feel like I’ve heard of her before.

Until recently, Jessica was best known as the less famous spouse of Ben Mulroney, son of ex-Prime Minister Brian Mulroney and — as the host of Your Morning and eTalk — our nation’s most famous talking haircut. (That’s not a dis. The guy has seriously great hair.) But if Jessica, who was born in Montreal and is a member of the Brownstein family behind Browns Shoes, wasn’t exactly a household name pre-Meghan Markle, she was busy building up a personal brand and multi-hyphenate job description. At last check that’s: wedding planner slash celebrity stylist slash brand consultant slash Instagram influencer. Last year she did a bunch of ads for Metro grocery stores and she is a regular guest on Cityline, where she has done fashion segments tied to her relationships with Meghan Markle and Sophie Grégoire Trudeau. Neither Meghan nor SGT is an “official” client, but Jessica has been the sartorial mastermind behind many of their most memorable fashion statements.

For example, the white Sentaler coat that Sophie famously wore the day her hubby was sworn in as prime minister was a Jessica select. Same with the “funky” purple fedora she wore while meeting Kate Middleton back in 2016 (we said memorable, not always perfect). As for Meghan, Jessica’s Canadian outerwear savvy likely has a lot to do with Meghan Markle’s seemingly endless stream of so-called power coats. And Jessica, who works with Kleinfeld Bridal, may be helping her good pal in making the most significant fashion decision of her life — rumour has it she has flown to London more than once to attend pre-wedding bridal fittings.

When did Jessica Mulroney first become friends with Meghan Markle?

The pair met at some point after Meghan moved to Toronto to film Suits in 2012 and well before she met her Prince Charming. So while Jessica has certainly gained fame and Instagram followers based on her proximity to the royal couple, this was not a case of calculated social climbing. A quick trip down memory lane (i.e. Jessica’s Insta feed) shows that the two women were spending a lot of time together around the time Meghan met Harry, including a BFF’s Italian getaway with its very own hashtag: #MJxItaly.

OK, so Meghan and Jessica were friends before Prince Harry, but how do we know they’re still tight?

In a recent biography of Prince Harry, royal reporter Katie Nicholl says Jessica and Ben are part of Meghan and Harry’s “inner circle.” This awesome foursome was cemented shortly after the media found out about Meghan and Harry’s relationship in the fall of 2016 when the couple, who were in Toronto at the time, hid out at the Mulroneys’ midtown hometo avoid overeager photographers. During this visit (per Nicholl’s inside source), Ben shared a story about how Princess Diana once came up to his nursery during a political soiree at 24 Sussex.

Does that mean they’ll get invited to the royal wedding?

Invited? While Meghan ultimately chose not to have a maid of honour, Vanity Fair reported that Jessica is the royal couple’s “secret wedding planner.” There have even been reports that Jessica has made trips to London to attend dress fittings. So the question is not whether she and Ben will be invited, but how significant (and how public) their role will be.

We received a major clue this week when Kensington Palace confirmed the Mulroney children, four-year-old Ivy and seven-year-old twins Brian and John, will be part of the royal wedding party as a bridesmaid and as page boys, respectively. Ivy is already a spokes-toddler for Birks jewellery (a former client of Jessica’s), so the spotlight is familiar territory.

Any clues about what Jessica will be wearing?

In most wedding’s JM’s presumed status as matron of honour would mean an unflattering sack in a universally unflattering sandy lilac colour, but this not most weddings. Which is why the British press is already speculating that Jessica may upstage the bride on her big day.

Unlikely, but if someone’s going to “pull a Pippa,” we’d love it to be a Canadian!

With files from Rachel Chen