Who's invited to Prince Harry and Meghan Markle's wedding?

From a controversial estranged royal to a select few Markles, the invite list for the wedding of Prince Harry and Meghan Markle has raised eyebrows and hackles 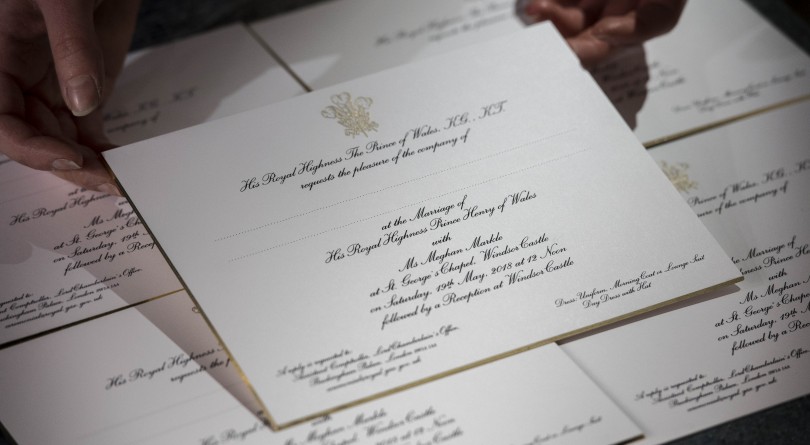 Only 600 guests will get to watch firsthand the most watched event of the year: the royal wedding of Prince Harry and Meghan Markle on May 19. It may be an ultra-exclusive nuptial at the most exclusive of addresses—St. George’s Chapel inside Windsor Castle—but it will also involve getting up very early. They’ll start arriving at the gates of Windsor Castle at 9:30 a.m., clutching their invitations (and identification), dressed in their finest, for a service that starts at noon.

The 600 invitations were mailed in March. Each stiff card was issued on behalf of the father of the groom, Prince Charles, who “requests the pleasure of the company of” the invitee. The trans-Atlantic nature of this wedding (British groom, American bride) extended to the invitations themselves. “Using American ink on English card, the invitations are printed in gold and black, then burnished to bring out the shine, and gilded around the edge,” a royal tweet explained.

Perhaps it’s easiest to first discuss about who isn’t coming: politicians and the vast majority of the Markles.

First, the exclusion of politicians. In early April, a Kensington Palace spokesman announced: “It has been decided that an official list of political leaders, both U.K. and international, is not required for Prince Harry and Ms. Markle’s wedding. Her Majesty’s Government was consulted on this decision, which was taken by the royal household.”

Sure, it’s a small venue by royal standards (some 1,900 went to the 2011 wedding of Prince William and Kate Middleton in Westminster Abbey), and Harry isn’t a future king like Prince William, whose wedding was a major political event; Harry is sixth in line to the throne, and sure to fall further down the line of succession. But there’s another reason: Donald Trump. No, the American head of state wasn’t expected to be invited, but the self-absorbed politician could have made life difficult for Britain if his predecessor and personal friend of Harry, Barack Obama—whom Trump openly loathes and whose governmental decisions he is reversing—was invited. And that could have posed a problem for post-Brexit Britain, which needs a trade agreement with the United States. So avoiding all politicians neatly prevents any potential Trump situation.

Then there are Trump’s fellow Americans, the extended Markle clan. On April 11, her half-sister, Samantha Grant tweeted, “The Markle family is looking forward to our wedding invites. No one has one yet.” They are still waiting. It’s no surprise given they are a tangle of half-siblings, multiple divorced spouses and their children who have repeatedly blabbed salacious details of their lives, and Meghan’s, to the media for months and months. (Read more from Maclean’s about Meghan’s family.)

READ MORE: No matter who you are, you’ll learn something from Maclean’s massive royal wedding FAQ

As for who will take a seat in the beautiful medieval St. George’s Chapel, the most obvious invitees are members of Harry’s family on both his father’s and late mother’s sides. Diana’s three siblings will be there and her oldest sister, Lady Jane Fellowes, will say one of the readings. A large contingent of Spencer cousins is expected. For Windsors, as a rule, standing on the balcony of Buckingham Palace after the Trooping the Colour qualifies one for a standing royal invitation. Even Princess Michael of Kent is going, and she’s definitely not on the bridal couple’s BFF list after a series of racial revelations including wearing a blackamoor brooch to a Christmas luncheon where Meghan was introduced to the Windsors, as well as the revelation in Vanity Fair that she kept two black sheep named after tennis stars Venus and Serena Williams in her former country home.

That could be particularly awkward as Serena is expected be there. While the tennis star was evasive during a TV interview—”I don’t know, I think it’s during one of the tournaments, I’ll see if I can make it”—it’s hard to imagine she won’t be there with her husband Alexis Ohanian, the co-founder of Reddit. She and Meghan have been friends for years, as the actress wrote on Tig, her defunct lifestyle website: “She quickly became a confidante I would text when I was traveling, the friend I would rally around for her tennis matches, and the down-to-earth chick I was able to grab lunch with just a couple weeks ago in Toronto.”

Other headline-generating couples include George and Amal Clooney. The superstar duo is now based in England, where Amal Clooney is a top international human rights lawyer. Her hairdresser, Miguel Perez, spilled the beans that he’s styling Amal’s flowing locks for the wedding.

Victoria Beckham is a go-to fashion designer for Windsor women, including Meghan—though she’s publicly denied being the designer of Meghan’s dress. David Beckham, her retired soccer phenom of a husband, has been a firm favourite of the royal family for years. They attended William and Kate’s wedding, so it’s all but certain they’ll go this one as well.

One of the few to openly confirm she’ll be in Windsor on May 19 is Priyanka Chopra, the star of Quantico, who has been a close friend of Meghan’s for years. “I really do think that their love story, which is a really good love story for the modern generation, has made a cynical world sit up a bit,” she told Hola USA.

Other actors are sure to be there as well, including the leading stars of her Toronto-based TV series, Suits. Royal historian Hugo Vickers told the Daily Mail that he recommended his fellow lay stewards of St. George’s Chapel “get Netflix and watch Suits, so they know who everyone is at the wedding.” One of those faces will belong to the man who played her on-screen love, Patrick J. Adams. After her engagement was announced to Prince Harry, Adams posted a congratulatory message onto Instagram: “Playing Meghan’s television partner for the better part of a decade uniquely qualifies me to say this: Your Royal Highness, you are a lucky man and I know your long life together will be joyful, productive and hilarious.”

The musical industry should be well represented. Elton John recently cancelled two concerts on the wedding weekend, apparently for a “scheduling conflict.” The singer and his husband, David Furnish, who were close to Harry’s mother, the late Diana, Princess of Wales, attended William and Kate’s wedding, and it’s a sure thing that they will be in Windsor as well. Others reportedly in the running to perform at the wedding evening party include the Foo Fighters and Ed Sheeran. Their appearance at the chapel could tip the betting as to whether they’re singing that night.

While the crowned heads of Europe and their heirs aren’t automatically invited, one royal who is expected to be there is Prince Seeiso of Lesotho. He co-founded the charity Sentebale with Prince Harry in 2004. Both princes are very actively involved the charity, which works with grassroots organizations to help the most vulnerable children in Lesotho and Botswana, many of whom are both extremely poor and have HIV/AIDS.

Only a few Canadians will witness Harry and Meghan pledge their vows. Among those are Ben and Jessica Mulroney, whose Toronto home served as a hideaway for Meghan and Harry when they were dating. He’s the host of CTV’s Etalk and Your Morning shows, while she’s a power fashion stylist who has been advising Meghan on her wedding outfit. (Their daughter Ivy is an odds-on favourite to be a bridesmaid.)

The other Toronto-based couple sure to be at the wedding is Galen and Hilary Weston. He’s the third richest man in Canada (owner of Loblaws and Shopper’s Drug Mart) while she’s the former lieutenant-governor of Ontario. Most importantly, the Westons are close friends with the groom’s father, Prince Charles, and grandmother, Queen Elizabeth II. They’ve attended every royal wedding since the 1980s. In addition, their connection to Windsor are deep: Hilary Weston is a trustee of the St. George’s Chapel restoration fund, and was honoured in 2015 with a CVO (commander of the Royal Victorian Order). Their English country home is Fort Belvedere, located a short distance from Windsor Castle in the Windsor Great Park. The home, leased from the Crown Estate, once belonged to King Edward VIII; it’s where he courted Wallis Simpson and where he abdicated in 1936.

One of the most controversial royals since Edward VIII is Sarah Ferguson, the divorced wife of Prince Andrew, duke of York. Her scandals, including toe-sucking infidelities as well as being caught on video by an undercover reporter offering access to her ex-husband in exchange for a large fee, have been making headlines for decades. Though she hasn’t been at the last three royal weddings, she’s expected to be at this one, as she and her daughters, Princess Beatrice and Princess Eugenie, have always been close to Harry.

And that could set up the most interesting interpersonal dynamic at the wedding, since Sarah is loathed by Prince Philip, Queen Elizabeth II’s husband. He blames her and her embarrassing antics for harming the royal family’s reputation and avoids being in the same place as her whenever possible. He may be able evade being near Sarah at this wedding, but the conflict won’t go away.

In October, the family will return to St. George’s Chapel for another royal wedding—this time, between Princess Eugenie and her fiancé Jack Brooksbank. If he attends, Prince Philip will find evading Sarah Ferguson, the mother of the bride, a lot harder than at the nuptials of Prince Harry and Meghan Markle.