Why Prince Harry and Meghan Markle went to Ireland 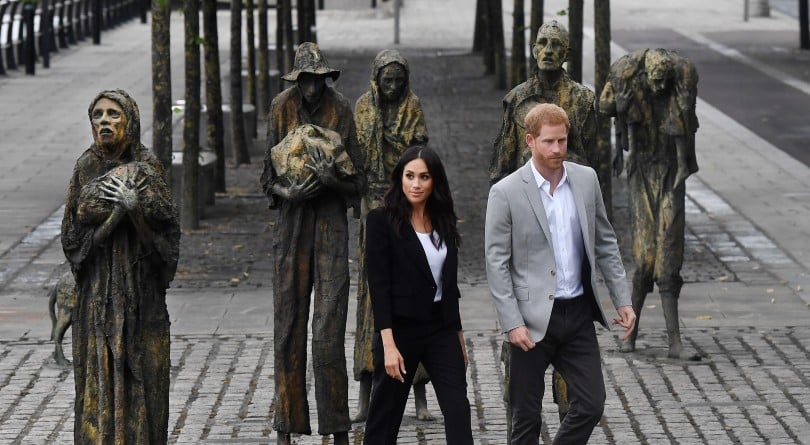 Prince Harry, Duke of Sussex, and Meghan, Duchess of Sussex, visit the Famine Memorial at Custom House Quay on the second day of their official two-day royal visit to Ireland on July 11, 2018 in Dublin, Ireland. The statues commemorate the Great Famine of the mid-19th century, during which a million people died and a million more emigrated. It is the royal couple's first foreign trip together since they were married earlier this year. (Charles McQuillan/Getty Images)

Freshly married Prince Harry and his bride, Meghan, Duchess of Sussex—arguably the hottest members of Britain’s royal family right now—have completed a quick 24-hour visit to the Republic of Ireland as their first official trip as newlyweds. The destination was chosen deliberately: Government and palace officials know that they are incredibly popular, and that a huge coterie of media would record every moment of their first official duties outside Britain. So their quick jaunt to Dublin, “at the request of Her Majesty’s government,” is designed to shine a positive spotlight to both nations while reinforcing their neighbourly relations in the lead-up to Brexit, which could see customs controls reintroduced on the border with Northern Ireland.

It’s a trip that also comes less than a month after a four-day visit by Harry’s father and stepmother, Prince Charles and Camilla, Duchess of Cornwall, to both parts of the Irish isle—their fourth trip in recent years, to “highlight the essential partnership and friendship between the two nations, as well as the deep connections between their people,” the official press release stated.

It’s a remarkable moment to see how far things have come.

Just a few decades ago, the first two paragraphs would have been unthinkable. Centuries of of tensions over British rule over the majority Catholic island exploded in Ireland’s bloody war of independence that led to the division of the island into a republic in the south and a religiously divided north that remained a part of Britain. In 1968, simmering tensions between Protestants and Catholics boiled over in Norther Ireland into three decades of inter-communal violence, terror attacks by paramilitary forces both in the province and the British mainland, harsh military measures and seemingly no end to the bitter sectarian divide. More than 3,500 people died, including the Queen’s cousin, Earl Mountbatten, who was killed in a 1979 IRA bombing, along with one of his daughter’s elderly mother-in-law, his grandson, and a local teenager. In the end, a lasting ceasefire was established to allow politicians to negotiate what would become the Good Friday Agreement in 1998, which allowed for the province’s devolved system of government.

Still, when they did happen, royal visits to Northern Ireland would take place with no advance notice and high security. During the 1977 celebrations marking her Silver Jubilee, or 25 years on the throne, the Queen had to sleep on a Royal Navy ship off-shore and was helicoptered to each event.

But since the peace process was launched, restrictions are noticeably more relaxed. Harry and Meghan mixed standard royal duties—a party at the British ambassador’s residence plus a visit to the Irish president—with interests dear to the newly married couple, including talking to those who “are involved in community outreach projects that encourage the use of sports for social good” as well as a “global network of free computer programming clubs for young people that launched in Cork,” according to the agenda. And in June, Prince Charles and Camilla walked through the streets of Omagh, marking the 20th anniversary of the devastating bombing that killed 29 by meeting survivors and families of the victims of the attack by a splinter group of the Provisional Irish Republican Army unhappy with the Good Friday Agreement.

Along with apolitical events are moments that acknowledge Britain’s controversial and often violent history on the island. Harry and Meghan will look at artifacts from the Bloody Sunday massacre of unarmed Northern Irish Catholics by British soldiers in 1972 during a museum tour, and then go to the memorial to the Irish Famine that killed millions in the 1840s.

Omagh remembered. The bomb explosion twenty years ago which killed more people than any other single event in The Troubles. A visit to the town by Prince Charles & Camilla today. He was last here in 1998 when grief was very raw… https://t.co/iI1ebuFU84 pic.twitter.com/USWF2wQtC8

Why the change? Peace, of course—not to mention the healing effect of time after the end of the Troubles, which used to engulf Northern Ireland. But it’s also due to a concerted effort by the royal family, headlined by Queen Elizabeth II herself.

In 2011, she and Prince Philip undertook a historic state visit to Ireland, just ahead of Prince William and Kate Middleton’s royal wedding. It was the first tour by a British monarch to what is now the Republic of Ireland since the tour of her grandfather, King George V, a century before. Not only did the Queen bow at the Garden of Remembrance, which honours those killed by the British in the battle for Irish independence, but she also spoke Irish at the start of a speech at a state dinner where she diplomatically paid homage to the past. “It is a sad and regrettable reality that through history our islands have experienced more than their fair share of heartache, turbulence and loss. These events have touched us all, many of us personally, and are a painful legacy. We can never forget those who have died or been injured, and their families,” she said, referring, in part, to the murder Earl Mountbatten.

She went on: “To all those who have suffered as a consequence of our troubled past, I extend my sincere thoughts and deep sympathy…With the benefit of historical hindsight we can all see things which we would wish had been done differently or not at all.”

Both sides agree that it was successful beyond all expectations. Politician Gerry Adams, president of Sinn Féin, praised her “sincere sympathy.” The next year, as a direct result of that trip, Martin McGuinness, a Provisional IRA commander turned Sinn Féin leader, shook the Queen’s hand at a public event, a moment that once seemed impossible.

READ MORE: Queen Elizabeth II is 92—and yet her workload seems to be increasing

With each royal visit, the once-fraught relationship deepens between the two nations. “On this visit we…celebrate just how much unites us,” said Prince Harry at a reception at the British ambassador’s residence in Dublin. “We share common values; culture, business links, family ties, and possibly a similar sense of humour…I have the greatest confidence that the friendship, collaboration and mutual understanding that our two countries have built up over the years will endure and it will grow.”

Near the end of their whistle-stop visit, Meghan and Harry saw the Book of Kells, the 9th-century illuminated manuscript of the Gospels, which holds particularly apt lessons for the current status of Irish-British relations. As it says in the Book of John: “My command is this: Love each other as I have loved you.”