The touchy-feely royals risk looking like mere celebrities, which is not part of their actual job—and that could have consequences down the road, even amid all their good work 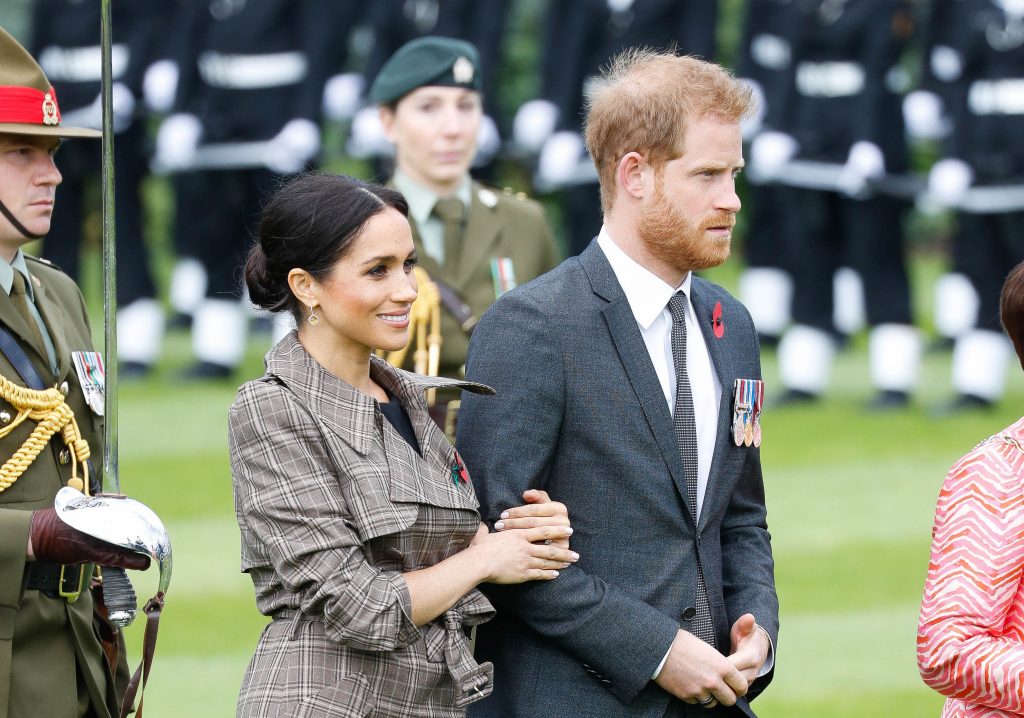 If there is one image of Prince Harry and Meghan that exemplifies their 16-day royal tour of Australia, Fiji, Tonga and New Zealand, it is of them holding hands: clasped while they strolled barefoot on Bondi beach in Sydney, gripped as they met adoring crowds in Auckland, New Zealand, and cradled at official receptions in Fiji and Tonga.

And it’s not just holding hands. The last 16 days have seen an onslaught of images showing Harry and Meghan snuggling, stroking each other’s backs, hugging, fondling their hair, even playing with a royal ear. There’s even the trademark Sussex double clasp, by which Meghan reaches her free hand in front of her to hold his arm above their entwined hands (more rarely, Harry takes the more discreet route of extending his arm behind back to enfold their hands with his second one). It can be awkward, such as when they kept holding hands as they clambering down windswept aircraft stairs in Wellington, New Zealand even while Meghan used her free hand to push her short skirt down and Harry used his to keep his suit jacket closed.

But their increasing reputation for adorable public displays of affection has dominated the headlines—irking some. “Yes, there is such a thing as too much PDA,” said one royal blogger who has kept a close watch of the Harry and Meghan tour, but wishes to remain anonymous because she doesn’t want to deal with the inevitable negative reactions from Meghan fans to her comments (tellingly, no one who talked to me on this topic wanted their names used). “It’s now starting to come across as clingy, needy and insecure and more importantly actually quite unprofessional.” Another veteran watcher added: “It is jarring. We just have not seen this before in the royal family.”

Those observers aren’t alone. When the Daily Mail noticed that complaints were piling up on the Mumsnet parenting site, it blared: “ ‘Touchy-feely’ Harry and Meghan should save their tactile royal tour displays for when they are in PRIVATE tutting moms moan—but fans insist their affectionate behaviour is ‘lovely.’ ” A commenter posted, “And it’s not just holding hands is it—it’s clinging to the point where they look awkward as they only have one free hand each—bit like a three-legged race.”

It leads to a question that might seem petty, but is worth asking: is there such a thing as too much royal PDA? Whether or not you agree with the couple’s choice to be so public with their affection, the criticism of it speaks to real issues that go beyond mere snark and scolding.

READ MORE: It’s been the year of Meghan Markle—and what a year it’s been

No one is negating Harry and Meghan’s love for each other, nor the fact that they are free to show it in public. After all, holding hands wouldn’t and shouldn’t cause a blip of objection were they two ordinary folk. But the thing about being a royal is that it is a job, and it’s one that expects, even demands, a level of propriety increasingly uncommon today. It’s rare for British royals—or any royals for that matter—to be so public in their sustained, and distracting, displays of physical togetherness when on official engagements. Prince William and Kate, Duchess of Cambridge, often laugh and joke at engagements, but aside from a guiding hand on a back here or the occasional hand-hold there, they haven’t displayed as many physical displays of affection in seven years of marriage as Meghan and Harry have on this 16-day tour. It’s partly their more conservative natures, but it also allows attention to stay focused on their work.

As much as fans of the younger royals applaud their relaxed informality—hugging children, donning macaroni necklace gifts, high-fiving screaming school kids, posing for an illicit selfie—there also needs to be a recognition that those same royals aren’t working for themselves, nor are they simply famous for being famous. Their job, especially on these royal tours, is to support the monarch who, as the royal family’s website states, “acts as a focus for national identity, unity and pride; gives a sense of stability and continuity; officially recognizes success and excellence; and supports the ideal of voluntary service.” And those supporting roles require some level of the established formality that is inherent with being a full-time working member of the House of Windsor. That separation from ordinary folk is part of the monarchy’s survival mechanism, after all: “Mystery is its life. We must not let in daylight upon magic,” journalist Walter Bagehot famously wrote.

Without it, Harry and Meghan may come to be seen by the public as mere celebrities, whose actions can go in and out of favour with a change in the infotainment winds. And by being constantly joined at the hip, they appear to be setting themselves up for a swarm of negative headlines when they, as they surely one day will, undertake a public engagement where they don’t hold hands or gaze adoringly at each other. At that moment, the inevitable “Is there trouble in paradise?” stories will blanket social media, and bloodthirsty speculation on the state of their marriage will kick into high gear.

Meanwhile, Meghan has actually been excelling in her new role, establishing herself as a royal with a powerful voice and continuing to bolster her bona fides as a high-profile feminist by giving several powerful speeches focused on female empowerment during her debut royal tour. “Women’s suffrage is about feminism, but feminism is about fairness,” the newest royal said in a speech marking the 125th anniversary of women getting the vote in New Zealand, the third official speech she’d undertaken in five days, an extraordinarily fast plunge into public speaking for a new member of the House of Windsor. “Women’s suffrage is not simply about the right to vote for women but also about what that represents: the basic and fundamental human right of all people—including members of society who have been marginalized, whether for reasons of race, gender, ethnicity or orientation—to be able to participate in the choices for their future and their community.”

Her speech at the University of the South Pacific in Fiji depicted her as down-to-earth, someone who knows firsthand about struggling to get an education. “It was through scholarships, financial aid programmes and work-study where my earnings from a job on campus went directly towards my tuition, that I was able to attend university,” said the Northwestern University double-major in theatre and international relations.

She’s made clear, too, that she knows how to fight for what is right, and she’s putting her newfound royal status behind those who want to do the same. She advocated for women and girls in developing nations such as Fiji to get the education they “have the right to receive,” because “providing them with access to education is the key to economic and social development”—then followed up with action, announcing that a Commonwealth organization had given grants to allow two Fijian universities to set up workshops that will empower female faculty members to “encourage others to follow in their footsteps…and ensure women are provided with the training and skills to operate effectively in their roles, and those with leadership potential are given the opportunity to be heard and recognized at the most senior level.”

You’d be forgiven for not knowing all that, though, as so much attention has been devoted to her and Harry’s omnipresent royal PDA—an issue with media coverage, to be sure, but also an issue the pair have brought on themselves.

Their tour will likely end on Oct. 31 as it started: with Prince Harry and Meghan holding hands. But that question remains: will their royally affectionate style of public life help or hinder Meghan as she carves out her own role as a royal? It’s a touchy subject, but the answer might matter to the royal family more than you think.