Will Elizabeth II be the last monarch of a United Kingdom?

First Her Majesty got embroiled in the politics of Brexit. Now it threatens the breakup of her domain. 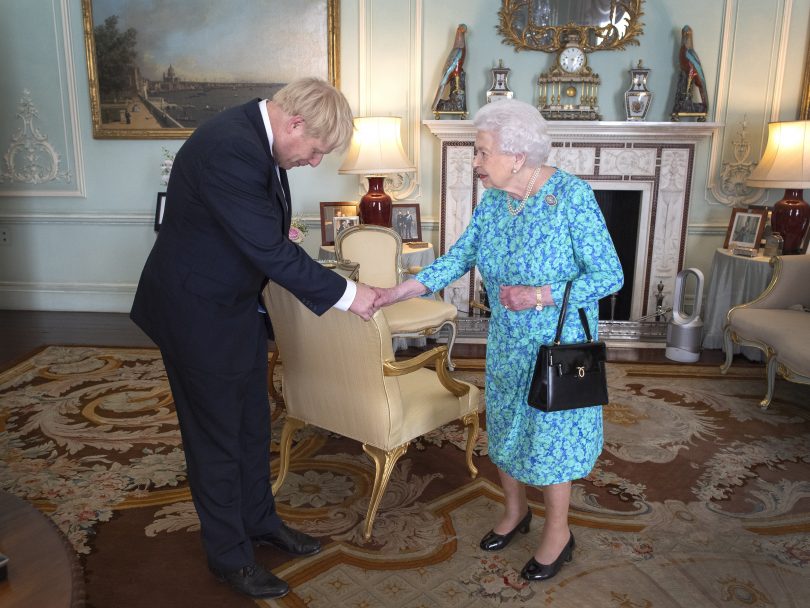 Queen Elizabeth II has spent the 67 years of her reign scrupulously adhering to constitutional precedence and advice when it comes to her role as sovereign of the United Kingdom. From the time of her first prime minister, Winston Churchill, to her 14th, Boris Johnson, she has stayed as far above the hurly burly of politics as is possible.

Now, she’s being dragged down into the political Gordian knot that is Brexit. On Sept. 24, the Supreme Court unanimously ruled that Johnson’s request to the Queen for a super-long prorogation of Parliament, which she approved, was “unlawful.” In effect, the justices declared that Johnson lied to his boss in order to play out the political clock before his government’s Oct. 31 deadline to leave the European Union.

Constitutional experts put the blame squarely on the PM, not the monarch: “Her Majesty is entirely protected and untouched in any negative sense,” Philippe Sands, a professor of law at University College London, told the Daily Express. Indeed, the Supreme Court noted that “in approving the prorogation, Her Majesty was acting on the advice of the Prime Minister.” Yet, it shone a harsh spotlight on the Queen and her powers. As Jonny Dymond, the BBC’s royal correspondent, wrote, “She understands that her position is dependent on her staying deep in the shadows of government. But now daylight has flooded in.”

READ MORE: All hail the Queen’s favourite (hint, she’s not Meghan or Kate)

If that weren’t enough, the 93-year-old monarch faces the possibility that the moment when Britain exits the European Union may also start a countdown to the end of her kingdom.

It is a country on edge. Advertisements blare the need for supplementary health insurance to travel to the continent. Europeans worry about being denied residency in Britain. In a café in the historic city of Chester, two women loudly blame Brexit for the sudden lack of au pairs and cleaners.

Opinions are sharply divided between Remain or Leave. Upon hearing a Canadian accent, people start talking about what side they are on and what they think will happen next.

Alan Salkeld voted to leave, like many in Lancaster, a former hub of British manufacturing. “I have no fears whatsoever,” he says, certain that everyone will continue to trade with Britain, even though he’s stopped buying French products to protest President Emmanuel Macron’s tough language towards the Conservative government.

Travel two hours south by rail to Greater London, which voted overwhelmingly to remain in the European Union, and it’s easy to spot the frayed nerves. At a bar, two friends are pessimistic. “We’ve lost everything, we just don’t know it,” Mark says. After years in Britain, fellow IT consultant Fernando, a Spanish national, is looking for a job in Europe. “The atmosphere has changed in the last few years,” he said. (Neither man wanted their last names used because they work for a major international firm.)

RELATED: Life after Queen Elizabeth II: What will ‘the inevitable’ bring?

Ask about whether the kingdom will remain united after Brexit and reactions are equally mixed, even among those who have spent years studying the monarchy and Crown.

“I think [Queen Elizabeth is] very worried. She’s seen it all before. Suez, major political upheavals going into the European Union,” says royal author Robert Hardman. “She is the U in U.K. That is her job. That is being sorely tested.”

The Queen doesn’t give interviews and she doesn’t write opinion columns. Yet read her public comments in 2019 and her unease is apparent—concern that the nation is becoming increasingly split, both politically and socially, over the fraught Brexit situation, and fear that Britain’s links to its allies and neighbours are fraying.

“She’s treading very carefully on the substance,” says Hardman, who has written extensively about the Queen, her reign and foreign relations. “The tone of the debate she can talk about, voice an opinion on.”

In January, while still on her Christmas break in rural Norfolk, Elizabeth II laid down a regal marker amid tea and cakes at the meeting of the local Women’s Institute. “Of course, every generation faces fresh challenges and opportunities,” she said. “As we look for new answers in the modern age, I for one prefer the tried and tested recipes, like speaking well of each other and respecting different points of view; coming together to seek out the common ground; and never losing sight of the bigger picture. To me, these approaches are timeless, and I commend them to everyone.”

Ostensibly it was a speech for the 100th anniversary of the Sandringham branch, of which the monarch has been a member since 1943. But the allusions to the growing Brexit crisis weren’t hard to find.

READ MORE: The Queen is used to thin-skinned megalomaniacs. She can deal with Trump.

In early June, the Queen responded to U.S. President Donald Trump’s nationalist, isolationist rhetoric during her speech at a state banquet at Buckingham Palace in his honour. Again, she was talking about unity, this time focusing on international institutions: “After the shared sacrifices of the Second World War, Britain and the United States worked with other allies to build an assembly of international institutions, to ensure that the horrors of conflict would never be repeated. While the world has changed, we are forever mindful of the original purpose of these structures: nations working together to safeguard a hard won peace.”

And at the end of June, she spoke again, this time at the 20th anniversary of the Scottish Parliament in Edinburgh: “It is perhaps worth reflecting that at the heart of the word “Parliament” lies its original meaning: a place to talk … But of course it must also be a place to listen—a place to hear views that inevitably may differ quite considerably, one from another—and a place to honour those views.”

Her ability to influence opinion through seemingly innocuous statements should not be underestimated. Recently, former PM David Cameron revealed that he asked the Queen for help near the end of the 2014 Scottish independence referendum, when the Leave campaign took the lead in polls. What exactly he wanted her to say is unknown but a week later, on leaving church near her Balmoral estate in Scotland, she told a well-wisher, “I hope people will think very carefully about the future.”

Her technically neutral comment was designed to be heard. As the Daily Express’s royal correspondent, Richard Palmer, explained recently, “There had been stories about Downing St putting pressure on the Queen to intervene. BP [Buckingham Palace] asked PA [Press Association] to get down to the church when journalists were normally discouraged. Everyone knew it was a set up.” Royal photographer Tim Rooke concurs, “Normally no one is allowed at the entrance to Crathie Kirk [church] everyone stands further down the hill and does car shots. Except this time.” In the end, Scotland voted 55 percent to 45 percent to stay in the United Kingdom.

Monarchs have one overarching goal they must reach for their reigns to be deemed successful: to leave the throne stronger and more secure to their successors. This may not be possible for the longest reigning British monarch, who now faces an existential threat to her kingdom.

For Crown expert Philippe Lagassé, an associate professor at Carleton University, the concern isn’t just whether the U.K. leaves the European Union but the second order effects. “There will be significant institutional shake-up and the long-term effects aren’t known.” For what’s to stop disgruntled parts of the country that didn’t want to leave the EU from themselves holding referendums to leave the U.K. “That her United Kingdom would be disunited is not a legacy you want to leave,” he says.

Hardman agrees. “It has to be one of the biggest threats to her kingdom in her lifetime,” he says. The polarization, and fairly hysterical rhetoric on all sides “feels a bit mad.” That “large parts of her country are hurling gratuitous abuse at each other….has to be a worry.”

In the 2016 Brexit vote, Scotland voted heavily to remain part of the EU. In late July its first leader, Nicola Sturgeon, wrote to PM Boris Johnson that his determination for Brexit means it is “essential that in Scotland we have an alternative option.” And, for her nationalist party, that means a second referendum. Though a current poll says only 41 percent of Scots want to leave the U.K., that number could quickly change depending on what happens after Brexit.

While Hardman suspects Scotland won’t leave the country in the next 10 years—“the last [leave campaign] was predicated on oil, now that’s gone”—he thinks it may get even greater autonomy.

But if Scotland does vote to leave the United Kingdom in a second referendum, then would Elizabeth II remain its Queen? That’s not clear.

More referendum dominoes may fall. Northern Irelanders are worried about the ramifications of imposing a customs border on its now-open relationship with the Republic of Ireland. Polls, including an online one taken within the last month by Lord Ashcroft, a former deputy chairman of the Conservative Party, show a province evenly divided about leaving the U.K. for the Republic of Ireland.

It’s not inconceivable that both Scotland and Northern Ireland depart, shattering the United Kingdom, and leaving just a rump English monarchy. Then, as the nation and its Crown fall in international importance, it could lead to cascading effect as some of the Queen’s other 15 realms feel the need to move on, including Canada, Lagassé suggests. “We don’t know how all these things fit together,” he says. “I think it will all just keep going, but I’m less sanguine about that.”

Hardman is more optimistic, though he points out that her heir, Prince Charles, is “every bit concerned” as the monarch. There is a real sense that once the political fight is over, then the royals will “apply bandages and make it feel all better,” he says.

It’s not like the Queen hasn’t been through massive political change before. She served during the Second World War and reigned through a significant period of decolonization, the effects of which are still felt today throughout the Commonwealth that she helped build in the aftermath of the end of the British Empire. She also dealt with decades of violence during the Troubles in Northern Ireland.

As Lagassé notes, “She has lived aware of the risks of instability in a way current politicians aren’t.” Those decades of regal experience will come in handy.