Will Meghan Markle go glam for her first appearance with her new baby? 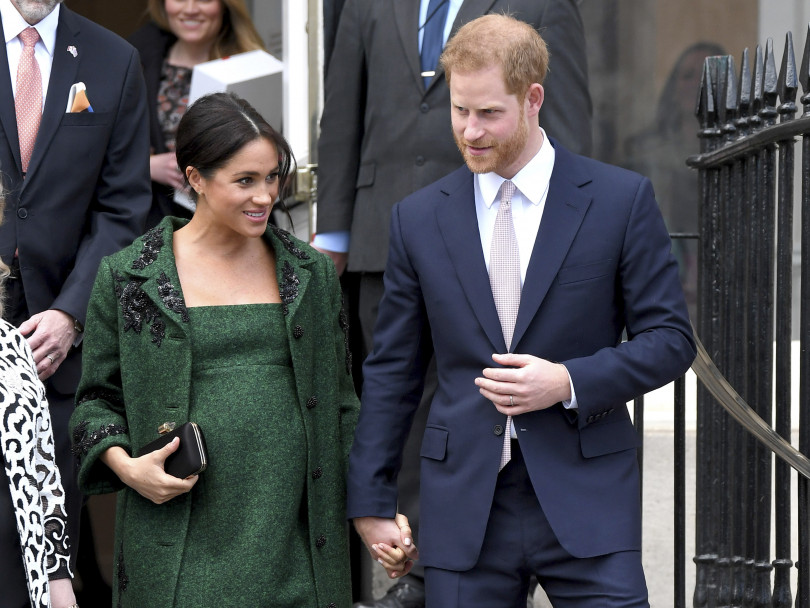 It’s a ritual of royal childbirth—the proud parents pose with their newborn child outside the hospital so that images of the new family can be transmitted around the world. That puts an extraordinary amount of pressure on the new mother—who has just gone through hours and hours of labour—to look her best, knowing that those photographs will be seen by billions. The man can wear pretty much anything, including rumpled jeans and a sweater, knowing that the focus will be on the mother.

Now, in an era of staged, manipulated social media “perfection,” will the royal family’s current superstar couple follow the old rules, or will Meghan and Harry start a new, more private tradition?

The first photos of a royal baby are used again and again and again, especially when those infants will be future monarchs, or their siblings. So it’s only natural for royal mums to want the help of a squad of hairdressers and stylists before facing a bank of photographers. Often, their appearances become more polished with the birth of a new addition to the family. It was the middle of the hot summer of 2013 when Kate, Duchess of Cambridge, and Prince William, emerged from St. Mary’s Hospital with Prince George. Her hair and make-up were casual, as was her blue polka-dot dress and wedge sandals. Two years later, her hair and outfit—including high-heeled pumps—were noticeably more styled and polished as she and William took Princess Charlotte home. And last year, when the Cambridges left the hospital the same day Prince Louis was born, Kate looked like she was dressed for a royal engagement rather than having given birth just hours before.

Kate isn’t the only one to make sure she looked her best for those iconic images. Both Diana, Princess of Wales, and her sister-in-law Sarah, Duchess of York, noticeably upped their style quotient for the hospital shots of their second children. For William’s birth, Diana reused a flowing maternity dress; for Harry’s appearance, her hair was coiffed and her outfit designed for the moment. The same transformation occurred with Sarah for Beatrice and then Eugenie.

Even Princess Anne glammed up (well, a bit) for her second baby, born in 1981. Though she wore the same vividly patterned shirt—she is the queen of royal fashion recycling—as when she left with baby Peter in 1977, she ditched the headscarf for a daytime bun when she left hospital with Zara.

Now, however, the pressures are far greater on new mothers to look good. And some are pushing back. In late March, Fridababy, an online baby supply retailer, took out a full-page ad in the New York Times titled “An open letter to the royal mom-to-be.” CEO Chelsea Hirschhorn pleaded with Meghan to be real: “Sure your blowout will be perfect for your hospital step photo-op, but people will be opining on all the wrong things—like how soon you will fit into your pre-baby wardrobe—instead of having an honest conversation about what women go through during birth or immediately thereafter.” It goes on, “If you really can’t skip it, then at the very least flash us a glimpse of the mesh underwear underneath to keep it real. They’ll all just blame it on a gust of wind, but with your help we’ll have made some real progress. We’re rooting for you on your path to recovery and hope you take all the time you need.”

So will Meghan, Duchess of Sussex, go full glam? Likely not, based on her style decisions when preparing for other big events. She prefers to use minimal make-up, letting her natural beauty shine through. Just before becoming engaged to Prince Harry, her all-but-bare face graced Vanity Fair, a sharp departure from the artificial “perfection” so often featured on fashion covers. As Vanity Fair noted: “One thing Markle noticed about how she was perceived was that ‘at almost every photo shoot they would airbrush out’ her freckles. ‘I’ve always loved my freckles,’ she now says, so when she was photographed for V.F., she was ‘thrilled to work with Peter [Lindbergh] because he rarely retouches and he believes in such little makeup.’ ”

MORE: Meghan Markle has…triplets? (And other highly improbable predictions for 2019)

Meghan kept to her minimalist make-up style for her wedding and for most of her royal engagements. Even her more glamorous looks, such as when she presented a fashion industry award to designer and friend Clare Waight Keller of Givenchy, are relatively low-key.

If Meghan keeps to her natural styling—perhaps including a trademark messy bun—she’s telling new mums that Instagram perfection is not necessary, that not everyone looks like they stepped out of a beauty salon after one of the most physically demanding experiences of their lives. Meghan’s appearance will bring a little reality into a world increasingly obsessed with projecting the “perfect image,” whatever that means.

And the influence of royal women should not be underestimated. Women celebrate that Kate has never bothered to hide her post-delivery baby bump after the arrival of each of her three babies. “This is the first celebrity-type new mom I can remember seeing with her post-baby bump so evident and just out there for the whole world to see,” said body shape expert Leslie Goldman to Shape after Kate gave birth to George. That touch of normalcy by one of the most photographed women of the world helps counter the pressures that new moms face to instantly lose their mummy tummies and fit into skinny jeans. Sure, five weeks after giving birth Heidi Klum flaunted a naked flat stomach on a Victoria’s Secret runway, but that’s all but impossible without a team of nutritionists and exercise gurus working 24/7.

Given the intense social media interest in the Duke and Duchess of Sussex—their new Instagram account set a record for reaching a million followers in a mere six hours (it’s now 3.5 million)—the couple may decide to avoid having their baby in London, with its guaranteed crush of attention. While Kate and many other royal mothers give birth in the Lindo Wing of St. Mary’s Hospital, making it easy for the media to gather for a photo-op, not all recent royal babies have been born there. The Queen’s daughter-in-law, Sophie, Countess of Wessex, and her husband, Prince Edward, live near Windsor Castle. Sophie gave birth to both of her children at the local National Health Service hospital, Frimley Park. Now, Meghan and Harry are living nearby, having just moved into their newly renovated home, Frogmore Cottage on the Windsor estate. The Sussexes could pick a hospital near Windsor instead of in London, in the hope of reducing media attention.

They could bypass the new baby photo op all together. After Crown Princess Victoria of Sweden gave birth to each of her children, she and her husband, Prince Daniel, released a casual snap of their growing family, their sleeping baby tucked into a baby car seat. Only after Victoria was home with their newborn did Daniel alone brief the media.

In the end, where Meghan and Harry have their child, and how the duchess dresses, is up to them. The duke and duchess have the freedom to break free of the strictures that encircle William and Kate as future king and queen. Given their track records, it’s likely the duo will use that liberty to establish some traditions of their own.