Detailed planning for official royal visits to foreign nations includes what they wear, right down to $10 earrings 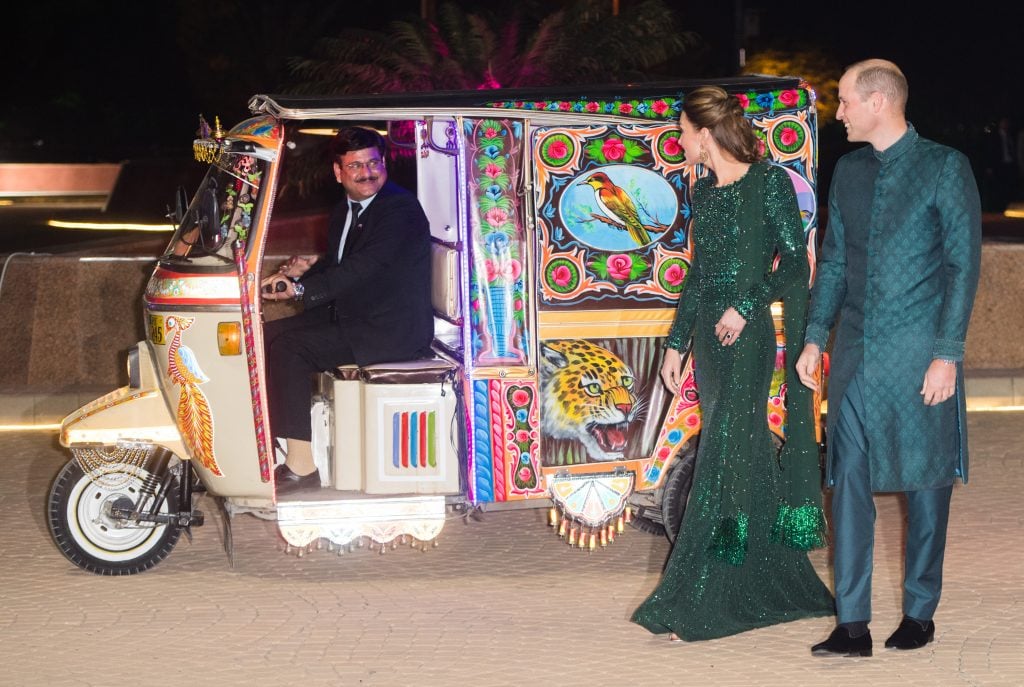 Catherine, Duchess of Cambridge and Prince William, Duke of Cambridge arrive at a special reception hosted by the British High Commissioner Thomas Drew, at the Pakistan National Monument, during day two of their royal tour of Pakistan on October 15, 2019 in Islamabad, Pakistan. (Samir Hussein/WireImage/Getty Images)

Official travel to foreign nations can be fraught with dangers large and small. There is a difficult diplomatic line to be tread between honouring the nation being visited and pandering. So, when royals travel, especially on official trips, they and their staff consult experts and spend a great deal of time making sure that every detail, however small, is analyzed. And a big factor is the sartorial diplomacy displayed by their wardrobes. Sometimes, it’s a detail as little as a $10 pair of earrings.

So, for the current five-day visit by Prince William and Kate, Duchess of Cambridge, to Pakistan, that effort started while they were still in Britain. Two weeks before their official tour started, they visited the Aga Khan Centre in London for a reception arranged in co-operation with the Pakistani High Commission to showcase the nation’s culture. Not only did Kate wear a long-skirted, high-collared dress in green, the dominant colour of the Pakistani flag, but she also wore glittering chandelier earrings (a frugal $10 buy) by Zeen, a line launched by a Pakistan-based retailer. It was a stylish acknowledgement of the nation’s conservative dress code.

That diplomatic homage continued when William and Kate descended from the Royal Air Force jet in Pakistan on Monday. Social media lit up the moment everyone got a look at her outfit, designed by one of her favourites, Catherine Walker, which included subtle nods to local fashions. A “modern twist to the shalwar,” wrote one Karachi-based Twitter fashion analyst. The long, slim-fitting dress in icy ombré blue, worn over slim pants, had chiffon draping around the neck mimicking the dupatta worn by many women in Pakistan. She again chose those Zeen earrings plus a clutch from the same retailer. (For the record, William wore a standard Western suit.)

They aren’t the first royals to build nods to local culture and traditions into their wardrobes. Queen Elizabeth II is famous for adding national emblems to her dress. In 1957, during her first trip to Canada as its monarch, she wore a dramatic Norman Hartnell gown strewn with green maple leaves (it now belongs to the Canadian Museum of History). And she’s loaned her Cartier diamond maple leaf brooch to a succession of royal women for their tours of Canada.

Worn #onthisday in 1957 by Queen Elizabeth II to a state banquet at @RideauHall in Ottawa, official residence of the Governor General of Canada. The Norman Hartnell gown mingled green velvet Canadian maple leaves & white roses, the emblem of the House of York. #OTD @CanMusHistory pic.twitter.com/08rEgTH3cA

Sometimes such royal wardrobe choices are just practical. Camilla, Duchess of Cornwall, is famously uncomfortable in extreme heat and so usually wears loose pants and tunic/dress outfits when she’s in hotter climes, such as during an official visit to India two years ago.

(To be clear, this is not about the Cambridges or anyone else wearing articles presented or loaned to them during visits, such as when the Blood Tribe of Alberta placed a feathered headdress on former prime minister Stephen Harper or the Maori robes that Prince Harry and Meghan, Duchess of Sussex, donned during their visit to New Zealand last year. Those moments occur at the discretion of locals, not the visitors.)

Such visitor choices can go horribly wrong. Last October during a trip to Africa, Melania Trump wore the jodhpurs and pith helmet synonymous with European colonial rule. And then there is the disastrous “dress-up” trip taken by Justin Trudeau and his family to India last year. “The costumes were fun on the first day but at some point one starts to worry Trudeau will show up at The Hague wearing wooden shoes,” Paul Wells wrote in Maclean’s. “Perhaps the next time the PM goes over fun wardrobe ideas for a foreign trip, somebody on his staff could ask whether he also plans to bring any project serious enough to counterbalance the elevated likelihood of coming off like a giggling schoolboy.”

Certainly, William and Kate didn’t fall into the Trudeau trap but rather made sure their sartorial choices never overwhelmed the purpose of their trip: to “pay respect to the historical relationship between Britain and Pakistan” by largely focusing “on showcasing Pakistan as it is today—a dynamic, aspirational and forward-looking nation,” as their communications secretary explained ahead of the trip.

And that meant that they weren’t going to ignore the problems facing Pakistan, but rather use the worldwide attention focused on their visit to highlight some ways changes are being made. In Pakistan, one of the biggest issues facing its children is the treatment of women. The Commonwealth nation is a deeply patriarchal country with huge gender disparities. Less than 15 per cent of girls are still in school by Grade 9, and many poor families can’t afford the cost of education even at government schools, Human Rights Watch reported last year.

So, the Cambridges’ first stop during their high-profile visit was to the Islamabad Model College for Girls to highlight the benefits of higher education and careers for women. Sure, Kate wore the traditional kurta (tunic and slim pants), but the focus was on the children. And, of course, there was a British link. As the Daily Express’s Richard Palmer explains, “It currently benefits from the Teach for Pakistan programme, a fast-track teacher training programme modelled on the U.K.’s Teach First scheme, which is focused on improving the quality of teaching in schools which serve families from disadvantaged backgrounds.”

That evening, the Cambridges flipped their fashion choices. Arriving at an outdoor reception by a traditional tuk-tuk, the duchess wore a classic “Kate” gown, a slim green confection by another favourite designer, Jenny Packham, while it was William who wore a traditional Pakistani outfit. His dark green sherwani was designed by Naushemian, whose workers spent two days making sure it fit precisely. “It was my pleasure to design something for the royal prince,” designer Nauman Arfeen told People. “That was a dream come true.”

That the royals stay on the right side of the fashion line between wardrobe diplomacy and dress-up is due in part to the fact that they didn’t wear such statement national outfits at the same time. Indeed, fully 75 per cent of the clothes worn by Kate during the first half of the trip were from her regular designers. Some, like the evening gown or the green coat by Catherine Walker that Kate wore to meet the prime minister and president, are items that can be worn again anywhere. As well, none of their choices could be labelled “flamboyant;” indeed, aside from Kate’s ornate earrings, they are as conservative as the couple wearing them.

Yet by seeking out and wearing so many accessories—especially earrings and shawls—designed by Pakistanis or Pakistani-Britons, she drew attention to their booming design scene, and helped their bottom lines. Those inexpensive Zeen earrings that she wore several times are completely sold out.