With a new emperor, Japan's male-centric royal rules are under scrutiny 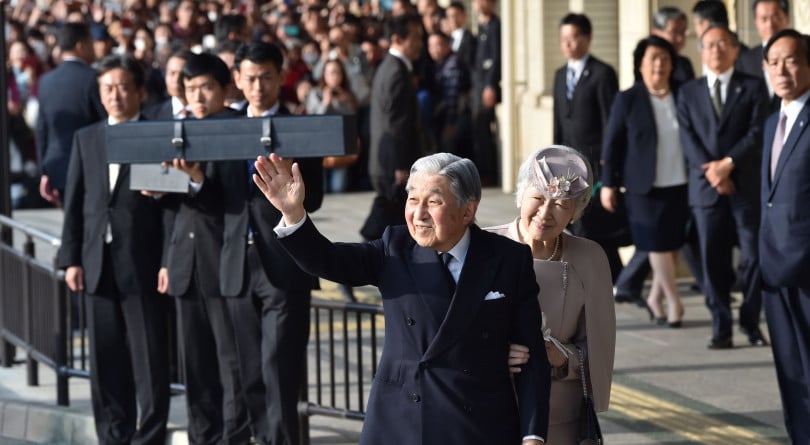 Japan's Emperor Akihito and Empress Michiko wave to well-wishers on April 18, as Emperor Akihito takes part in a series of rituals ahead of his abdication. (Photo by KAZUHIRO NOGI/AFP/Getty Images)

On April 30, Emperor Akihito will be the first Japanese emperor to abdicate in more than two centuries. It is such a momentous event that everything is being done to avoid any unforeseen problems. So, he made sure to inform his ancestors. In a series of formal events, he and Empress Michiko visited historic mausoleums and shrines. Finally, on April 18, Akihito, dressed in a morning coat and bringing two sacred treasures—the imperial sword and jewel—took his last trip as emperor to the famous Ise Shrine in western Japan, where ancestral deities of the family are enshrined.

This is not a royal family that plunges into crowds to shake hands, hold babies and pet dogs. Appearances are sedate and often scripted. Virtually every action by a member of the family is overseen by the deeply conservative Imperial Household and centuries of tradition.

That’s what makes this royal transition so unusual. It took a lot of pleading and prodding by Akihito, 85, to get the retirement he wanted after three decades on the throne. In 2016, in a rare televised speech to the nation, the emperor, who had been treated for prostate cancer and heart issues, told a stunned nation that he feared his advancing years could become a problem: “I am worried that it may become difficult for me to carry out my duties as the symbol of the State with my whole being as I have done until now.” Elliptically, he was asking for permission to abdicate. Eventually, the government acquiesced.

The transfer of power from Akihito to his older son, Crown Prince Naruhito, 59, exposes the increasingly fragile underpinnings of the world’s oldest continuous hereditary monarchy. Though there have been female rulers in the past, Japan’s Imperial Household Law of 1947 states that only male children in male lines can inherit the Chrysanthemum Throne. (And female royals, such as Akihito’s only daughter, Sayako, lose their place in the imperial royal family when they marry outside the family.) That is a looming threat. For while Akihito has four granddaughters, including Aiko, the only child of Naruhito and his wife, Crown Princess Masako, he has only one male grandchild, Hisahito, 12, the son of Naruhito’s younger brother and heir, Akishino. Meanwhile, outside Emperor Akihito’s immediate family, the only other male heir is the emperor’s brother, Prince Hitachi, now 83.

For now, all eyes are on Naruhito and his wife, Masako. Like his father, Naruhito fell in love with a commoner. While Akihito met Michiko at a tennis match, Naruhito first saw Masako Owada at a tea. He was the studious heir to an ancient throne. She was the bright diplomat with a stellar international career ahead of her. Both were multilingual and educated in the West. Both knew the strictures and pressures that would be placed on her as a future empress, most importantly to deliver a son. It took three tries for Naruhito to convince Masako to marry him. They wed in 1993. After a miscarriage, she gave birth to Aiko in 2001.

Almost immediately afterward, Masako vanished from public life. The official reason was an adjustment disorder, with symptoms of depression and anxiety, brought on by the immense pressures and changes to her life. Their dreams of foreign tours that would capitalize on her diplomatic skills were all but nixed by officials wanting her to focus on procreation. Reportedly, even calls to her parents had to be pre-approved by the Imperial Household. For around 15 years, Naruhito undertook most of his engagements alone.

But he never forgot his promise to protect his wife. In 2004, ahead of a solo European tour, he fought back when some observers criticized Masako’s absence from public life, saying, “It is true that there were developments that denied Masako’s career as a diplomat as well as her personality.” He went on, “Princess Masako, giving up her job as a diplomat to enter the Imperial Household, was greatly distressed that she was not allowed to make overseas visits for a long time.” She “has worked hard to adapt to the environment of the Imperial Household for the past 10 years, but from what I can see, I think she has completely exhausted herself in trying to do so.” Those were fighting words for a family that rarely says anything even remotely controversial.

Masako’s struggles have come to symbolize those of all Japanese women, who struggle to balance career and child-rearing in a male-dominated society, Rika Kayama, a psychiatrist and professor at Rikkyo University, told the Japan Times. Japan is last among G7 nations in terms of gender equality, ranking a lowly 11o of 149 countries in the World Economic Forum rankings of 2018.

In recent years, Masako has been seen more and more in public with Naruhito, who now looks both healthy and comfortable with her life. They’ve repeatedly visited people in the northern prefectures devastated by the 2011 earthquake and tsunami. And she’s expected to take on more duties after the May 1 transition.

The preparations for Akihito’s abdication didn’t end with imperial visits to shrines. On April 1, the government unveiled the name of Naruhito’s era—Reiwa, suggested by a Japanese literature expert and the first era name to come from Japanese, not Chinese, classics. As much of Japan uses the imperial era calendar instead of, or parallel to, the Western one, all computer systems will have to be tweaked when Akihito’s era, Heisei, ends when he leaves the throne. The job is so enormous that Microsoft is pushing out a special update and keeping staff on standby.

From April 27 to May 6, the entire nation will take a 10-day holiday to celebrate the end of the 31-year reign of Akihito and the start of the Reiwa era of his son. Businesses are gearing up, expecting a spur of consumer spending to temporarily boost the economy, especially since this transition isn’t marked by the mourning that follows an emperor’s death. After the enthronement of Naruhito, his father will be known as the emperor emeritus while his mother will be empress emerita, and they will eventually move into Naruhito’s vacated palace after renovations are completed.

Then, royal watchers will see how Naruhito and Masako make their mark on the Chrysanthemum Throne. Akihito’s reign was marked by his many interactions with ordinary Japanese, unlike his aloof father, Hirohito, who was worshipped as a god for much of his life. Akihito and Michiko also made foreign visits, and during many he expressed regret and sorrow for Japan’s past imperial aggressions. The couple were far more family-oriented than previous generations—she famously packed homemade lunches for her children’s school bags.

Naruhito is also breaking molds, especially in that he is very much a hands-on father to Aiko, now 17. The future emperor has described his time at Oxford, where he studied river transport, as some of the best years of his life. So it was no surprise that last year Aiko travelled to Britain, where she lived in a dormitory at Eton College, the school attended by Princes William and Harry, while taking summer school. The incoming emperor is also casual (and modern) enough to pose for selfies in Denmark.

But, as with all monarchs, duties will be paramount. On May 25, after a series of elaborate ceremonies and rites to mark his accession, Naruhito will welcome the first foreign leader to Japan since his enthronement: U.S. President Donald Trump.